My Review of Now Apocalypse's 1x07: "Anywhere Out Of This World" 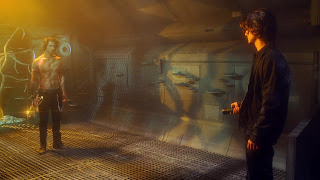 Gabriel (to Ulysses): "The human race is finito. It's the end of the fucking world as we know it."

Finally, we might actually be getting somewhere with the main plot of the series, between the hookups, fetishes and billboard posters. Then again, it might also just be an excuse to get Tyler Posey to blow a trumpet while shirtless in a dream sequence as well as being super cryptic about the world ending too. I guess it's open to interpretation though.

Still, even if Gabriel is still having a bad impression on Ulysses, then at least two people had a good one for him this week. Carly for all her scathing one liners was right in telling Ulysses to stop getting high for a bit and then there was the introduction of new love interest, Isaac (Jacob Artist) for Uly.

This show hasn't been shy in giving Ulysses plenty of hook ups but going by the dynamic of this episode, it seems like for the remainder of the season, he'll have a boyfriend in the non materialistic social worker. Heck, Uly even tried to hold off having sex with Isaac before the episode ended with the two of them getting it on.

Speaking of getting it on, I'm not surprised that Severine took Ford to a sex party and while his awkwardness was rather endearing to begin with, it wasn't too shocking that he soon got into the swing (pun intended) of things as the night went on. As for the fallout of his photos being used for a billboard campaign. There was none as no-one except Ford seemed to be generally that fussed about the whole thing.

As for Carly - aside from giving some decent advice to Uly and getting money for her pee from a client that's into that sort of thing, this wasn't a great one for her either. You'd think by now, she'd actually pay attention to the people she lives with before letting them do stupid stuff, but apparently not. Then again, this show's continued lampooning of woke culture at times is amusing to watch.

- The campaign that Ford's picture were being used for are underwear company, Andrew Christian.
- Pretty sure the other Starz production that Carly's awful roommate was watching was Outlander.
- Anyone else find it interesting that Severine seems opposed to drugs? Then again that sex party hostess's suggestion for weed was pretty gross though.
- Chronology: Exactly from where the previous episode left off to tie into Ulysses meeting Isaac for the first time.

Again, not much was advanced here but Anywhere Out Of This World did at least introduce Isaac and it'll be nice to see where things go with him and Ulysses before the latter wrecks it (as Carly prophetically managed to put it). With three episodes left though, the show does need to move the alien apocalypse part along in a more meaningful way.