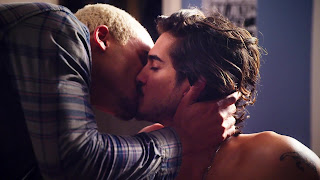 Ah, this was a rather sweet-ish episode. Well, any scene involving Ulysses and Isaac. Everything else was a lot less sweet, so let's focus on the best storyline before getting into the worst ones in this episode.

Ulysses and Isaac properly hooked up in the episode and it seems that they have the type of friends who both give them advice about not rushing into things. Of course it didn't stop the pair from being really into each other and generally being unable to keep their hands off each other. Two episodes in and I really hope Isaac will make it into the next season.

Just as importantly was Isaac vaguely throwing in a comment about there being an increased case of homeless people with serious delusions, so there was a tiny bit of the main plot being referenced here. Hopefully the next two episodes really do go further on this one.

As for the less great stuff of this episode - while both Carly and Severine raised points on straight men's general attitudes towards guy on guy action and submission, both women were mostly in the wrong in this episode as well. Carly more so out of the two but even Severine had some bad moments here.

- Tyce and his boyfriend (I think he's bisexual, he's definitely an Aquarius) are fans of Ford's underwear ads. He did seem more into Ford than Severine as well.
- Maybe if you're staying over, Isaac bring some mints in case someone doesn't have a spare toothbrush.
- Waterboarding and the baby stuff. Jethro suffered the most in this episode and to top it off, Carly also annihilated his acting prowess as well.
- Chronology: From where the previous episode left off.