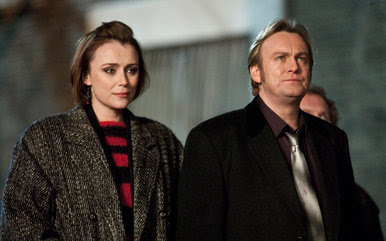 Five seasons is a long time to find out the entire mystery of someone as enigmatic as Gene Hunt but after 40 episodes and two shows, this final episode finally revealed everything we needed to know about the guv and then some. And I’m conflicted about things to be honest.

There are a lot things in a show that can polarise viewers and series finales are one of them. Next week, the internet will literally explode on both sides of the pond as people grapple the ending of Lost but this week, it’s closer to home with an ender so damn frustrating and divisive as this one turned out to be.

The scarred copper that Alex had been seeing all season – why didn’t I figure out earlier that it would turn out to be Gene Hunt? I certainly would’ve saved myself some time and it would've made me realise why Gene was so eager to keep Alex out of the loop for as long as he could. Only thanks to Jim, she finally got the courage to go to Farringfield to actually learn the truth.

Gene looked like he was going to kill her when Alex was digging up his corpse but instead it spurred him into telling her the truth, a truth about himself that he had been repressing for so long and while I wasn’t breaking out the tear ducts, I did feel bad for Gene when he asked Alex if he deserved a shallow grave. No Gene, you most definitely did not deserve one.

And then Jim practically appeared out of nowhere to gloat about Gene’s folly, happy to stir any further tension he could between Gene and Alex. While I’ve liked Daniel Mays’s performance in the series, I really thought that he was a bit too over the top in too much of this episode for my liking.

The mad hysterical bouts of glee he exuded as he crashed Gene’s world down, the way he was pummelling the crap out of Gene once they went back to the station, the choice of music in the car on the way to the station and showing everyone stars in the office. Yes, Jim was happy to get a wised up Alex, Ray, Chris and Shaz to pick a side.

I wasn’t too surprised when Alex told Jim to go to hell because that’s exactly where he was trying to lead Ray, Chris and Shaz there. Jim classically played on their insecurities in a bid to get them to come with him but for all his talk of Gene stifling them. Jim didn’t really have a clue towards the end, did he?

All Alex and Gene had to do was give them a sense of importance and soon enough, Jim’s attempts to drag Ray, Chris and Shaz back to hell blew up in his face. I laughed when Shaz made the eerie joke about dressing up as a dead woman being appropriate in the same way I couldn’t help smiling when Chris and Ray showed up to make sure that Eric didn’t get away from the scene of the crime.

I’m not gonna lie and say that I was gripped by the diamond heist subplot because truthfully I lost interest in all the cases this year because I was so impatient for genuine answers for the series but it was used effectively to show furthermore what a cohesive unit Chris, Ray and Shaz can be without Alex and Gene and also because we finally found out what happened to each and every one of them to wind up into Gene’s care.

We already knew what happened to Sam, Gene and Alex and here we learnt about the other three. Ray committing suicide because of his failure to get into the army and the death of a young lad was the most tragic of the bunch. That’s not to say that Chris getting shot and Shaz being stabbed were plain sailing but it was the one I found myself most effected by if that makes sense.

Still for all their deaths, this was the end of the road for them. They chose Gene over Jim and as a result like Sam, they were also effectively done as well. Having the Railway Arms back was a good way of bringing things full circle but it also served to remind Alex that there was no going back for her either.

She might not have chosen to remain in Gene’s world unlike Sam but she was also dead in her own world. It took looking at Jim’s watch to realise this and it also took some encouraging words from Gene for her to go into the Railway Arms as well. And the best part was that Alex and Gene finally got to share a kiss before she was complete.

However, even without the tedious gloating from Jim and the snarling (was that really necessary?) he did, it also reminded us that Gene was alone again. Then again, the arrival of a new copper in his kingdom bitching about his desk also went to prove that Gene Hunt’s work will never be truly done. Unfortunately that also means that he’ll probably have more altercations with more baddies like Jim to come as well.

So, the somewhat religious overtones of this entire arc – Gene the angel, Jim the devil of sorts. Well, it’s reasonably satisfying enough, though it reminds me a lot of Supernatural to be honest. On the plus side, at least this show didn’t end the same way that Life On Mars US ended. Now that truly would’ve sucked beyond belief.

But at the same time, there were some problems with it as well. I’m going to mention not seeing Sam because although I liked the Nelson cameo in this episode, I think it should’ve been Sam that everyone saw coming out of the Railway Arms instead; especially given all the teasing we had about him in this season particularly.

Plus I think the BBC should’ve made an exception and extended the episode’s running. If they could give “The End Of Time Part 2” a whopping 72 minutes to see out David Tennant from Doctor Who, then surely this episode deserved a similar length of time? Not seeing Sam in this episode disappointed me more than it probably should’ve done but at least Alex’s story ended on a believable note. I won’t fault that.

There were no opening credits in this episode but they did show us the main cast at the end of the episode.

Alex (in her dream): “I have to know the truth. The truth will set me free.”
The puppets of Alex and Gene in the former’s dream were freaky enough. And I knew that Jim would use Molly’s scarf to try and tempt Alex.

Shaz (on Alex/Gene): “Those two should either get a room or kill each other.”

Jim (to Alex): “You and Sam ain’t different. You both challenge this world Gene has carefully built for himself. That makes you dangerous.”

I can’t tell when Chris and Ray died but Shaz seemed to have died in the 1990s thanks to a certain Oasis song I can’t stand being played in the background during her death. And nice that Chris and Shaz got back together as well.

In lieu of an actual appearance from John Simm in this episode, we did see a shadowy figure that we were supposed to take as Sam Tyler.

Alex: “You helped Sam. Do I mean nothing to you, Gene? I only wanted to get back to my little girl, that’s all.”

Jim (to Alex/Chris/Shaz/Ray): “Oh come on! You didn’t really think this was a police station?”

What actually happened to Annie? Alex asked about her but I don’t seem to remember Gene answering that particular one.

Gene: “You looked good though.”
Alex: “I was dressed as a prostitute.”
Gene: “My point.”

Alex died at 9.06pm, which was something that also has been shown enough times this season as well.

Chronology: For the new recruit that Gene is going to have to deal with, it looks like he’s from the 2000s at least.

There’s a chance that I’ll edit this review somewhere down the line and add more to it. As series enders go, I’ve seen better and I’ve seen worse. The episode tied up a five year mystery better than other shows would’ve done and love him or loathe him, I don’t think anyone can deny the unbridled genius that was Gene Hunt. And never mind everyone else passing on, R.I.P. the poor Quattro instead.