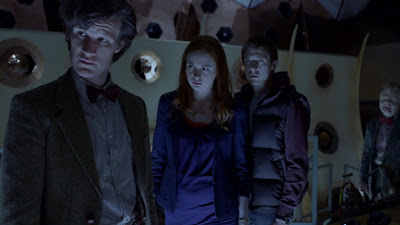 At some point in the series, we were always going to get an episode that would be a literal mindbender and in five seasons, I’m almost amazed that they managed to hold off until now. Two worlds to choose from and both of them were marred with their own problems? The problem was choosing which world was real and which wasn’t.

Of course this couldn’t be too easy on Amy. The world in which she and Rory were about to have their first child should be the real one but there was also the world with the two of them and the Doctor in the TARDIS. That also had to be real, right?

I think the bigger question was which world Amy wanted to be real all the more – one with madcap adventure or quiet domesticity. The Doctor or Rory? Surely, the girl could have both worlds/both men in her life, right? Not according to the Dream Lord she couldn’t. This was the episode where Amy had to choose which bloke she wanted more, so let’s look at them in detail.

Rory Williams is a nice guy. Nice in fiction terms tends to generate words such as “bland”, “boring” and “uncomplicated”. And it’s because of this that the Dream Lord has a few choice insults for Rory throughout the story. He seems to view Rory as a buffoon and views the world Rory could give Amy as dull.

With Rory, Amy would be married to an actual physician and live a relatively simple life with her husband and child, especially one where you’d have to endure bad amateur dramatics and pensioners who live into their nineties. In other words, Amy would be completely safe having a life with Rory Williams.

Except the Dream Lord was more than keen to point out the fact that whatever Amy had to choose, both worlds came with a dangerous price. In the cosy world with Rory, there were aliens decked out as pensioners turning everything in sight to dust and the visiting Doctor in this world really wasn’t that much help.

In fact the Doctor was at his most helpless in this world because the one thing he couldn’t do was bring Rory back when the latter died in the safe world. Rory’s death was an odd one in this episode because there’s rumours of something bad happening to him in the Silurian two-parter so it felt more like foreshadowing compared to anything else and Amy seemed to shut down for a few moments as well.

I wasn’t exactly expecting Amy to break down crying but her muted response certainly caught me off guard. However if you think that was supposed to mean that Amy doesn’t care about Rory, think again. It took this episode seemingly for her to realise how much she loved the bloke and while Amy technically wants both worlds, Rory turned out to be the man that she wanted romantically, not the Doctor. And that lead to the other bit of this episode - the Doctor’s world.

The Doctor has been letting Amy down since she was seven years old, by abandoning her and the Dream Lord knew how to play on that. Amy took a certain level of pride in her relationship with the Doctor and the Dream Lord came close to knocking it by revealing that the Doctor has a far more intricate history that she’s aware of. He even alluded to a certain redhead and not the one that I wanted him to reference.

Importantly, Amy was the only one in the TARDIS who got to talk to the Dream Lord by herself. Rory and the Doctor were rendered back to the land of nod and there were some interesting moments. It was her choosing to technically kill herself in the Leadworth world that seemingly defeated the Dream Lord but don’t get too excited.

I guess I should’ve seen the reveal about the Dream Lord being a result of psychic pollen wrecking havoc on the Doctor’s subconscious but I didn’t. It was a pretty satisfying reveal however and it certainly made me hope in a weird way that some more of that pollen comes into contact with the Doctor in the future. Does that make me a bad person?

As for the Dream Lord element of the episode, that reflection on the end did give us a strong indication that he won’t be a one episode only character. But the annoying thing was that the Doctor had to conceal that from Amy and Rory. We’re halfway into the season and with all the stuff that we’ve been getting, the Doctor really shouldn’t be holding back.

Surely that’s something that he would’ve copped onto during the events of this episode? The alien pensioners aside, the TARDIS literally became an ice palace as it was heading towards a cold star. Never has the TARDIS looked so magical and it would take something as disastrous as the threat of death to make it look that way. Then again, the heat got turned up when the Dream Lord surrendered to defeat and the Doctor pulled his own little stunt to make sure that himself, Amy and Rory survived the episode.

In terms of mystery though, this episode gave us another thing to think about – Leadworth. Is it really the village that time forgot? Is that why Amy’s memories are sketchy and there’s a general sense of weirdness surrounding her? The Doctor in dream world might have bleated on about Leadworth being dull but perhaps it’s not. Subconsciously he must suspect that something is up with that not so quaint little village.

In terms of performances though, this episode is a four piece. Arthur Darvill isn’t as served well in it as the previous episode but Rory continues to be a likeable and needed presence in the TARDIS and Karen Gillan certainly deserves props as well, given that this is her “Turn Left” type of episode, though not narrative wise of course.

However my favourite performances in this episode were between Matt Smith and Toby Jones. We’ve had some good villains this season but the Dream Lord is above and beyond the best of the bunch, which is why I hope that he’s not going to be a one episode character. For a moment, I thought they’d reveal him as the Toymaker with his meddling ways but I’m glad that he didn’t turn out to be that.

The scenes between the Doctor and the Dream Lord was where the strongest writing also came. Of course the Dream Lord would be able to really get under the Doctor’s skin and the taunting of the Doctor in his new form were more funny/effective than anything biting with Amy and Rory and they weren’t without effect. I think we could have a classic new series menace with the Dream Lord here. Sometimes the Doctor literally is his own worst enemy.
Also in “Amy’s Choice”

Amy is the third new series companion to have an episode named after her. After all, we’ve had “Rose” and “Smith And Jones”

The Doctor (to Amy/Rory, re Leadworth): “So, what do you do around here to stave off the y'know, self harm?”

The Doctor: “You’re a doctor?”
Rory: “Yeah and unlike you, I’ve passed some exams.”

Of course Rory would be a doctor in the Upper Leadworth. And that jumper that Mrs Poggit made the Doctor looked like something Matt Smith has worn himself.

Dream Lord (to the Doctor): “What should we call me? Well if you’re the Time Lord, let’s call me the Dream Lord.”

How many flipping costume changes did Toby Jones have in this episode? I did like that one of them was an almost direct replica of Eleven’s current attire.

Dream Lord: “One reality was always too much for you, Doctor. Take two and call me in the morning.”

Rory (re the Doctor): “I thought you’d chosen me not him.”
Amy: “You are always insecure.”
Rory: “You run off with another man.”
Amy: "Not in that way."
Amy made both the Doctor and Rory wear ponchos in the TARDIS when they were trying to get warm in the TARDIS. There was a lot of fashion critiquing in this episode come to think of it.

The Doctor: “I know who you are.”
Dream Lord: “Course you don’t.”
The Doctor: “Course I do. I've no idea how you could be here but I know there's one person in the universe who hates me as much as you do.”

This is the only episode so far where the Doctor has worn both variants of his costume. He was decked in the light blue shirt/dark blue bowtie and brace for the Upper Leadworth world and pink shirt/ red bowtie and braces for the TARDIS one.

Dream Lord (re the Doctor): “Poor Amy, he always leave you, doesn’t he? Alone in the dark. Never apologises.”
Amy: “He doesn’t have to.”
Dream Lord: "That's good because he never will and now he's left you with me. Spooky, old, not to be trusted me."
Amy (re Rory): “Save him. You save everyone, you always do, that’s what you do.”
The Doctor: “Not always. I'm sorry.”
Amy: “Then what is the point of you?”

Interesting bits from the Confidential this week were that Arthur Darvill accidentally whacked the actress playing Mrs Poggit at one point when shooting and he did look suitably embarrassed.

Dream Lord (to Amy): “So you chose this world? Well done, you got it right and with only seconds left. Fair’s fair, let’s warm you up.”

Another fashion bit but this is the only episode so far where Amy hasn’t worn a short skirt, though on a serious note she could’ve prodded the Doctor more on talking about past companions.

“Amy’s Choice” is an odd episode but it’s also the best one of the season so far, delving into the psyche of our TARDIS trio a lot more succinctly than before. Rory essentially wants the simple, Amy wants him but also the TARDIS life as well and this Doctor has a lot of issues beneath his youthful features.