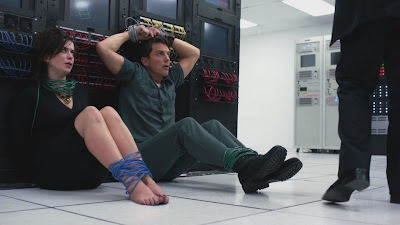 Gwen (re shot assassin): “He was just about to tell us.”
Rex: “Thanks, anyone? Thanks?”

Oh, Rex, I really do believe if you could go five minutes without being such an asshole, people like Gwen might be more appreciative when you come to their rescue. Granted, its good thing Rex did shoot that guy – the assassin was absolutely rubbish, wasn’t he?

Okay, so he presumably used dirtier methods to break into PhiCorp than Jack and Gwen did and he certainly had a glee during his scenes with Jack and Gwen but as an episode threat, he wasn’t that very engaging to be honest. I didn’t doubt for a second that would’ve slit Gwen’s throat but it still didn’t make me care about him as a villain.

On the plus side, at least he actually served a purpose with the info dumping exchanges between him and Jack in this one. This episode seemed to practically confirm that Jack’s responsible/connected to the miracle and there are families out there who have an axe to grind with the now mortal Mr Harkness.

Who they are exactly we didn’t find out, thanks to Rex shooting the trained assassin in the throat but I have a feeling that this series is finally going to get to the point and soon enough, we’ll find out who exactly is responsible for the miracle and why. At this point, PhiCorp only seem to be benefitting from the miracle rather than being the cause behind it.

Ah, PhiCorp – until someone other than Jilly steps out as a representative, they’re still very much a faceless group. Still though, their level of nastiness hit an impressive if scary this week when they found a unique way of dealing with politician Ellis Hartley Monroe.

I might have disagreed to a certain point about her whole ‘Dead Is Dead’ philosophy but even I didn’t expect that it would come to bite her on the ass so soon. Ellis believed that those who should’ve died should be segregated from the rest of society and now, thanks to PhiCorp, she’ become one of ‘Dead Is Dead’ herself given that she was crushed in a car.

Then again, things were going wrong for Ellis even before all of that, thanks to Oswald. Oswald was able to use his own ‘Dead Is Dead’ status to show a beacon of support for the same people in his position and managed to win himself some more press coverage, much to Vera and Ellis’s disgust and Jilly’s delight.

Four episodes in and Oswald is still a strange villain for me. On one hand because he’s a paedophile, he still makes my flesh crawl but on the other hand, I’m still not as compelled by him as I should be. Bill Pullman is doing a decent job with the character but at the same time, something about Oswald is lacking for me and this series to an extent.

Jilly on the other hand completely works for me in the villain stakes though. While she might be openly disgusted with Oswald in general, she’s also more than happy to be a good little PhiCorp lackey and benefit from Oswald’s successes with the general public. It certainly makes for a more interesting character in an episode devoid of decent villains too.

And when we’re not dealing with villains, our main players are also remembering they’ve still got families out there. Seeing Rex confront his angry and sick father should’ve made me feel bad for him but Rex blew it when he let his hypocrisy getting the better of him and started yelling at poor Esther.

Yes, it was reckless for Esther to go and see her sister and nieces and maybe even more so for causing her nieces to be sent into care but I can’t help sympathising with Esther’s plight more than I should do. Maybe it’s just nice that we finally got something on Esther’s background for a change.

As for Gwen – her phone conversations with Rhys were lovely, seeing Anwen was lovely but having her father taking off to Wales’s version of the Overflow Camp at the end of the episode made for a predictable cliff hanger. That being said though, I guess it was to be expected though.

Meanwhile the only character in this episode that actually felt short changed was Vera. The endless hospital scenes might be needed but they are becoming something of a chore to watch and Vera needs more to do than just churn out exposition. The sooner she joins Torchwood at this point, the bloody better for all of us.

Also in “Escape To LA”

Esther’s sister was named Sarah and her nieces were Alice and Melanie. Sarah was put into psych I think during this episode.

Rex’s gay jokes and comments – are they supposed to highlight homophobia or is it him trying to be funny?

Jilly (re Ellis): “Looks like you got a rival. You better think of a line, Oswald or you’ll be yesterday’s news.

I had to laugh at Jack using the John Smith alias during his interaction with Nicholas but Gwen’s attempts of an American accent were terrible.

Jack (to Gwen): “You are so never doing that accent again.”

Four episodes in and at this point, we could really do with some more scenes outside of the US – particularly in Wales.

Chronology: A couple of hours from where “Dead Of Night” left off. No further signs of the Soulless in this one though.

Easily the weakest out of the four episodes aired so far. Though it’s nice that “Escape To LA” progressed some stuff, the episode itself wasn’t as engaging as the previous one and I still doubt that whether or not this whole premise can be sustained for such a lengthy time period.