And here is the third of my Comic Con themed blog. It's True Blood folks .... 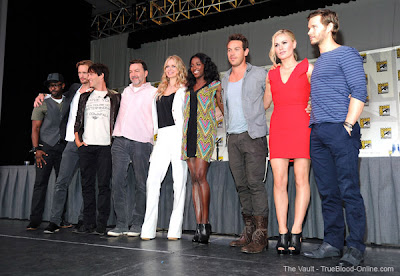 The cast gathered and they were definitely the longest panelists that were there. Also much to a lot of fan joy, it seems that this year, Alexander Skarsgard was also present and accounted for. Oh and we got a trailer for the second half of Season 4.

Bill's found that Sookie and Eric are getting closer and he's far from pleased with that little tidbit of information. He's going to be even less pleased when his attempts of giving Eric the true death backfire on him too.

Jessica looks like she's about to walk in daylight but could that be down to Marnie or something else? Both her and Hoyt have issues they need to hash out and there will also be a growing bond between Jessica and Jason in the latter half of the season as well to contend with.

Marnie's going from meek mouse to witch possessed. In the trailer, she's activating a bigger coven and fighting vampires in quite a brutal manner. I was hoping for Marnie to up her game as a baddie and now she is. Thank you, show.

Elsewhere when Sam isn't pissing off Luna's ex and Andy isn't struggling with his addiction to V, it seems that Debbie's true colours are emrging again. I knew that the second Sookie and Alcide got closer (they're not a couple), Debbie's jealousy would escalate and it looks like she tries to take Sookie out, once and for all.

Other scenes in the trailer included a fire, Sam turning on Tommy again, Tara slaying vampires, Naomi being attacked, Bill,/Eric/Nan in bondage and multiple fantasies about Sookie in a slinky red dress. Oh and she's been shot in a graveyard but if a coma couldn't keep her down, then neither will a bullet, will it?

True Blood continues to air Sundays at 9pm on HBO.