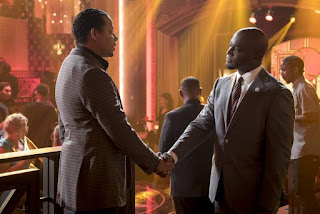 Jamal: "That man was being so polite."
Cookie: "I don't trust polite people, stupid."

I have to admit that last week's episode didn't really pull me in and wasn't exactly the show at it's best but this episode certainly was a step in the right direction.

First of all, the best moment this week was seeing Jamal, Andre and Hakeem all together in one scene. Okay, that's hardly unusual but the reason why the scene stood out more so this week was because all three of them acknowledge their current problems and promise among themselves to get themselves back together. Then the episode ended on that note.

Seeing Andre getting arrested by two asshole cops at the end of this episode was something I could do without. Given the current political climate, I can see why the writers went with this storyline though and given that Andre was doing was just simply collecting the rest of his things from his old home made it even tougher to watch.

Another brilliant moment for Andre this week though was his scene with Cookie. Cookie's never been able to deal with his bipolar (despite her best attempts at trying) but I loved seeing her trying to reach out to him this week, even if her mind was elsewhere.

Cookie had something of a balancing act this week. When she wasn't resisting Lucious's OTT attempts of wooing her back (and going over past history in flashbacks), she was also trying to get Jamal back on track with his music and butting heads with friendly politician, Angelo (Taye Diggs), who by the end of the episode even managed to rub Lucious up the wrong way as well.

I do like that Cookie is still standing her ground with Lucious, even though I am seriously loving the flashbacks between the two of them. Their history continues to be such a compelling part of the show, even if Cookie is better off not letting Lucious back into her life and with Angelo around, Lucious will probably have another obstacle in his mission to get Cookie back too.

- It's pretty obvious the show plans to go somewhere with Hakeem/Nessa too as they've set Shyne up as an obstacle for them. I kind of love that Anika is afraid of Leah as well. We also heard Rhonda and Becky could be on the way out if she listens to her boyfriend.
- Tariq's webcam in the bear plot came to an abrupt end. I did like his inclusion in the Lucious/Cookie flashbacks. Angelo is also the new Berry too, right?
- Standout music in this one was Hakeem/Nessa's Remember My Name and Biz Markie's Just A Friend.
- Chronology, not long from where Light Into Darkness left off.

This was a far better episode than last week's opening one. Sin That Amend had some glorious character interactions, better music and the flashbacks were superb. Good one, show.