My Review of How To Get Away With Murder's 3x01: "We're Good People Now" 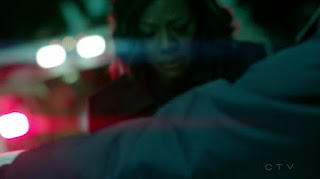 Annalise (to the Keating 5): "We're good people now. Say it to yourself until you believe it.”

Continuing with the onslaught of catching up with new shows, the third season of ABC's popular crime series came back with an interesting bang, a shock (unknown) death, a break up and several interesting flashbacks and one of the better cases of the week.

The flashbacks first are somewhat scattered but over the course of the summer, you've got Annalise and Wes realising that Frank somewhat set them up with the Wallace Mahoney public shooting, but it led to a scene where the two of them exorcised that particular demon and came to peace with one another, which was nice.

The other flashbacks though, ranged from Annalise giving Laurel an ultimatum to cut Frank out of their lives (which Laurel seemed to actually do), promising Connor not to give Oliver a job (which she later went back on), refusing to loan the newly poor Asher any money and helping Michaela out of a DUI as well.

In the present day though, there were bigger problems to be had. First of all, Oliver did ask for a job from Annalise, managed to bag one and then dumped Connor when the latter didn't blow up over Oliver sabotaging his attempts to get to Stanford last season. I have to admit, I found the break up scene with Connor and Oliver somewhat odd but right now, seperating them might be a good thing. I do however hope that it's not a pernament one though.

Of course the big buzz about this episode was the body found in the Keating house at the end. Who's come a cropper this time? Is it Frank? Nate? Oliver? Wes's new girlfriend? Someone else? Either way, it generated a pretty strong reaction from Annalise and this season is apparently promising that every episode until the mid-season finale will rule out a potential victim as well.

As for the main case of the week, it was one of the better ones we've had. We had an immigrant named Kareem taking the fall for his daughter's possession charge and despite some moments where it looked like Michaela and Wes were going to crack the case, things went pear shaped towards the end of things. It's still one of the better cases we've had though.

As for Frank, well he's certainly in no-one's good books these days. Even Annalise had an unsuccessful attempt to take him out, which also makes me wonder if he won't be the body found. Then again, I'm not sure how he can get back into Annalise's good books after the events of last season though.

- Mr Drake, the fellow law student in the class and Wes's second in command seems to be a non fan of the Keating 5, who not so shockingly are the lowest scoring members in Annalise's actual class.
- Nice to have Lauren Velez on the show as Soraya. I hope the show utilises her well before she leaves. I also don't think Frank is the one sending the 'killer' posters to Annalise.
- What Frank has lost in hair. Connor seems to have gained a little. Annalise seems to have a new look as well.
- Excluding flashbacks, we've jumped ahead four months since the events of Anna Mae.

One of the stronger opening episodes I've seen this week. We're Good People Now saw Annalise wanting to change a new leaf but things slipping back into murky territory once again. I'm curious as to whom the body will end (please not Oliver) being.