My Review of Gotham's 3x11: "Beware The Green Eyed Monster" 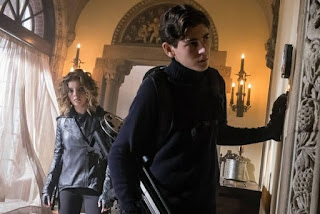 Barbara (to Nygma): "Think about it, Ed. Your brains, their brawn, my me."

Into mid-season finale territory now and this certainly wasn't a dull affair as quite a lot of new things were neatly set up for the second half of the season, including the return of yet another formerly dead character.

First of all though, how much like a future Batman and Catwoman were Bruce and Selina in this episode? Okay, it's hardly the first time they've been like that but this week we saw the both of them along with Alfred and Whisper Guy plan to break into the Court of Owls vault to get the thing they're so bent out of shape about.

It was more of a side plot but actually a lot more interesting even the artifact itself turned out to be an actual glass owl. Then there was Talon bumping off the rest of the Whisper Gang before attempting to kill Alfred, Selina and Bruce. However it seems that this situation was the perfect moment for Selina's mother to be added into the mix with Banshee's Ivana Miličević taking on the role of the mysterious Maria.

Going into the second half of the season, it'll be nice to learn a lot more about Selina's family situation but it also raises the issues as to why Maria would let her teenage daughter live on the streets. I really do hope the series doesn't waste the character and the potential dynamic that's there with Selina and her estranged mother.

Speaking of dynamics, this episode might have torpedoed Nygmobblepot for the time being. Barbara pretty much spelled it out to Edward that Oswald was responsible for Isabella's death and when Nygma realised that the current Mayor was in love with him, it was apparently enough for Edward to indulge Barbara's scheme to become Gotham's underworld supreme. If she succeeds where Fish failed in the first season, I'll be genuinely impressed.

As for the main meat of the story, it was a sort of resolution to Alice Tetch's blood story (or was it?) with Gordon doing his damndest to persuade everyone that Mario was infected with the blood (after Jervis let slip during a brief scene) and everyone else proceeding not to believe, including Leslie who then married him.

Of course, Falcone eventually realised that his son was infected with the blood and let Gordon off to get him with the latter promising not to kill Mario. Of course that promise soon disappeared when Gordon had to save Leslie from being stabbed by her new husband. Leslie wasn't even married a few hours before becoming a widow but either way, Mario might have succeeded in his bid to turn Leslie against Gordon, once and for all.

- The trailer for January episodes have shown that Jerome will be returning or will he?
- Ivy and Barnes sat this episode out. I found Jervis's paper mache hat hilarious. At least we know you can do arts and crafts while at Arkham these days.
- The music for this episode during the Leslie/Mario wedding scenes stood out a bit more than usual. I'm curious as to how many people were there for Leslie though rather than the Falcone family.
- Chronology: From where Time Bomb more or less left off.

Beware The Green Eyed Monster was a solid mid-season finale. Ultimately, there was more set up than pay off with certain plot strands but going into 2017, at least we have plenty of things to look forward to and dissect.