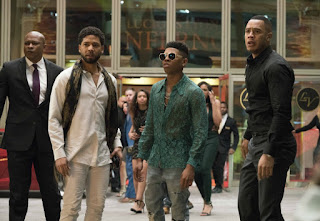 If there is one thing Empire can certainly deliver upon, then it's a finale. The previous two have seen Lucious arrested for his crimes as well as Rhonda and Anika going over a roof. This one went for a car bomb and a bout of amnesia for Lucious and as soapy and cliched as that sounds, it's actually worked well for now.

This episode almost seemed to go out of it's way to try and redeem Lucious. First of all, he kicked Giuliana to the curb and chose Cookie and when both of them met up with Barry and Michelle (not them, Cookie's ex-boyfriend and his wife), it was enough to motivate Lucious to actually hand over the keys to the kingdom to Andre.

While Cookie might have been successful in calling off her potential act of sabotage for Lucious's Las Vega gig, Andre fared less successfully as Shyne went ahead and blew up the car, which didn't kill Lucious but certainly put him a coma with Nurse Claudia (Demi Moore) watching over him and of course, the old amnesia plot.

I think with this plot, we're going to see the Lyons struggle to keep Lucious onside, the DuBois's up their campaign against the Lyons and of course, that creepy doctor also getting her claws into Lucious as well. Speaking of the DuBois lot - Diana revealed that Anika was in on the Bella storyline all along while Hakeem is now under their thumb along with an unwitting Jamal though.

However while Anika was happy to play along with Diana's revenge plan and use her own child as a tool in it, Leah managed to frame her for Tariq's murder. I just love how delightfully evil Leah was with Anika in the episode and her scheming certainly paid off big time. It'll be interesting to see if Anika's alliances with the DuBois will be able to get her out of this one though.

- Another member of the DuBois posed as a singer and managed to seduce Jamal. Damn and I was hoping Jamal was finally gonna get a decent love interest.
- Given the rumours of Nia Long being a nightmare on set, I take it this is the last we'll see of Giuliana, though I'm hoping we'll see Charlotte again though. I did laugh that her husband was called Mitt.
- Standout music: Warren's (Terrell Carter) Born To Love U, Lucious's Dream On With You and Jamal's Mama.
- Not long from where the first part of this one left off. The show will be paired with Star from September onwards and will be getting an 8pm timeslot for FOX viewers.

Toil & Trouble Part 2 definitely delivered as a finale. While the show's ratings have noticeably slid this season and inevitably, that was always going to happen, I do think the quality while shaky to begin with, did manage to get back to the same levels as the show's first season. This was a great way to end this season while setting up next year for viewers.