My Review of Gotham's 3x16: "These Delicate And Dark Obsessions" 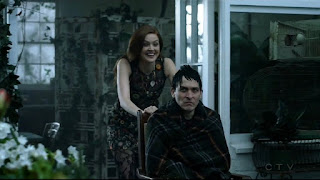 Ivy: "Words always hurt me way more than sticks and stones."
Oswald: "Yeah, me too."

Well, this is certainly an inspired pairing now isn't it? Not in the romantic sense for obvious issues of course but more in the sense that having Oswald and Ivy suddenly becoming besties was the very thing to add a little spring into the show's step.

Playing off each other extremely well, both Maggie Geha and Robin Lord Taylor were a delight to watch as Oswald found himself bemused by Ivy's fascination in looking after him before unwisely trying to abandon her in favour of Gabe coming back into the mix.

Unfortunately for Oswald, Gabe's true colours emerged in this one as he made it clear that he had no respect for the former Mayor and was willing to sell Oswald off at an auction for anyone who wanted to kill. Because Oswald treated Ivy so shoddily to begin with, she could've easily left him to his own devices but instead used her perfume to get rid off  the extra baddies while Oswald lost his shit and killed Gabe with a gardening tool.

A bit like with Oswald's previous connection to Nygma, a part of his new found connection to Ivy seems to be born out of the two of them not having anyone else in their lives at the moment but unlike with Nygma, it's clear they're going for a sibling type dynamic between Ivy and Oswald and it's certainly going to be fun as Ivy also plans to help Oswald with an army of freaks.

Because of this, it won't be just Nygma who should be worried about Oswald coming back but Barbara too. She might have skipped out on last week's episode but this week we learned she's become the Underworld Queen and was even willing to do Jim an old favour before an unpleasant visitor showed up at the warehouse where herself and Tabitha were torturing a guy for information. Seeing Babs as the queen of the underworld is nice but I have a feeling she shouldn't get too comfy in her new role just yet.

As for the main meat of the episode - it's mostly Court of Owls stuff. On one hand, you've got Bruce in the middle of nowhere getting jabbed with trippy acupuncture needles and reliving his parents death as part of his training from an old guy who isn't Ras al Ghul while Gordon himself was getting more information about his own family's connection to the Court just before uncle Frank blew his brains out and Gordon decided to meet with Kathryn. No guess for how that meeting is going to pan out next week, huh?

- Leslie was visiting Mario's grave and had a tirade with Gordon again as did Falcone, when the latter wasn't discussing his own relationship with the Court of Owls.
- Aubrey has gone back to being Mayor in light of Oswald's death/disappearance.
- Selina, Nygma, Butch, Barnes, Lucius and Alfred all sat out this episode.
- Chronology: Not long from where How The Riddler Got His Name left off.

These Delicate And Dark Obsessions didn't really do too much to intensify the Court of Owls and Frank turned out to be an extremely wasted character but between Barbara clearly having the time of her life as the Queen of the Underworld and every scene with Oswald and Ivy, there was a lot of fun to be had with this one.