Sense8 - I Have No Room For Hate In My Heart 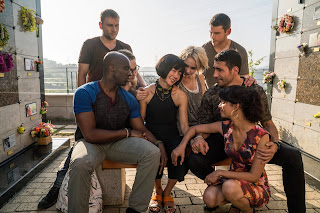 BPO Contact (to Riley): "That voice never shouts, it only whispers."

Well, this one ended on another shocker, didn't it? Riley's trip to Chicago saw her meeting up with Will's former partner, Diego and encountering that rather cryptic BPO contact who gave us a bit more information on Whispers while Will encountered Jonas just as himself, Wolfgang and Sun were about to take out Whispers. I didn't see that one coming to be honest.

I guess Jonas being alive though shouldn't be too shocking as we didn't really see him graphically die but him appearing at the end still surprised me. It seems though like Angelica, perhaps Jonas is now under Whispers influence too, giving our Clusters one more disadvantage to contend with as well.

I quite liked Riley going on her own and meeting up with Diego and then the BPO contact in Chicago. I also liked that while Will was naturally worried about her, everyone else believed that she would be fine and even the tension with Diego and Will too was nicely handled. However Riley's excursion to Chicago wasn't the highlight of the episode.

If anything, it was Sun who had the highlights for this particular one. First of all, there was the poignant scene where she visited her parents grave with the other Clusters offering her advice on her brother and then there was the rematch between herself and Detective Mun.

Seriously the flirting and fighting with those two was off the charts to watch. Immense chemistry between and it's great that Mun genuinely seems to believe in Sun's innocence as well. However I can't help but think that Sun is going to end up considering Wolfgang's advice in how to deal with her brother than wait for Mun to arrest him though.

Elsewhere we had some conflict between Capheus and his mother when Zakia let slip out about the former getting into politics while Kala and Rajan also conflicted over the latter's lack of ethics with shipping off dangerous drugs to other countries. While I'm glad the show is giving Rajan a little more of an edge, I don't want him to become a baddie though.

- Some nice downtime scenes with Nomi and Amanita as we got more scenes with the latter's mother and three fathers. Some rather pointed comments on terrorism, which in light of recent events stuck out more.
- Todd, the Cluster member that didn't want to be one shot up a church on Whispers orders. The Old Man from Hoy also made another appearance this week.
- I loved the subplot with Lito/Hernando protecting Daniela from her abusive ex and awful parents. The hot guy who hugged Lito in the lift after the latter lost his agents was another high point of this episode.
- Not long from where Isolated Above, Connected Below left off.

I Have No Room For Hate In My Heart delivered on the beautiful moments, the topical moments and certainly the shocks. It's also become one of my favourite episodes from the season and with four more to go, I really don't want this show to end.