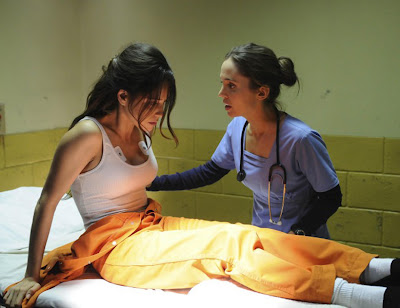 Topher (to Adelle): “You are the coldest bitch on this planet.”

Coming from Topher, that’s a lot more powerful than you would expect it to be. Adelle turning to the dark side – why is this more alarming than it appeared on screen? It’s not like Adelle isn’t soiled with her association with the Dollhouse anyways but enabling Harding in a big way was a shocking turn of events.

In a lot of ways though, it shouldn’t be. Adelle might have something of a conscience but she’s a survivor through and through and thanks to the events of this episode, it’s easier to see why she would handover Topher’s schematic on a method of imprinting anyone at large. Even without taking in “Epitaph One”, there was an inevitability here.

Adelle was backed into a corner and reduced to nothing more than a servant in her own house, which to her was probably a fate worse than death in many ways. Harding took a lot of pleasure in humiliating her as possible, even to the point where she had Topher as a higher up than her. That’s not very comforting for the old ego, is it?

More to the point, Rossum were fairly advancing their technology, so even if Topher had actually not told Adelle about his little advancement, they would’ve probably figured it out at some point anyways. And Adelle managed to get control of her house back so she stands a chance of fighting Rossum in her usual position than the lesser role she was reduced to.

But it doesn’t justify the stinging level of callousness that she displayed to Topher when he realised that she stole his schematics and gave them to Harding. I don’t even like Topher a goof chunk of the time and I feared for his life. Also with Adelle’s morality taking a hit, the episode did balance things by showing Topher’s more compassionate side.

Especially when Echo was brought back in. Adelle’s gut reaction was to deprive her of any treatment to see if she could withstand it. There was a level of cruelty in Adelle that I would equate with some of the male characters we’ve seen on this show and as a viewer, I did not like it one bit.

One the other hand, she also knows that Echo’s special and a part of me is hoping that she’s going to aid Echo in taking out Rossum. Again leaving the events of “Epitaph One” out of the equation. She also wisely didn’t believe Paul’s claims that he was nursing Echo back to health for a week and even seemed a little suspicious of Boyd as well.

Echo on the run actually made for an interesting story. In blank state I did feel bad for her and Galena both trying to get food and being denied. I felt even worse for Galena, who suffered a lot of cruelty at the hands of some racist cops during this episode. This is why I’m far less critical of this show going all a little Prison Break with the first voluntary mission we’ve ever seen Echo embark on.

The nurse guise was an interesting touch and the whole wanting to bust Galena out of prison made some sense. Echo felt responsible and wanted to do something right. Galena was being victimised and was generally a harmless person. And let’s face it; Echo’s had the misfortune of helping far less deserving cases during her time.

The prison breaks had their moments, especially with Echo bouncing back and forth between different personalities. Ultimately she succeeded in freeing Galena, who was grateful for the help that Echo and Paul (from the money/fake passport side of things) gave her. This was definitely a mission worth caring about.

And then there was Paul and Echo. It’s not gonna happen – I’m never gonna care enough to ship these two but them playing house and training up was something I could get into. We were seeing them being proactive in trying to take down the Dollhouse and helping Galena in some way was supposed to be preparation for that.

But in terms of their relationships, it seemed one sided again. Echo tried to make the moves on Paul and he wouldn’t budge. He was probably trying to be an honourable gentlemen but there was also the chance that Echo’s fears of him thinking of her as a freak or not real were actually justified.

Viewers have been unable to connect to Caroline as a character and it hasn’t helped that we’ve seen anything to really make viewers root for her. The Bennett memory seems to have made Echo more determined that she has a right to live. I can’t believe that there’s a part of me that actually agrees with as well but it still doesn’t morally mean that Caroline should be wiped out of existence either. Damn this show’s moral quandary.

No prizes for guessing that Echo would adopt the name of Jane when posing as a nurse. That’s my mother’s name as well.

Ivy: “So what happened?”
Topher (re Bennett): “I punched her in the kisser.”

I just realised that Topher’s essentially been betrayed by two females that he’s held in high respect in two episodes. I mean Adelle and Bennett.

Echo: “Where’s the tree?”
Store Owner: “Right through that door.”

Echo (to Paul): “Sometimes a girl likes to be chaste. Hungry?”

There was no continuity on what happened to Daniel in this episode. Presumably Rossum have either wiped him or put him in the Attic.

Paul: “Thirty six personalities and not one of them can cook?”
Echo: “Look who’s talking.”

Echo (to Paul, re Caroline): “I’ve been saving this body for her but I’m not her.”

According to Echo, she’s been made gay seven times, which is interesting given that we haven’t seen in on the show. Unless that flashback scene with Claire/Whiskey in “Vows” is supposed to count as one of those times.

Boyd: “We need to take this house back.”
Adelle: “And how am I supposed to do that?”
Boyd: “The Adelle I knew wouldn’t ask that.”

Galena (to Echo): “You are the strongest woman I have ever met. Thank you.”

There are now 23 Dollhouses including one in Dubai. Harding took issue with Victor and Sierra (who were imprinted as doctors) grouping and told Topher that he was sending Sierra to Dubai. The bastard.

Adelle (to Topher/Paul/Boyd): “Come on, we all know Echo’s special, let’s see what she’s capable of. It’s good to have to you back, love.”

Chronology: Three months since the events of “The Left Hand”.

“Meet Jane Doe” had the trappings of being more mundane than I thought it would be but a lot actually did happen and it’s good that things aren’t slowing down. Rossum are getting progressively worse and Echo better think of acting on her plan fast.

I liked this episode, Eliza Dushku was on fine form, though I think the actors playing Adele and Topher beat her on those stakes (again). Still its one of her best performances. Ballard and Echo even had some sexual chemistry in this episode which we haven't seen before- though admittedly he's still a bit creepy with her.

It was intriguing and I liked that we're now rushing towards the Epitaph future, it makes for a mush more interesting future.
The time leap was a brilliant idea though a bigger leap would have made it more convincing.
Adelle really was a bitch when she gave the schematics to Harding, I'm interested to see if she's really following down this dark path or if its a ruse.

I'm hoping that with Adelle, it's a ruse because we do now that she goes against Rossum at some point in a big way.

The series finale aired last night in America. Only six weeks here for it.

She does doesn't she?
I don't really remember a lot of Epitaph one, must re-watch it before Two.
Can't believe its only a few weeks, it felt like we were loads behind.