Torchwood US? Please Tell Me Someone's Taking The Piss 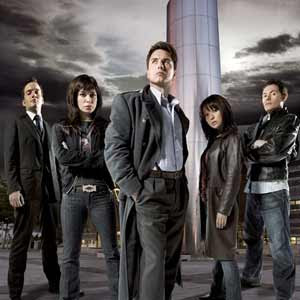 From the Hollywood Reporter
Huge news for sci-fi fans: Fox is developing a stateside version of the U.K. hit series "Torchwood."
The project is from BBC Worldwide Prods., with original series creator Russell Davies writing the script.A more straight-faced spinoff of "Doctor Who," "Torchwood" is about a covert group that investigates and fights alien activity.
Two series aired domestically on BBC America as well as last year's well reviewed stand-alone miniseries, "Children of Earth," which broke all ratings records for the network.
Unlike U.S. adaptations that have gone awry, "Torchwood" fans can take comfort that the original producing team is on board. In addition to Davies, exec producers include Davies' producing partner Julie Gardner (former head of drama at BBC Wales for the show's first season) and Jane Tranter (another BBC vet, now exec vp programming and production at BBC Worldwide Prods. in the U.S.).
Also, some of the current cast -- most likely John Barrowman, who plays the immortal Capt. Jack Harkness -- might star if Fox orders "Torchwood" to pilot. As for the new show's plot, the U.S. version will contain a global story line compared to the more localized sensibility of the first two BBC seasons.
Tranter might try to reboot "Doctor Who" for U.S. audiences while departing "Doctor Who" star David Tennant stars in NBC's pilot "Rex Is Not Your Lawyer." "Torchwood" (which is an anagram of "Doctor Who") debuted in 2006 on BBC 3 and set ratings records, then was moved to BBC 1. Russell also reinvented "Doctor Who" in 2003 and was writer-creator of the series "Queer as Folk."
Opinion Piece
This is the part where usually I try to be objective and try to see an upside but seriously, what the fuck? Why the hell does there need to be a US version of the show? What purpose does it actually serve, except to muck around with potential continuity? When are US networks finally going to cop on and realise that they don't need to do their own version of successful British programmes? Surely the growing failure rate of US versions of Brit shows would've been a big enough indicator at this point. And you just know that they'll desexualise Jack (if John Barrowman's even in it) or force RTD's hand into making him straight. Plus they'll probably jack it in after six episodes if the ratings don't get over 4 million. And realistically there are some British franchises that no other country should try to do their own version of - EVER! Let's hope this one doesn't get picked up, eh? And that we get a fourth season of the proper show of course.
Posted by shawnlunn2002 at 4:12 PM