My Review of Brothers And Sisters 5x10: "Cold Turkey" 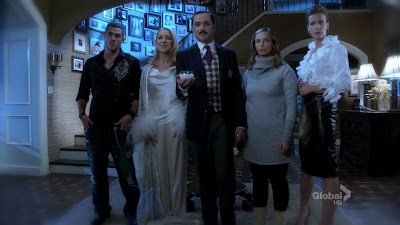 Okay, ever hear of the episode where Nora had a nice sleep that resulted in a nightmare scenario where her kids and Holly were plotting her death during Christmas? Well, you have now and in moments of sheer silliness, this is actually a hit for the series this season.

The idea of Nora actually deciding not to go overboard and instead just go to Santa Fe with Karl was a shocker. This is Nora and going overboard is pretty much her thing but I guess her eschewing Christmas from her kids wasn’t going to be big enough, so some predictable routes had to be taken so that this episode would feel true to the character.

The obvious one would be her non stop panicking whilst on holiday with Karl. Geez, I know his most famous role was that creep Christian Shephard but he seems like such a nice man here and to be honest, Nora, your kids are all adults and capable of taking care of themselves. The fact that not one of them called you should’ve been an indicator that they were coping reasonably fine without you.

It’s always going to be in Nora’s DNA as a character to live through her children in some ways. When she compared herself to a vampire, there was a part of me that agreed. Nora doesn’t mean to suck the life out of her children and they can be just as bad themselves but it’s not like she wasn’t ever coming back either. Take a chill pill, Nora. Oh wait, you kind of did that anyways.

Now that leads to the dream sequence of this episode and without a doubt my favourite part as well. Played completely over the top, there was a bit of a perverse reveal in what would’ve happened to the Walker kids if Nora had abandoned them earlier in their lives and it was certainly an interesting, if obvious look on things.

I could’ve easily predicted a closeted Kevin complete with dodgy moustache, a wife, twin girls and secretly shagging Scotty in the Walker kitchen in the same way I could’ve easily imagined Justin continuing on his drug induced spiral and Sarah as a cold hearted businesswoman. I guess Tommy being dead and Kitty looking like a slob and sponging off Holly were the only things that actually surprised me.

And there’s the other thing – Holly. Never have I enjoyed her in an episode as much as this one. Completely over the top, delighting in her narcissism and also complicit with the disgruntled Walker kids in plotting Nora’s demise. As nightmares go, it’s perfect for Nora and also four minutes of sheer campy fun that the episode pulls off successfully.

It’s also the very thing that had Nora coming back home to celebrate Christmas with all of her family but while she was having anxieties all over the place, the Walker kids were actually in their own world anyways – namely Kitty and Kevin’s competitive spirit to host Christmas.

What can I say both of them shouldn’t be proud of themselves. Pulling gay and widow cards aside, both of them were just a bit too overboard. Kevin’s house ended up looking like Santa’s Grotto gone bad and Kitty’s was a little too bare for its own good. As for Justin, he was a little too concerned with trying to get his leg over to be of any real help.

I was pleased to see Annie return in this episode. She’s a nice enough girl and her and Justin do seem to have an okay rapport with each other but I’m still wondering if it’s too early for Justin to be in a relationship right now. Besides two weeks ago, he was more than happy to cause havoc in Scotty’s restaurant when he was screwing two of the staff. Is he really ready for something serious again?

Elsewhere, the deal breaker between Kitty and Seth wasn’t the most shocking thing going. Of course the dean from the previous episode was going to turn out to be Seth’s mother and while the age gap between Seth/Kitty is both noticeable and will undoubtedly be talked about more, I actually do like him but like Justin though, I’m still not sure if it’s wise for Kitty to be in a big relationship right now.

Speaking of big relationships, could Saul and Jonathan actually be something to watch out for? There’s good casting with Richard Chamberlain as Jonathan and it would be nice if the writers didn’t waste either the actor or character, especially given that Jonathan is also HIV positive and may or may not be linked to how Saul contracted it. It’s definitely a storyline worth exploring.

With nearly all of the storylines having something going for them, the only one that slightly lets the side down is Sarah’s. Okay, so her going into Scrooge/Grinch mode because her kids are in Mexico and Luc is in Shanghai was understandable but it did seem like she was getting ahead of herself with firing people before she softened to Louise and that dummy. It’s nice to know that Sarah’s taking her new career seriously but she might want to be careful about treading on people’s toes while she’s at it.

They almost should’ve called this episode “Cold Goose” given that’s what everyone actually ate this year for Christmas.

Nora (re her children): “They’re probably making fun of me right now for how I cram Christmas down their throats. For two cents, I’d chuck it all in and -”
Karl: “- And what?”
Nora: “I don’t know. If I knew, maybe I’d do it.”

Keeping with “Light The Lights” from the first season, both Nora and Saul’s Jewish heritage was also celebrated this year as well. Now there’s good continuity.

Justin: “Do you have any plans?”
Annie: “If I had any plans, would I have basically invited myself to your family Christmas?”

Kevin: “Kiss me. I’m under the mistletoe.”
Sarah: “Well, look up, frosty, there ain’t no mistletoe.”

Speaking of kissing, in nightmare world, Kevin and Scotty got some of it and in reality, Scotty gave Kevin a kiss on the forehead. That’s better than anything we’ve had so far this season.

Nora (to Karl): “Nothing like a good massacre to get you into the Christmas spirit.”

Kevin: “I’m not allowed to use the gay card but you’re allowed to pull the widow card?”
Kitty: “I can’t believe you just said that.”

Okay, missed opportunity alert but wouldn’t this nightmare have been a perfect chance to have feature William, Tommy and maybe Rebecca as well?

Nora: “What is Holly doing here?”
Karl: “You didn’t expect William to remain alone did you?”
Nora: “William married Holly? This is her house? Oh God, Karl, I can’t see anymore. Please take me back to Santa Fe.”
Karl: “Nora, it’s only just begun.”

Scotty: “Kevin, your wife is in the other room.”
Kevin: “Then we can steal away to my old bedroom. I kept all my old toys. You could pin your tail on my donkey.”

Interesting that Richard Chamberlain is now appearing in this series. Remember when Kevin mentioned the actor back in “Home Front”?

Saul: “You don’t even remember sleeping with me.”
Jonathan: “No.”
Saul: “I thought I was falling for you.”
Jonathan: “Why didn’t you say anything?”

Standout music: Lots of interesting choices in this one but The Ascension’s “Carol Of The Bells” really shone by a mile for me.

Kevin (to Sarah/Kitty): “Maybe all our fears can come true, so what? Walkers aren’t Grinches, they’re Whos and when the Grinch did steal Christmas and all the trees and presents and the decorations were gone, what did the Whos do?”

Chronology: December 2011, thanks to our time jump this season.

Maybe it’s because I’m a forgiving soul or maybe it’s because I expect Christmas episodes to be cheesy, sentimental old tosh but either way, I immensely enjoyed “Cold Turkey” a lot more than other episodes this season. For pure, campy fun, this one certainly delivered.