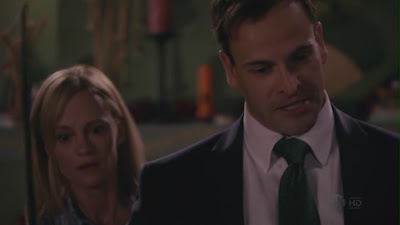 Dexter (re Lumen): “Is this the only kind of love I’ll ever find? The kind that ends in blood.”

Okay, Dexter not to channel Jordan Chase or anything but try a little positive thinking. I’m fully convinced in the next episode that Lumen is totally going to kill Jordan and all will be right with the world – I totally believe it. On a serious note, Lumen – why didn’t you wait for back up?

I knew that Emily was basically trying to lure Lumen and Dexter into a trap when she called the former and I knew that Jordan was going to react in the manner that he did. Jordan was pretty much up shit creek and he finally snapped and got his hands dirty by bumping off poor Emily in this one.

I really felt bad for Emily because in some ways, she’s arguably more tragic than Lumen was. Jordan pretty much tore her to pieces in every way possible until she was nothing and then savagely blamed her for everything going wrong. I liked that Emily tried to protect Lumen before being killed but I guess it was too little, too late for her though.

As for Lumen, I am desperate for this show to not for the second year in a row kill off a woman that Dexter loves, so for the most part while Lumen is in Jordan’s captivity, I am going to go out on a limb and assume that she will survive the finale. Surely the writers couldn’t be that cruel to either Dexter or the viewers by killing Lumen off, right?

We saw them being pretty tactile with each other, Lumen more or less invited herself to Harrison’s birthday which Dexter seemed pleased about and there was also the knife at the flea market. Now some women would prefer diamonds but apparently a swish knife is the key to Lumen’s heart. Dexter, you old romantic.

Of course Jordan wasn’t the only obstacle to Dexter and Lumen this week but he was definitely the better one. Less interesting was Liddy upping his game this week. For me, Liddy hasn’t worked that well as a character so when he kidnapped Dexter, I was pretty irritated rather than fearful for the latter’s life.

I knew Liddy stood no actual chance of getting a confession out of Dexter and I sure as hell wasn’t all that heartbroken when Dexter killed him in self-defence. I know Liddy could be seen as innocent compared to the usual creeps that Dexter manages to do in but given that he was little more than a glory seeking snake who morally did not give a damn about Dexter and Lumen’s nightly activities, I just couldn’t feel bad about him dying.

I’m not trying to make light out of the situation but Dexter didn’t deliberately kill the guy – Liddy attacked first and Dexter defended him as best he could, whilst restrained as well. Unfortunately for Quinn though, I have a feeling that Liddy’s death is going to have more consequences for him than it will for Dexter – at least for the time being.

Speaking of Quinn, it is amazing what the last three seasons have done for him. I’ve gone from disliking him a bit to disliking him a lot to actually feeling bad for him. When he told Deb how and why he actually loved her, I genuinely believed he was telling her the truth and I think she more or less realised that he was as well, despite her anger at his betrayal.

Deb really had some wonderful moments in this episode. Her scenes with Quinn aside, I loved the little conversation that she had with Dexter about her vigilante/accomplice theory, mainly for the muted reaction from Dexter. Deb’s not wrong to want honest relationships and it’s nice that Dexter more or less admitted to Lumen that he does feel bad about constantly having to lie to his sister in his own way.

More importantly, I loved how unfazed Deb was by Jordan as well in this one. Jordan tried his best to undermine her with his self-help rubbish and Deb didn’t fall for it at all and once she found out he was Eugene Greer, it was great to see her piece everything as well as she pursued a court order to prevent Jordan from leaving the country.

Maria also came up trumps this week as well by getting the court for Deb as well. I’m glad that despite Maria’s constant attempts of justifying her actions through politics that she was able to come through for Deb. Maybe they can salvage their friendship after all.

Also in “Hop A Freighter”

Was Sonya acting a little weird during her phone conversations with Dexter? Maybe I’m just reading too much into it.

Dexter: “I’m not gonna use you as bait, it’s too dangerous.”
Lumen: “You know I can do this.”
Dexter: “Yeah, I saw you kill Alex Tilden but we have to be careful. Jordan has more than our eyes on him.”

Dexter and Lumen plotting out a strategy with Harrison’s toys was actually funnier than the cats that farts and bumps on Quinn’s computer for some reason.

Deb: “We’re all waiting for you.”
Dexter: “This doesn’t sound good.”

Deb (to Quinn, re Jordan): “He was probably a really good liar. Men have that ability sometimes. It was his fault, not hers.”

We learned that Jordan/Eugene was from Tallahassee originally and that he had a single mother. Shades of Dexter?

Lumen: “You said that you didn’t want me to leave. Does that mean you want me to stay?”
Dexter: “I do.”

No Harry in this episode but the trailer for next week shows that he’s due to appear finale wise yet again.

Quinn (to Deb): “I do dumb things. I’m a dumb guy. The one thing I did right was to get you to almost like me because I really love you.”

Lumen (re Dexter): “Maybe you should let me call him.”
Jordan: “Yes brilliant because you certainly won’t tip him off in any way.”

Chronology: None specified since the events of “In The Beginning”.

What a ticking time bomb has been set off here? “Hop A Freighter” certainly has done wonders for the anticipation of the next episode but if Lumen actually dies, I will be one pissed off viewer.