My Review of Doctor Who's: "Space" 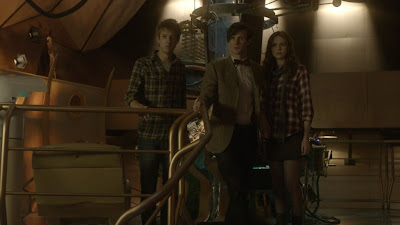 Rory: “Did you ever see Amy drive, Doctor?”
The Doctor: “No!”
Rory: “Neither did her driving examiner.”

Okay and for Comic Relief this year, we get not one but two little scenes with the Doctor, Amy and Rory and unlike the NTA sketch from January, this was a lot of fun to be honest.

The idea of two Amy Ponds might not appeal to everyone but given that this sketch also basically gave us a TARDIS inside a TARDIS, I’m willing to let it slide. The gang are trapped in a space loop and the second Amy appearing served as a decent cliffhanger as well.

So, what else happened in the first four minutes of this? Oh yeah, multiple jokes about driving, Amy’s skirt and the Doctor being a little skittish around the fiery red head. I get that some people might not have found them overly funny but I have to admit that I was giggling. Maybe the jokes were a little more innuendo than usual but some people accusing Moffat of sexism need to lighten up a little.

- Amy’s last line in this one was the same as her first line in The Big Bang.
- Loved Rory with the goggles and helping the Doctor to fly the TARDIS. It’s nice that they’re getting closer.
- TARDIS in a TARDIS – shades of The Time Monster and Logopolis anyone?
- The last time the show did something for Comic Relief was 12 years ago with Moffat’s The Curse Of Fatal Death.

An interesting start to a very fun tale. “Space” was a lot of fun and now it’s “Time” that I went and reviewed the second part. See what I did there?