So, it's been rumoured that cult show, Xena: Warrior Princess could possibly be revived and given the likes of Netflix and Kickstarter reviving the likes of Arrested Development and Veronica Mars (as well as those rumours about Heroes), surely it should become a possibility? 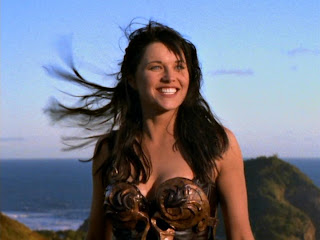 It's hard to deny that as a series, without Xena: Warrior Princess, shows such as Buffy The Vampire Slayer and Alias to name a few might have made the same impact that they had done. The show, a spin-off from Hercules and starring Lucy Lawless as the fearless warrior ran for six seasons from 1995-2001 and became a cult classic with Lawless's career instead seeing the actress cropping up in shows such as The X Files, Battlestar Galactica and Spartacus to name a few. Back in 2010, the actress expressed a desire to reprise her most famous of roles in a movie and while there is still a certain degree of red tape, there's a part of me that wouldn't mind seeing one more adventure with Xena. I can't imagine I'm in a minority there. 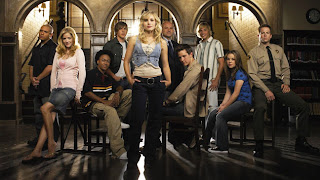 Besides if a show like Veronica Mars - equally as brilliant but shorter lived and not anywhere as huge as Xena: Warrior Princess can get a movie from a Kickstarter campaign, it does make things all the more possible. I like the fact that Kristin Bell's infamous character will be coming back pretty soon for one more adventure and hopefully in one that was better than the character's last appearance. Of course, Veronica Mars only ended six years ago whereas Xena: Warrior Princess has been off the air for over a decade now and while reviving a favourite series might sound good on paper, there's also having the right story to justify bringing it back as well. 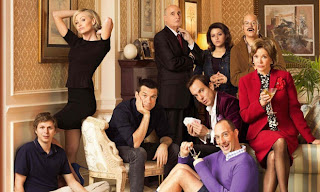 Take the newly released fourth season of Arrested Development on Netflix for example. While I have yet to reintroduce myself to the chaotic Bluths, the last few days on Twitter has informed me that their fourth run of 15 episodes (with some guests like Ben Stiller) have been a bit of a mixed bag. Some viewers have felt the new format hasn't helped the series while others have felt the show has been as good as when it originally aired on FOX. When I get the time, I will definitely make the effort to find out for myself. On the plus side, all of the original cast have reprised their roles in the cult comedy and that certainly puts the upcoming series in my good books. I guess the other thing you need in order to revive a series is the original cast. Both Arrested Development and Veronica Mars have/are in the process of doing that, so along with Xena herself, we'd also need Renee O'Connor back as Gabrielle if we're going to get one more adventure with the warrior princess, aren't we?

Of course, I should also point out that just because systems such as Netflix and Kickstarter might give some of us the option to have certain shows brought back temporarily, it doesn't mean that every single show no longer with us justifies a brief resurrection. Some shows just might be better off left where they were.

Every season of Xena: Warrior Princess, Arrested Development and Veronica Mars are avilable on DVD. Except for the one that's airing on Netflix, concerning the middle show there.
Posted by shawnlunn2002 at 5:37 AM

"It's hard to deny that as a series that without Xena: Warrior Princess, shows such as Buffy The Vampire Slayer and Alias to name a few might have made the same impact that they had done."

I think you meant "It's hard to deny that, as a series, without Xena: Warrior Princess, shows such as Buffy The Vampire Slayer and Alias, to name a few, might not have made the same impact that they had done."

Yeah, just corrected it there. You didn't actually comment on the article though. Whether you agreed with it or not.

Oh, sure do. When I don't say anything about the subject matter it usually implies agreement or interest.