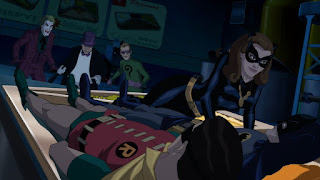 It's been 50 years this year since Batman 66 had made it's campy debut and what better way than to bring back the cast members still alive for an animated movie that captures the spirit of the beloved series? With this movie, you've got that and more.

Batman (Adam West) and Robin (Burt Ward) are back to take on Catwoman (Julie Newmar), the Joker (Jeff Bergman), the Penguin (William Salyers) and the Riddler (Wally Wingert) as the foursome team up once again but it seems that all is not what it seems this time.

Sure, the fickle foursome invade a live show and are able later to trick Batman and Robin into an elaborate trap at a TV dinner food factory but things take something of an interesting turn once Catwoman tries to use her Batnip on an unsuspecting Batman upon the latter somewhat apprehending three out of the four on a rocket ship in space (yup, that actually happened here).

Going all a bit Superman III on us, Catwoman's Batnip worked a little too well as Batman and Bruce became affected big time in this animated movie. First there was him kicking out Alfred and Robin and upsetting Aunt Harriet but then we saw Batman having both Commissioner Gordon and Chief O'Hara fired from their jobs before running the whole of Gotham with a slew of Batmen, courtesy of a fault duplicate gun.

Seeing Batman delve into his bad sign was a little shocking as this iteration of the character has always been so squeaky clean compared to every other version but there was something rather fun about this character's bad side as well, especially when he admitted to wanting attention during a live show too. Not only that, but it led to a rather inspired alliance between Catwoman and Robin as well.

Seeing those two characters try and band together to save Batman was a lot of fun and their scheme for releasing nearly every criminal from prison meant we got some delightful cameos to boot. Of course, it was Alfred who was the one to truly get Batman back to his normal self and the real plot with the Joker, Riddler and Penguin going for priceless artifacts came at nearly the last minute of things. In the end, three of them got arrested while Catwoman escaped and Harriet got to celebrate her birthday.

- The new mix for the classic theme was a nice touch along with the addition of new words for the fights and Robin getting his fair share of 'Holy' moments.
- Along with Julie Newmar's Catwoman we also got a brief glimpse of Lee Merriweather and Eartha Kitt's versions too. I loved that. Actually this whole movie was great for Bat/Cat shippers.
- The other villain cameos included Mr. Freeze, The Mad Hatter, False-Face, King Tut, Bookworm, The Archer, The Minstrel, Ma Parker, Egghead, Shame, The Sandman, The Siren, Clock King and Louie the Lilac.
- There's going to be a sequel featuring William Shatner as Two Face.

Return Of The Caped Crusaders was an absolute blast of a movie to watch. While a little longer than needed, it certainly captured everything I loved about the series with West, Ward, Newmar and everyone else on fine form. The animation was pretty nice too and the overall camp factor only added to things.