My Review of Empire's 3x08: "The Unkindest Cut" 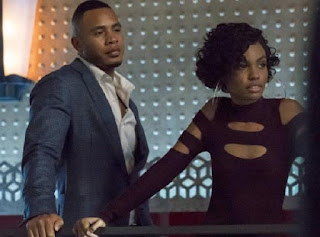 Cookie (to Andre): "You're changing in some way that I'm not sure I've got a handle on."

And Cookie would be right about that one. Andre has been changing this season and it's now that other people are picking up on it. Cookie made the point of telling him that she can't get a handle on Andre's new self and I'm not sure I can either.

On one hand, I am loving the devious new team up between Andre and Nessa, but unlike with Rhonda, it seems like Andre is going further and further into shady activity than he has done in the past. Even in this episode alone a little girl's hair ended up being cut because her racist society mother (Gina Gershon) posing a problem in this episode.

The society person in question had an event that Empire were collaborating on her with and it was an opportunity for Nessa to completely sabotage Tiana and she did so with aplomb. Tiana went on one hell of a damning (if accurate) rant, which ended up being viral and ruining her chances to perform at the event. Tiana talked about how the situation made her into a diva but at least the episode gave her a bit of fire for once too.

It also seemed to see Hakeem soften a little towards Tiana as well as he managed to clock onto the fact that Nessa and Andre had sabotaged Tiana. This episode was probably one of Hakeem's less annoying one but I still found myself siding with Andre during their fight for some reason.

As for Jamal, Philip got him to try another method of confronting his fears. A little bit of virtual reality seemed to be doing the trick until Lucious had to ruin it. On the plus side, it did result in a lovingly biting song from Jamal, which Lucious then deflated by having Cookie confess her role in the whole Freda thing along with the family threatening to turn on Lucious again.

On the plus side for Lucious, it seemed that both him and Leah managed to work together in order to find Tariq's weakness (actually didn't see that coming) and have a bit of fun with it. It's an interesting plot and Leah's reaction to seeing Lucious and Anika almost shag on the table also cracked me up as well. This was also a rather good episode for Anika to be honest.

- No Becky, Shyne, or Derek this week.
- Gina Gershon had one of the worst looks in this episode, which seemed fitting for her horrible character.
- Next episode is the mid-season finale.
- Standout music: This episode had plenty but let's focus on the brilliance of Jamal's Cold, Cold Man, Nessa's Black Girl Magic and Rae Sremmurd's Black Beatles.