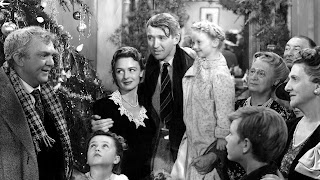 Clarence: "You see, George, you've really had a wonderful life. Don't you see what a mistake it would be to throw it away?"

Slight confession: I've only ever seen bits of this movie on various Christmases so a couple of weeks ago, I bought the DVD, so I could properly appreciate this movie. It's a timeless Christmas classic that's been referenced so many times since it's release seventy years and I can see why.

Our protagonist is a man named George Bailey (James Stewart) whose spent most of his time helping others but on one particular Christmas considers killing himself, only for an angel named Clarence (Henry Travers) to step in and show George what his life would be had he not been born in the town of Bedford Falls.

It's an interesting cautionary tale as George sees the impact of his own existence on other people and the scenes between him and Clarence (as well as Clarence and the other angels) are rather startling. George is the type of every man to really drive home the appreciation of having loved ones and the emphasis on a life well lived.

In the movie itself, George's selflessness is highlighted throughout flashbacks as a young boy and young man as well as through his family with wife Mary (Donna Reed) and children, including a little girl named Zuzu. Seeing George fall apart prior to Clarence's intervention works a treat as does the world where he doesn't exist in the first place.

Now I'm not going to pretend this is my favourite Christmas movie of all time but having finally seen it in full, I can see why it resonates so much with people. Out of all the characters, George and Clarence are the most formed with everyone else more or less there as part of the former's development throughout the movie but they do work as supporting players, including the tetchy antagonist Mr Potter (Lionel Barrymore).

- Frank Capra has said this was one of his favourite films that he made.
- Despite being a classic, the movie was considered a flop upon it's initial release.
- Apparently this was the only film in history to originate from a greeting card.
- Chronology: This movie takes in from 1919 to 1945.

It might have taken me a while to properly have watched It's A Wonderful Life but as I've said in this review, I can see why it's a classic. It's gorgeously shot with some universal themes and a wonderful central performance from James Stewart.

Labels: It's A Wonderful Life