My Review of K9 And Company's: "A Girl's Best Friend" 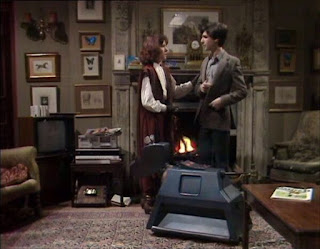 K9: "We wish you a Merry Christmas and a Happy New Year."

Before the days of Torchwood, The Sarah Jane Adventures, K9 and Class, there was another hope for a spin-off in the Doctor Who universe. It was the year 1981 and Tom Baker had departed in Logopolis earlier in the year and Peter Davison was waiting in the wings.

The BBC and John Nathan Turner tried their hand at a spin-off by having two of the most popular companions working together - Sarah Jane Smith (Elisabeth Sladen) and K9 (John Leeson), along with a young male companion type in Aunt Lavinia's ward Brendan Richards (Ian Sears). This opening episode gave us a preview of what that partnership would be like. Sadly it was the only time onscreen we would see that.

From the hysterical opening sequence to the final moment where our titular robotic dog would sing 'Merry Christmas' down the phone, this was certainly a series that would've had a lot of fun with itself had it come to fruition. The central plot in the pilot episode alone centred on a Hecate cult with a penchant for human sacrifices and initiations.

For these plots, this was where both Brendan and the reluctant Peter (Sean Chapman) were both being primed. The latter seemed to be suckered into the dark cult by his overbearing father and expressed his reservations about the thing while Brendan was kidnapped and nearly sacrificed by the cult until K9 and Sarah Jane were able to save the day.

Unlike Doctor Who with most of it's festive outings, while K9 And Company's pilot episode is set during the Christmas season and even ends with Sarah Jane talking about having her dinner, there's not much festive cheer. The witchcraft theme itself is hardly the most festive but it works a treat and had this show gotten an actual series, it might not have been a one time only thing either.

Sarah Jane is pretty much on top form in this 50 minute pilot episode while K9 is also just brilliant to watch as well, especially with his defeat of Hecate's members. Brendan's a bit of a mixed bag and not entirely dissimilar to Adric if I'm being perfect honest but he does nothing that's really annoying throughout though. As for Lavinia, I kind of wish she had been more involved but her brief scenes were great to watch though.

- Some nice references to a certain someone but did it really take Sarah Jane this long to actually go to Lavinia's and collect K9?
- Ian Levine was responsible for the theme music. The title for this are something else altogether.
- This story had the working titles of Sarah and K9 and One Girl and Her Dog. I think the title they went with was fine.
- Chronology: Christmas 1981, am I right?

Pilot episode wise, K9 And Company makes a decent stab of it with A Girl's Best Friend. Considering that it pulled in over 8 million viewers, it did seem odd that a series wasn't commissioned. Who knows what other gems we might have gotten had we seen more of Sarah Jane, K9 and Brendan working together.