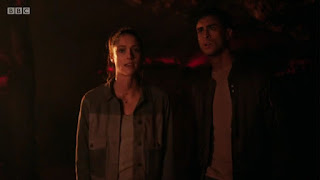 And here's the conclusion to this two part adventure. Is it me or was that a little too simplistic a temporary defeat for the Shadow Kin? I know this show is influenced by Buffy the Vampire Slayer (something we're reminded of once per episode) but April's scimitar wielding skills seemed to be on a par with older Amy's from The Girl Who Waited? Basically this lot gave up their King a little too easily and allowed April to use them to solve the other alien menace of the week.

I did like the scenes with April and Ram on the Underneath world, which was decently shot for a planet/quarry. I also liked the frank discussion both of them had about knowing the other for a month and even the inclusion of Varun and Huw during the latter half of the episode had it's moments too. As for the scenes with Jackie regaining her mobility, that was a bit of a dicey one for me. The intention behind it seemed well meaning but a little misguided as well.

Of course, April would've been better having the Shadow King annihilated and it's pretty obvious that her leniency will backfire on her in the series finale. Of course, April wasn't the only one having to juggle their morality in this one.

Charlie found his hand being forced by both Quill and Ames (both of whom were working with and against each other at different points here) into using the Cabinet of Souls and both very nearly got what they wanted here had it not been for April's last minute plan with the Shadow Kin. I did find myself more on Quill's side at times than I did Charlie's, which I'm not sure I was supposed to. As for Matteusz, he was mostly the voice of reason between three very morally skewered aliens here.

Keeping with Ames, the show certainly seems to be having fun with her ambiguity. She had no problem pointing a gun at Matteusz in order to get Charlie to play along with her demands but also had some fun in playing Charlie and Quill off each other. We did learn that the Governors aren't strictly bad though and she seems sincere in her promise to help Quill regain her freedom though.

- Tanya was also the voice of reason in this episode by getting through to April and Ram's parents. I liked that about her.
- Even though April has somewhat become their ruler, the Shadow Kin refer to her as a King though.
- Come to think of, the Cabinet seems to have a slightly similar design that the Moment has, doesn't it?
- Chronology: A month since the events of For Tonight We Might Die.

Brave-ish Heart was a decent conclusion to this two-parter. I do think the Shadow Kin were temporarily defeated a little too easily but again, there were some nice enough character moments throughout the episode, so point there and I liked the killer petals.