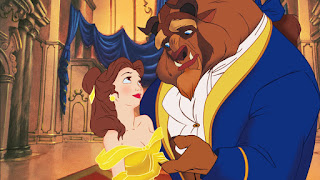 Seeing as it's due a live action release in 2017 that I'm looking forward to actually seeing, I thought it was time to give the animated version from 1991 another view. It's been a long while since I've last seen this version of the classic fairytale and the opening scene alone was a stark reminder as to why it's one of the best Disney movies ever made.

The movie starts with a vain prince (Robby Benson) turning away an ugly beggar woman. The woman then reveals herself to be a beautiful enchantress who then turns curses the prince into a beastly creature while also transforming both his castle and staff for good measure. The Beast now has to learn to love someone for more than their looks and they in return have to love him back before the last petal of an enchanted rose falls.

This is where a young, slightly odd village girl named Belle (Paige O'Hara) factors into things. More interested in books than marrying the brutish Gaston (Richard White), Belle finds herself trading her own freedom for her foolhardy father, Maurice (Rex Everhart) when the latter overstays his welcome at the Beast's gothic looking castle.

Needless to say, both Belle and the Beast initially clash and with his inability to control his temper and her snooping into the West Wing, it certainly wasn't getting off to a great start with the pair of them. Of course Belle nearly getting mauled by a pack of wolves and the Beast showing a little softness did however seem to smooth things between the pair.

Then there was the ultimate romantic moment as the Beast's staff - candled Lumiere (Jerry Orbach), clock Cogsworth (David Osgden Stiers), tea pot Mrs Potts (Angela Lansbury), her son the tea cup Chip (Bradley Pierce), the foot stool that clearly was a dog and a wardrobe to name a few arranged for both Belle and the Beast to get closer, only for the latter to return home to her ailing father and the monstrous Gaston along with bumbling Lefou (Jesse Corti) to use the opportunity to mount an army after the Beast.

Gaston is one of the best Disney baddies and probably one of the most realistic too. He's an angry, brutish lout, equally as vain as the Beast had been prior to his transformation, only without any redeeming features. His downfall at the end of the movie, coinciding with the Beast's curse finally being lifted is a thing of beauty though.

The relationship between Beast and Belle is definitely open for a lot of debate but it's still a compelling one and clearly one that has influenced a lot of modern romances (and two less than stellar book and movie franchises). It's hard not to fall in love with both of them as their connection comes through beautifully throughout the movie.

- Aside from a sequel, Belle also makes a blink and you'll miss it cameo appearance in The Hunchback Of Notre Dame.
- Belle is an only child in this movie where she's usually the youngest of three girls in the source material.
- This movie was the last one to feature music from Howard Ashman. There's a dedication to him as well.
- The music highlights - Beauty And The Beast (Angela Lansbury and Celine Dion and Peabo Bryson), Gaston's Song, Be Our Guest and Little Town. The score music in this movie is gorgeous though.

I could gush and gush about this movie and I will. The animation is beautiful, the music incredible, the love story between Belle and the Beast is genuinely effective and it's just a gorgeous movie from start to finish. Beauty And The Beast is easily one of the best movies of all time and definitely one of Disney's best to date.

Labels: Beauty And The Beast

Which book franchise/s were you thinking of?

Weirdly enough, I was thinking the likes of Twilight and 50 Shades, the latter especially.