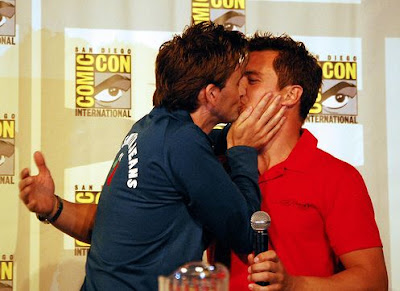 Great, now the reasons for wishing I was at Comic-Con are now increasing. Yes, people your eyes are not playing tricks on you. That is David Tennant making out with a rather pleased John Barrowman (seriously who wouldn't be?) at the event.

Yesterday lucky viewers got to see both Children Of Earth: Day Five and Planet Of The Dead after both actors gave slashers a field day. I can only imagine what kinds of crazy fanfiction some viewers will write after this.

Now I REALLY wish I had been there.

ETA: No Movie. I called it but we did get some other goodies.

Digital Spy write up of the event .... http://www.digitalspy.co.uk/tv/a167392/live-doctor-who-panel-at-comic-con.html

Trailer for The Waters Of Mars .... http://www.youtube.com/watch?v=2wA5J-RkVn0

So that trailer. I was having reservations about The Waters Of Mars but now I’m ecstatic for it. The Doctor’s impending death has been hinted for a while now and the moment in the trailer where he defiantly told Adelaide that he wasn’t going to die because he didn’t hear knocking, well it rang a little similar to Donna’s ‘I don’t die’ speech to Rose in Turn Left. Adelaide even gave The Doctor an ‘I’m sorry’ look before the four times a knocking a came. The Doctor looked very, very scared.

By the way, the BBC have definitely confirmed the return of John Simm as The Master (both blond and in a hoodie) and there was another trailer at Comic Con that had various images of him, The Doctor, Donna, Wilfred, Sylvia, Joshua Naismith, Ood Sigma and some snake faced creature as well, while this trailer is voiced by Timothy Dalton to boot who also mentioned people on Earth having bad dreams (RTD did mention something about nightmare sequences in the finale). Some people are saying that 4.18 is being called The End Of Time but I’d rather an official announcement before taking the title as serious.

Here's the trailer for the finale (apologies for quality) ... http://www.youtube.com/watch?v=xMEY43MlcRs

I know there so many things on TV but these last three specials are like the most exciting of the bunch for me as a viewer. I really can’t wait to see how Tenth Doctor is going to exit the series. I expect massive tears.