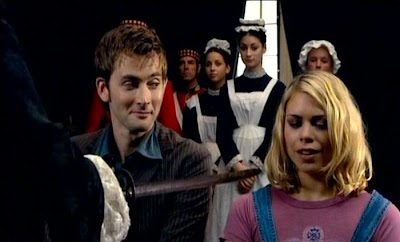 If there’s nothing more I love than vampires, then its werewolves. You don’t have to worry; I’m not talking about some weird fetish, just merely a pop culture I enjoy seeing on TV and movies (with the exception of Underworld). So isn’t it great that episode two of the new season features a werewolf then? I would mostly say yes as while this episode had some brilliant moments, it wasn’t entire perfection either.

This week, The Doctor and Rose decide to go on a fun, no danger filled trip, only to find themselves transported to the Scottish Highlands in 1879 and stopped by a coach holding one Queen Victoria, who is on the way to dine with old friend Sir Robert and his family, unaware of the dangers that wait them but seeing as The Doctor and his psychic paper tell Victoria that he’s her protector, she should be in safe hands, shouldn’t she?

Well there is a case of some nefarious Monk Ninjas who open the episode by taking over Sir Robert’s estate in a scene complete with Matrix style fight sequences and locking most of the staff and Robert’s wife, Lady Isobel in the basement along with a menacing lad in a cage who happens to be a werewolf. It doesn’t take long for Rose (who is trying to cover herself after her “nudity” incident with the Queen) to get captured and locked up with the enslaved staff and The Host.

Played by Tom Smith, the werewolf or host, depending on your stance is something of a menacing but perceptive presence as he scares everyone but Rose into submission and plays on Miss Tyler’s plucky curiosity and attempts to get him help. He’s also got one hell of an ambitious master-plan too – to infect Queen Victoria and create a nation of his kind and his efforts to meet his goals are impressive. This is after all, a guy on one interesting mission to preserve his species.

With Ninja Monks led by Father Angelo ensuring that everyone is barricaded inside the estate, Rose’s capture by them and her sort of rescue by The Doctor happens so fast, I’m kind of surprised that even The Doctor actually registered that she was missing in the first place. He was after all overeager to chat with Victoria before noting something suspicious about his environment.

Which as a viewer wasn’t hard to spot as Sir Robert acted a little too obviously cagey for his own good and despite the threat of death to his beloved wife by Angelo; he almost wasted no time in confessing to everyone that a trap had been set for the Queen. I don’t think The Doctor even confronted him before he started spilling the beans as even the history about Robert’s astrologist father and the werewolf folk tales confirmed things for the Time Lord a little too quickly.

Also we had Father Angelo advance those Ninjas pretty darn quickly to attack and confine everyone as our host/werewolf started gunning for the Queen. It’s a pity for Angelo that he wasn’t smart enough to avoid getting shot by Victoria herself after all his careful planning to trap her.

Another classic British iconic figure, Pauline Collins delivered something of a hit and miss performance as the infamous Monarch in question. At the start of and most definitely at the end of the episode, there was something rather pantomime about Collins, it felt like she was parodying Miranda Richardson as Queenie from the Blackadder series.

I’m not being derogatory here as in the middle of the werewolf attack and prior to it, we got a nice and cryptic moment where Victoria was talking about the death of her husband and there was something so foreshadowing to future events when she revealed her thoughts about the essence of ghost stories that we actually get a little pay off of sorts to it in the end.

As for the wolf himself, despite his quest (and okayish CGI from the props department for him), we are once again presented with the notion of victim within the villain as we learn about the host being a young boy who was made the way he was because of a corrupt Brethren (has to be those Ninja Monks).How many of the bad guys can we feel sorry for, Russell?

Even after he slaughtered both Reynolds and Robert, both of whom had no problem in sacrificing themselves for their Monarch (although I was a little surprised that both of them got killed off. I at least thought that Robert would survive) and got close enough to Victoria, he then does nothing and encourages The Doctor to put him out of his misery, when we get a connection between Robert’s dad and Prince Albert as an oversized telescope like weapon and an invaluable gem ends up toasting this werewolf to kingdom come.

It’s a cool enough ending for a pretty interesting but not exactly overly complex guest baddie this week. I found the malicious Father Angelo far more effective and to be honest a little more scary too.

However as for Queen Victoria, the debate of liking or detesting her was a little intense (her being a werewolf is not because I believe she is). I liked the self awareness of her to carry a weapon after so many attempts on her life (six to be exact). I liked how she didn’t lose it when she learned that Robert was forced to betray her and I quite liked most of her scenes with The Doctor and Rose. Those were a lot of good things to like about someone who’s been dead for over a hundred years, right?

I even liked how she knighted both The Doctor and Rose as a result for their bravery and wit during the latest attempt on her life but I did find it hilarious that then she would then banish them from her kingdom and the lack of a protest from either member of our TARDIS team. You think one of them would have at least really objected this or tried to question why she decided to deal with them like this.

Still though being banished and accused of blasphemy at least had one advantage for Rose as the Queen finally gave in and uttered her catchphrase about not being amused. Rose spent a good portion of the episode trying to get Victoria to say that and once she did, Rose behaved like anyone else would when they win a bet, no matter how minor it is – she totally revelled in it. Yeah, very mature Rose but funny.

While Victoria may have been happy to throw various accusations around the place, she wasted absolutely no time in setting up an institution called “Torchwood” to investigate otherworldly activities along with issuing a warning about how to deal with The Doctor should he interfere. Talk about sheer hypocrisy but I welcome any reference about the forthcoming spin off with Captain Jack and this final scene was ultimately my favourite part of the episode.

Also in “Tooth And Claw”

This is the second episode in a row not to feature a “Previously On” bit, though Russell really didn’t reference anything that happened in last week’s opener either.

Original Destination: 1979 at an Ian Dury concert. This is the second time in this series that TARDIS mistook a journey and second time we met a historical figure as a result. The first being in “The Unquiet Dead” of course.

Queen Victoria (to Captain Reynolds): “I shall contain my wit in case of doing you further damage.”

We got a sly reference to a former assistant when The Doctor aliased himself as Jamie McCrimmon and Rose got called a “timorous beastie” by Victoria. Plus we had the Sir Doctor of TARDIS and Dame Rose of the Power Estate knighting.

The Host (to Rose): “You bark like the sun but all I require is the moon.”

Rose: “Where the hell have you been?”
The Doctor (re werewolf): “That’s beautiful.”

Fashion wise this week, you gotta love a bespectacled Doctor and a rather 80’s dressed Rose. It was fun that Rose didn’t conform to this period for once.

The Doctor (to Robert/Queen Victoria/Rose): “You want weapons? We’re in a library. Books are the best weapons in the world.”

Was it me or did we get a lot of liberal overtones in this episode? The Doctor openly disapproved of Margaret Thatcher and him and Rose mocked the Royal Family at the end of the episode. I wonder how “complaints” will ofcom receive after this episode aired?

Rose (re the gem): “My Mum would fight that wolf with her bare hands for that thing.”
The Doctor: “She’d win.”

Queen Victoria: “You may also think on this that I am not amused.”
Rose: “Yes.”

Standout Music: “Hit Me With Your Rhythm Stick” by Ian Dury and the Blockheads and I’ve noticed that there seems to be a new mix on the end credits towards the end funnily enough.

“Tooth And Claw” was certainly an episode that didn’t lack bite and just like last year, a reference to forthcoming events seems to be thrown our way at every opportunity. David Tennant wasn’t as good as he was last week but he certainly is making the role quite his own. Though I have to be honest and admit that the pacing could’ve been a little better but this was still a decent episode.