My Review of Doctor Who's 2x04: "The Girl In The Fireplace" 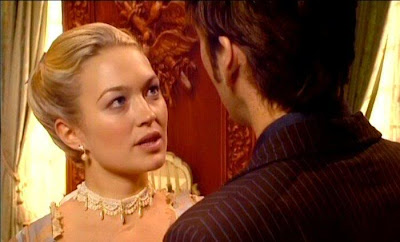 After this episode, I’m certainly going to be a little more wary of the clocks I have at home thanks to the baddies in tonight’s instalment. This wasn’t a mind bender of an hour but a time bender.

Let’s say that Mickey’s first adventure as a fully fledged companion instead of a hindrance with The Doctor and Rose is one that he won’t be forgetting any time soon when the TARDIS lands onto a 51st Century ship that not only has human parts running its operation but it also acts as a gate throughout various time periods of a young girl named Reinette, who in turn is shown to be quite extraordinary in more ways than one.

Not only is Reinette the girl who grows up to become King Louis XIV’s mistress Madame Du Pompadour but on top of that, she’s also being pursued by a bunch of Clockwork killer robots who literally need her brain for their ship as well as having quite the connection to The Doctor too.

Played by David Tennant’s real life girlfriend, Sophia Myles is actually quite adept of playing quite the regal role that it’s almost hard to believe she’s the same actress who took part in that dire vampire/werewolf film Underworld three years ago. Her performance in this episode is great and personal factors aside, her and Tennant’s Doctor spark off each other remarkably well.

I was a little surprised that the young girl The Doctor had saved from a lone Clockwork Killer at the beginning of the episode would grow up to be an influential historical figure but Madame Du Pompadour’s reaction to seeing The Doctor after so many years by kissing him, had our Doctor acting really laddish. “I just snogged with King Louis’ mistress” is something worth bragging about compared to another famous other woman in Monarch history I suppose. Although rather than this remaining entirely juvenile, there was a level of seriousness between The Doctor and Reinette that was greatly addressed.

Not only did he save her both as a child and as an adult from the Clockwork Killers but there was also an intense attraction between them. He even kind of stalked her while she was chatting to Katherine in the garden at one point as well as discovering more about why she was wanted by the Clockwork Killers when she allowed him to read her mind. Little did he realise that it works both ways but more on that later though.

It seems the Clockwork Killers need her brain for the ship but can only use it when she hits the 37 mark of her life and it doesn’t take them long to eventually track her during that particular time period in her life. Rose really did appear genuine when she was expressing empathy to Reinette and explaining things in lieu of The Doctor but it wasn’t until Reinette actually managed to get onto the ship and overhear her future self call for The Doctor that she really took note of the situation and then our clockwork foes finally got her and King Louis.

As killers went, this Clockwork was certainly impressive, if not exactly the world’s best for conversation and although Madame Du Pompadour refused to give in and fear them, they managed to still be effective. Not only that, they also weren’t that easily defeated (pity a show like Charmed never took note of that concept, even with their most mundane of demons).

It seems that The Doctor freezing them with fire extinguishers (twice) and even throwing anti-oil (the latter during a scene where a snatched Rose and Mickey were nearly done for it and The Doctor pretended to be drunk – at least I think so) at them slows them down but like them being able to take commands from Madame Du Pompadour, it does nothing to stop them from the task at hand.

In fact, it isn’t until The Doctor gatecrashes Reinette nearly losing her head while on horseback and effectively telling the Clockwork killers that they weren’t going to succeed in using the infamous mistress’ brain that they actually stopped, surrendered, wound down and more or less just died as a result. And that’s ignoring the writer’s obvious puns about winding up and clocks throughout.

Still though we got a briefly nasty twist where The Doctor’s heroics also cost him the time vortexes between 18th Century France and the 51st Century space ship, resulting in them closing.

This momentarily left Rose with the prospects of no Doctor, a broken down police box and a complaining boyfriend, so it wasn’t hard to feel for her once again. Although The Doctor appeared sad, he didn’t seem overly broken hearted about keeping company with Madame Du Pompadour (or was that just David Tennant happy to be working with his girlfriend?), until the courtesan showed him the original fireplace he had first used to encounter her and managed to return to Rose and Mickey.

The episode then takes a more dour turn with The Doctor brooding over missing an opportunity to properly say goodbye to Reinette (though he is given a letter, where she once again draws a common link to him and her). She got to him by being able to read into his own pain and even Mickey had a great turn by getting Rose to lay off the questions. Though in fairness, Rose was once again excellent and sensitive to The Doctor and his feelings for Reinette.

Also in “The Girl In The Fireplace”

Exact Time Date: 1727 France. It came as no coincidence that the Clockwork Killers ship was called SS Madame Du Pompadour, although I wonder if the 51st Century part has anything to do with Captain Jack or Torchwood.

Reinette/Madame Du Pompadour: “What do monsters have nightmares about?”
The Doctor: “Me.”

Reinette/Madame Du Pompadour’s talents included being an actress, courtesan, artist and a dancer. We didn’t actually see her which was nice because Tennant captured The Doctor’s anguish over her without that kind of scene.

The Doctor: “Goodness, how you’ve grown.”
Reinette/Madame Du Pompadour: “And you do not appear to have aged a day.”

Was it me or did the horse following The Doctor seem a little similar to what we got with Kate in Lost this season? Except the horse here is white.

Mickey: “The King’s wife and the King’s mistress?”
The Doctor: “France, different planet.”

Rose: “You’re not keeping the horse.”
The Doctor: “You keep Mickey.”

Little bits: The Doctor wanted to name the horse Arthur, a snide remark was made in regards to Camilla and The Doctor talked about bananas and dancing was positively mentioned again. Those last two things are vital tips that Steven Moffat was responsible for this episode.

Rose (re The Doctor): “Look what the cat dragged in.”

Reinette/Madame Du Pompadour (to The Doctor): “Such a lonely little boy. Lonelier then and even lonelier now.”

If you add this comment and her later one – “Lonely Angel”, plus the “Lonely God” statement from “New Earth”, then it seems the writers are trying to tell us something.

Reinette/Madame Du Pompadour (re Clockwork Killers): “They are five years away.”
Rose: “For you, I haven’t got five minutes.”

It seems Rose’s 80’s hairstyle is back again as well as a bespectacled Doctor. As always, I approve.

Rose: “Are you alright?”
The Doctor: “I’m always alright.”

Standout Music: This episode was loaded with great score music. Some truly exceptional score music might I add.

Better than I expected, “The Girl In The Fireplace” is another visually stunning, historically intriguing and character filled episode, although in fairness, it’s really David Tennant who dominates proceedings. Four episodes in and this second season has certainly been relentless in giving us top quality and imaginative episodes. I really can’t wait to see if what that creativity will have in our Cyberman two-parter, which incidentally enough is next week’s instalment. This season is certainly getting interesting.