My Review of Torchwood's 2x09: "Something Borrowed" 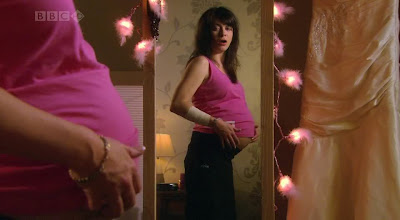 We’re finally here. After weeks of idle chat, Gwen Cooper is about to make an honest man out of Rhys Williams and of course her perfect day was going to be anything but perfect. Then again marrying Gwen brings up its own problems anyway.

First off the girl goes out on her hen night with a bunch of women we’ve never seen before. Yes Gwen really does have friends outside Torchwood (Jack, Owen, Toshiko and Ianto should follow suit) but they’re so boring and vapid that you hope this is the only episode we’re subjected to with them.

Having a couple of drinks and a tasty male stripper is great and all but this isn’t an episode of Gavin And Stacy or Pulling so the small bit of emphasis felt like a mercy to me. Of course as vacant as her friends seems to be at least one of them is clever enough t spot that Gwen seems to have a cut on her arm.

Most brides worry about their grooms getting sent to another country, Gwen on the other hand still has to work on her hen. This week we get a shape shifter called a Nostrovite who attacks Gwen when he can’t escape her. For you Gwen haters, I have to disappoint you – she survives.

On the plus side, the shape shifter manages to defecate on her wedding by getting her pregnant. The classic sci-fi story of an alien getting some unfortunate lady to play host and of course it has to be Gwen who gets to be a mama.

Waking up to see your belly in that size certainly had a sobering effect on Gwen. Even Owen worries over but when Jack suggests calling off the wedding, Gwen practically tells him to go screw himself. If you need a reason to support, then this could be.

In fairness Gwen wants to marry Rhys because she feels that she has a lot of making up to do. She’s right but much as I want her to be Rhys’ wife, she’s also growing a hell spawn that neither her or Torchwood really know anything about. Even Rhys doesn’t mind cancelling the wedding until she gives birth.

The problem with Gwen is that when she’s determined, nothing can deter her and she still decides to go through with the wedding. This also problems that Gwen is a world class dunce too. You don’t want to arouse suspicion, don’t have a wedding that will do just that. For once it wouldn’t have killed Gwen to have actually listened to Rhys but the blooming wedding goes ahead no less.

It’s interesting that up until now, we haven’t met Gwen’s family. Not that I’ve had a burning desire to either but given how much the writers make her into such the humanitarian, their appearance has felt like a long time coming.

If we’re going by Doctor Who standards, then I should loathe her mother on sight like I did with Jackie, Sylvia and Francine but Mary is kinda awesome. She’s naturally surprised to see her daughter up the duff but doesn’t act like a moralising hag over it either. I think “respect” comes to mind.

Gwen’s father is also pretty likeable and has a similar enough reaction to his daughter’s pregnancy too. It’s probably because of this that later in the episode Gwen actually explains to him the real reason why she’s about become a mother in such a short space of time.

Rhys’ parents on the other hand don’t come across as too well. Both of them seem to obviously dislike Gwen and here I actually sympathise. Barry wonders why Rhys is marrying her and we get to see Rhys defend Gwen’s honour while Brenda is the only who is actually suspicious of Gwen being pregnant.

There’s also a delightful hatred between both Mary and Brenda as well. Although we don’t need much in terms of the domestics, I enjoyed the ongoing pissing contest between these two. Naturally I side with Mary, who delivered a lot more funnier lines but it’s not like Brenda didn’t make an effort to moan about Gwen.

The interesting thing about this episode was the fact that Gwen didn’t develop an emotional bond with the alien growing inside. Writer Phil Ford could’ve gone down that route and made the alien fetus influence Gwen’s decisions but he avoided doing that.

One of the first objections Jack had with Gwen wanting to still get married seemed to be that she could be influenced by the alien. Her yelling at him definitely made me think her hormones could play but she’s mostly rational throughout the episode. Again massive points for not going there. It might sound heartless but I’m glad saw the alien thing as a problem. The chances of her actually surviving a birth didn’t seem to be very high either.

If being pregnant and having tongues wag wasn’t enough for Gwen and Rhys, then the female Nostrovite coming to the wedding to get her spawn proved to be an ultimate. On the plus side she killed one of Rhys’ idiot friends, Mervin but it did take the gang quite a while to nab.

Heck the psycho bitch managed to get Toshiko trapped with the bland Banana and even held Mary hostage outside the venue. Gwen had an ultimate moment of coolness when she calmly started shooting the Nostrovite. This episode didn’t have many cool things but that was cool, even if the bullets did little to actually stop it.

With a whole venue bearing witness to the events of an alien attack, Ianto got relegated to making sure the police didn’t interfere. The Nostrovite just kept morphing into people and there’s one particular moment that I’m sure many viewers will not love.

Remember all that crap in “Meat” and “Adam” where Gwen and Jack had those looks of lust? Well when Gwen thinks she has Jack all alone she admits to loving him. Worse still she nearly kisses him until she realises that it’s the damn shape shifter. For a woman so determined to marry Rhys, Gwen really does pick her moments.

Maybe the writers dig the Jack/Gwen thing but viewers certainly don’t. Here’s hoping this episode officially ends that nonsense but at the same thing, it doesn’t say much about Gwen and Rhys’ marriage (like they weren’t gonna make it up the aisle). She wants a relationship built on truth, yet she seems to be lying to herself.

She goes on and on about how much she loves Rhys, so why the hell is she making the moves on Jack? Even during a dance at the reception, there’s that lingering vibe between them. If Gwen is ‘settling’ for Rhys, does that mean that Jack is with Ianto because he can’t have Gwen?

I sincerely hope to God that isn’t the reason. I could live with Jack being either confused or in love with two people but I would hate the writers for relegating Ianto to the role of second best for Jack. It’s bad enough that Rhys is in that kind of position even if Gwen did marry him in the end and sided with him over Jack a good few times in the episode.

Another interesting thing is the end of this episode. So Jack had a wife and I doubt it was Estelle. When he opened that box, I almost thought it would be something on either Grey or Adam so that reveal caught me off guard. I do love learning more and more about Jack’s past. Although I’d love a relatively steamy scene between him and Ianto as well. Enough teasing writers and just deliver.

As for the female Nostrovite, well Rhys got angry enough to threaten it with a chainsaw but Jack stole his thunder by shooting it down. It is wrong that I felt more for Rhys than I did for Jack in this episode? I even loved Rhys for punching Jack, despite the latter’s comments on Brenda being so funny.

Rhys did however succeed in killing the fetus with the Singularity Scalpel so he saved Gwen from alien motherhood at least. As for the wedding vows and reception, ah they were okay. I wasn’t surprised that Jack chose to retcon all of the guests. With the exception of Gwen’s father, perhaps it wasn’t such a bad thing he did that. Still not sure why Jack thinks retcon is such a smart idea. The Doctor certainly wouldn’t do it.

As for Toshiko and Owen, both of them got to deal with lighter stuff. Owen seems to be adjusting even better to his current situation and while he’s able to accept Toshiko as his wedding date, at least he has the sense not to give her false hope. Toshiko at some point should try looking for someone who is actually interested in her as a girlfriend.

Granted Rhys’ other idiot friend Banana probably wouldn’t be a good choice. Toshiko’s handling of him throughout the episode did show off her more tougher side and she’s every bit as good as rejecting as she is getting rejected. I certainly wouldn’t want to piss her off.

One other I did love was her conversation with Gwen. Isn’t it about time the two of them actually bonded? Although I can cut myself off from people, all I have to do is watch Toshiko and I come to the realisation that I’m not quite as bad. Toshiko certainly does need to find the fun a little bit more.

Also in “Something Borrowed”

The episode began with a Gwen and Jack flashback from “Kiss Kiss, Bang Bang”. There was nothing new in the sequence.

How come we didn’t get to see Andy at the wedding? He’s Gwen friend and also not annoying. Silly writers.

Captain Jack: “You are not thinking straight.”
Gwen: “Do not bring my hormones into this Mr Harkness.”

Even with a fake pregnant belly, Eve Myles looked absolutely gorgeous in her wedding dress.

Ianto mentioned his father being a tailor when flirting with Jack. Also Gwen now knows for definite that Jack and Ianto are screwing around.

Brenda: “Maybe but I wasn’t late for my own wedding.”
Mary: “If you were, Barry might have got away.”

Captain Jack (to Brenda): “Get back you ugly bitch.”
Rhys: “Hey that’s my mother.”

Gwen was able to tell that Brenda was Brenda because of her perfume whereas Jack could’ve ended up really pissing off Rhys by doing in his mum.

Owen (to Jack, re Gwen): “That’s the kind of daughter every mother must dream of. Cool as ice, packing an automatic.”

Rhys: “Are you alright?”
Gwen: “I’m running around in my wedding dress with what feels like a crate of lager up my skirt. What do you think?”

Gwen: “You retconned our families? It’s probably for the best. I don’t want my mum to remember what happened today.”
Captain Jack: “Neither should the happy couple.”
Gwen: “No way. There will be no secrets in this marriage.”

Ianto: “That’s what I love about Torchwood. By day chasing the scum of the Earth. By night you’re the wedding fairy.”

Chronology: A few weeks after “A Day In The Death”.

Okay I will admit that “Something Borrowed” had some good moments but compared to the brilliance of the previous four episodes, this is definitely something of a comedown. The Gwen/Jack crap didn’t help matters either but at least she married Rhys and here’s hoping they do have an honest, loving marriage.