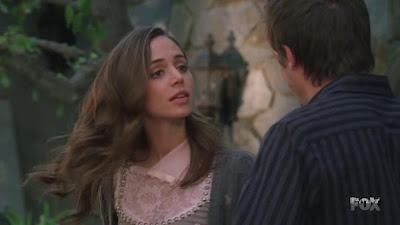 Written by Elizabeth Craft And Sarah Fain
Directed by James A. Contner

Adelle (re outbreak): “The effect is spreading. Mr Dominic is exhibiting erratic behaviour.”
Topher: “Huh? He didn’t take any. There’s no way Dominic would consciously try to have fun. It could be airborne.”

I wonder what would happen if you mixed the likes of “Band Candy”, “Tabula Rasa” and “Spin The Bottle” all together. Would you get something like this episode? If not, then I’d be very surprised as there does seem to be some elements from all three episodes thrown into this storyline.

A lethal cocktail of erratic memories, erratic behaviour and full on childishness is definitely on display as Clive Ambrose’s deadly vial has managed to have quite the effect on the student that go to Rossum college.

At some point we had to get an episode where our Dolls played together on a mission properly (okay we’ve had Echo/Sierra in “Stage Fright” and “Ghost” and “Grey Hour”), so having Victor as NSA man Tom and Sierra as Dr Gawa did make for a nice treat.

Victor and Sierra have become somewhat more interesting characters than Echo so putting them together in a bid to contain the students affected by the vial’s component was a good choice. That being said, you don’t need to be a genius to realise that if its effecting students, then surely the Actives and others are at risk.

Boyd being affected by the virus was reasonably subtle compared to the more overt reactions everyone else suffered. All he did was play the piano to Adelle and Topher over the phone and seemed unfazed when Echo refused to get some treatment.

I couldn’t quite tell if Adelle and Topher were either going to cry or wet themselves but seeing the pair of them affected by N7316 certainly reaped some excellent moments that I even ended up liking Topher a lot more here than in any of the episodes he’s appeared in so far.

Trying to insult Adelle, demanding her to check up on Mellie and pointing out just how much of a stick in the mud Dominic is shouldn’t be this funny but damn it, I was amused. And Adelle is equally as hilarious when she’s off her face as well. Olivia Williams has a flare for comedy that better not be restricted solely with this episode.

There were some insightful moments during Adelle’s blissed out state but one thing that I couldn’t get over was how the drug affected Dominic. Watching him constantly trying to apologise to Echo for trying to kill her was a laugh a minute, especially given that Echo at the time had no idea who he was. I won’t even mention the ‘soft like a kitty’ or the heavy gun moments. Needless to say they all added to the comedy gold as well.

However while there was fun and games to be had with seeing the non Doll workers of the Dollhouse more blissed out, the Dolls themselves didn’t get to any fun. In fact, the poor things just got a lot of bad memories thrown at them. It was hard deciding who to feel sorrier for.

Mellie’s insecurities over Paul’s fixation on Caroline had her fixated on citing her own trigger code. I did actually think that she was going to attack both Adelle and Topher at one point as well. Mellie did try to get Paul to lay off the Dollhouse hunt by dumping him and leaving for a while. I doubt she’s actually gone full stop.

Paul’s fixation on the Dollhouse isn’t something that will die down. Adelle knew that even though he’d be taken off the case, it wouldn’t stop him from pursuing. I’m not exactly sure if she’ll achieve anything by having Mellie play mind games with him either but the woman is certainly a tryer.

Victor also had some rather traumatic memories. I wasn’t particularly shocked to learn that he was a soldier (not sure why though, maybe I just didn’t want him to be a petty criminal) but the flashbacks were interesting enough. Was post traumatic stress the trigger that Adelle used into getting him to join the Dollhouse?

As for Sierra, that poor girl. It seems that she had a history of sexual abuse. Not only did we see Hearn raping her (so glad that guy is dead) but it also looked like another bloke did as well. He looked similar to Victor but it wasn’t Victor. I don’t think Victor would ever do that to Sierra, even if he wasn’t attracted to her.

Echo’s composite flashbacks however dominated the episode. A lot of viewers weren’t thrilled to find out that Caroline was an animal rights protestor who got her boyfriend Leo killed when trying to expose Rossum and their beyond frakked up experiments on humans, animals, brains, etc.

However it did some of the scenes with Echo and Adelle a lot more interesting. In a weird way, Adelle probably does have Echo/Caroline’s best interests at heart and clearly there has to be something else if she spent such a long time in trying to get Caroline into the Dollhouse.

The writers also drew some interesting parallels between Echo/Caroline and Sam as well. I should’ve seen that Sam would turn out responsible for the outbreak but I’m still surprised that Adelle hired him as a Doll. She also used similarly firm tactics like she did with Caroline in order to get him on board. I can take it that Sam will be making another appearance in the future.

So, who the hell are Rossum exactly? Even without Caroline’s excess moralising, it’s safe to assume that they’re evil. Adelle told Topher that she believed in their work but she didn’t really go into all that much detail as to why she believes in them. It’s nice that the episode threw a lot at us given how standalone the format has felt so far. I just hope the payoff will be worth it as well.

It’s funny how they called this episode, “Echoes” when the original pilot was called “Echo”.

Caroline/Echo: “I told you all I want is to be left alone.”
Adelle: “We both know we’re past that.”

Caroline’s surname was revealed as Farrell. Also wasn’t it incredibly stupid how Leo kept having to tell her to point the camera at the computer?

Mellie (to Paul): “You can’t promise. Its blind luck I’m not dead already. What you can do is drop the case. Let someone else handle it.”

We learned that Mellie’s name in the Dollhouse is November. Originally the character was supposed to be a regular but at least we have her in some capacity.

Matt (tied up): “Okay, it’s not actually that funny. Alice! Okay, that was the door.”

Topher: “This may take us a while. Be patient.”
Adelle: “What should I do – think about rainbows?”

Matt from “Ghost” rehired Echo as Alice and again we got motorbikes and bondage. I guess he’s a simple guy.

Boyd (re Echo): “Hey, wow. Could not maintain control of that situation.”

Adelle: “This is unbelievable.”
Topher: “What part of this was believable?”

Getting back to my inner child, a trampoline in the Dollhouse is fabulous. Is it Topher or just there for the Dolls to exercise on?

Topher: “Our problems are huge and indomitable.”
Adelle: “I could eat that word. Or a crisp.”

Caroline: “You are snide.”
Female Friend: “I love that about me.”
Caroline: “Me too.”

Surely the animal that Topher was going to name Adelle had to do with the female canine. Adelle probably would’ve strung him up if he had dared called her that.

I recognised Mehcad Brooks as Sam from the fact that he was in Desperate Housewives second season and has also popped up in True Blood, which I’ll soon be watching.

Topher (re Mellie): “Go check.”
Adelle: “I am your superior.”
Topher: “In every possible way. Go check.”

It’s a pity we didn’t get to see an affected Claire (who’s a no-show this week) and is Debbie another Doll or was Mellie lying?

“Echoes” is a good mixture of comedy, info dumping and some shocking stuff. Caroline’s flashbacks are unlikely to compel viewers but they do explain a lot about the girl and it’s just nice to keep things moving, even if it this show has a second year to look forward to.