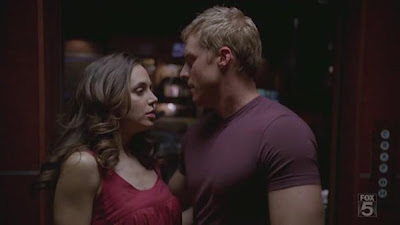 Kepler/Alpha: “I was nursing a tender throbbing hope that you’d give up, yeah.”
Paul: “Well, I’m not.”

Determination. The root of all good. Paul wants so badly to make a difference, take down the Dollhouse and rescue the girl. Unfortunately, one of the many things that Paul seems to lack is common sense and this is deadly obvious, even after he finally decided to take some affirmative action to actually find the Dollhouse itself.

All season long, Paul has been in an obsessive mode to bring the Dollhouse down but instead of focusing on the fact that there’s so many victims, all he’s bloody yapped on about is Caroline. Yeah, Paul, we get it, she’s in dire straits but so are the other poor sods that are stuck in the Dollhouse too.

Such as Mellie for instance. Paul decided to outright cruel and break up with her. Okay, while it made sense that by doing that, she would lead him to the Dollhouse; it did actually make hate Paul for it as well. Something tells me that this isn’t the first time he’s dumped a girl harshly.

Anyways much sympathy goes to Mellie for the simple fact that she genuinely believes she’s done something wrong to make Paul want to ditch her so coldly. I know she’s a Doll but, I don’t know. I think this episode did more harm than good for Paul’s character in the long run. Especially given how cold he was later when opting not to save her from the Dollhouse as well.

His determination to save Caroline I think is one big drawback for Paul – why Caroline? What makes her any more deserving than Victor, Sierra or November or any of the other Dolls we have yet to be properly introduced to? It also doesn’t help that Paul’s physical attraction as well as a lack of connection to Caroline are also factors in this whole scenario.

Getting help from environmental consultant Stephen Kepler also seemed a touch suspect. Paul’s been hitting so many brick walls in his continued search that as soon as he managed to contact Kepler, there was something about that that seemed to be too good to be true. Let’s face it; Paul is pretty crap at his job.

Alan Tudyk deserves a medal for this whole episode. I absolutely bought into him as the nervous, jittery, extremely paranoid Kepler. Especially for the comment where he said he hated buddy cop movies. Yeah, I’m not too big on them too but the banter between Kepler and Paul certainly added some humour to proceedings.

As for the Alpha reveal. The timing of the season did make it extremely perfect for the psychotic Doll to come out and play. There are times when I wish I hadn’t read spoilers and given that I knew weeks in advance that Alan Tudyk was going to be playing Alpha, I loved that we got fooled with the Kepler persona for a while.

Tudyk can also turn very quickly. The way he went from Kepler to Alpha, almost in a flash was downright impressive. Even physically there was a noticeable difference and while we should’ve seen more of the Alpha persona in this episode, the stuff we got was of quality.

Slashing poor defenceless Victor’s face was certainly a nice way of showing us how chilling Alpha could be (not that we needed it, given the bloodbath he caused all those months) and his scenes with Claire were equally creepy. I’m gonna say that Claire was a Doll called Whiskey because basically this episode confirmed that all too well.

We had Dominic in Victor’s body immediately refer to her as Whiskey prior to her sedating him and Alpha immediately didn’t recognise her as a doctor. The way Alpha taunted the truth out of her not always wanting to be a doctor was pure chilling. Alpha certainly is one scary bloke.

However if there is a flaw with Alpha, it’s that he follows a growing trend of people acting like Caroline/Echo is the centre of the universe. Yes, we know Eliza Dushku is the leading lady but Victor, Sierra and November still usurp Echo in being overall interesting and that’s not something that’s going to change over night.

With Paul and Boyd slugging it out, Alpha didn’t exactly have the most difficult of tasks in retrieving Echo, though he imprinted her with something before they left. What was it – a former lover? Are we going for a Bonnie and Clyde type of dynamic with Echo and Alpha? That might not be the best of routes to go on with this character.

As for Boyd and Paul, I really should’ve felt conflicted during the big fight scene but I wasn’t. I wanted Boyd to knock Paul into the middle of next week and I absolutely loved that Echo chose to help Boyd rather than Paul (Kepler’s right, stairs without risers are bloody dangerous, I don’t like them too). What does that say about me, other than my dislike for Paul being cast as the valiant Prince, who’s not that charming when you think about it?

I even got a kick out the confrontation scene with Adelle. I don’t particularly see Paul meeting his maker and I think that the Attic can be ruled out for him too. Seeing Paul as a Doll would be a good way of giving Tahmoh Penikett something else to do but Adelle would have to pull some strings to get him to sign a contract for five years.

Other interesting thing, other than Alpha finally stepping out of the shadows was Echo’s assignment of the week. Using the Sleeping Beauty story to help the damaged young Susan might have been more than heavy handed but it was a good template for the episode and it made me look at the story differently.

Paul is the Prince and the Prince isn’t that altruistic about his motives about saving the girl. You could argue that Boyd’s are when it comes to Caroline and Echo. Susan’s anger about Briar Rose being unable to save herself could be a post feminist jab but there’s some truth behind. Sometimes the only person who can save us is ourselves. That may end up being very applicable in Echo/Caroline’s case during the series duration.

Briar Rose is the original title of Sleeping Beauty and yeah, the allusions in this episode did come at us from all sides.

Mellie: “Stop being so cruel. Can’t you see this is killing me?”
Paul: “You’ll get over it.”

Imprinting Echo with bits of Susan (they even had the same name) was clever. We need more altruistic missions next season.

Topher: “Everybody wants to be righteous when they can afford it.”
Ivy: “Even Topher Brink?”
Topher: “This feeling... It is not unlike pride.”

Echo: “Are you keeping that book?”
Susan: “I’m fixing it.”
Echo: “I see that. It’s called editing. You can make a living out of that.”

Was this the first time we’ve seen Mellie’s handler? Sierra also got to be a forensics expert in this episode. Very CSI of her.

The real Stephen Kepler was killed by Alpha, which meant that he must have expected Paul to lead him to the Dollhouse. Couldn’t Alpha have gone there himself or was Paul needed as a distraction for Adelle?

Kepler: “They told me this was going to be a new Eden.”
Paul: “Eden wasn't a prison.”
Kepler: “What, are you kidding? The apples were monitored. Plus they didn't have a steam room that could recirculate human sweat and put it right back …”

Alpha discussed quite freely about the scars that he puts on people. I think that he also said that Victor’s would be different from Claire’s as well.

Boyd: “Sorry Agent Ballard. You don't get the girl.”

Chronology: No idea. How many months has it been since Alpha’s last attack on the Dollhouse?

At first the episode didn’t complete reel me in, probably because with “Briar Rose” so much does seemingly happen all at once, you need to process it. Once doing that, though it becomes a stunning episode that will also hopefully lead to an equally stunning finale if we’re lucky.

Best episode of the entire first season. Queen Jane does it again (almost makes up for that dire Harmoney story she wrote).

I've not heard great things about the finale either but I'll keep an open mind.

We're also getting Epitaph One on August 11th. If I can see the original pilot, I'll review that as well.

This was excellent. Better second time around as well.

Have you read Retreat Part 1? It's got some logic gaps but it showed improvement compared to the other issues this year.

I really enjoyed this episode, though like you the fact that I knew the Alpha reveal was coming, spoiled it for me somewhat as I was just waiting for it to happen.

I agree with you in the whole Caroline/Echo as the centre of the universe thing, its really annoying especially on Paul's part as he's never met her and he didn't even try to save anyone else. The Mellie thing (since she can ninja out on him) is maybe understandable but his focus on just her is just blatant attraction. If he'd known her from when she was Caroline I might've bought it, but otherwise he comes of as just wanting to be her 'Prince' and lets face it probably get off with her after she is so grateful to him for saving her.

You know in a way I think Dollhouse might have worked better as an ensemble show where we got to see a variety of Actives, instead of just a vehicle for Eliza Dushku; it would stop all the Caroline obsessing at least!


Poor Mellie I really felt for her, Paul was so cruel to her, though I understand why he had to dump her, but he could've done it in a nicer way. I was fearful she was going to jump (which without her handler being there she probably would've).

I also wanted Boyd to win that fight. He's easily the most likeable person in the show (apart from Claire) the others either morally suspect or blank slates.

I like the Briar Rose part of the storyline, it was a good mission and it was nice to see the Dollhouse used for good things.

You know in a way I think Dollhouse might have worked better as an ensemble show where we got to see a variety of Actives, instead of just a vehicle for Eliza Dushku; it would stop all the Caroline obsessing at least!

I'm quoting this for the very fact that a) I agree wholeheartdely with you and b) if Whedon has any sense, he'll give bigger roles to Mellie, Sierra and Victor next season because all three of them so usurp Echo in the interesting stakes.

Sierra, Victor and November have all become a lot more interesting as the season has gone on, whereas Echo has become less so.

I like Eliza Dushku and was pleased to see her with her own show, but whilst she's very good at the angsty stuff (Faith esque stuff) she's not very good at the more subtle or happy roles, which she really needs to be for this character.

"and I absolutely loved that Echo chose to help Paul rather than Boyd (Kepler’s right, stairs without risers are bloody dangerous, I don’t like them too)."

Er, other way around.

Yikes my bad will amend that one.