My Review of Doctor Who's 2x03: "School Reunion" 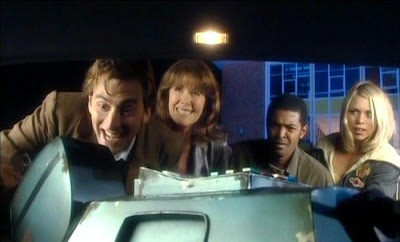 Mickey (to Rose, re The Doctor/Sarah Jane): “I have this little dance prepared.”

If ever there was an episode of Doctor Who that focused on old versus new, primitive versus modern, then it would be this and boy, wasn’t there a lot riding on this particular instalment.

It wasn’t for the fact that favourite to become a Doctor, Anthony Stewart Head had bagged himself a role as a main baddie in this episode. No it was simply for the return of two former assistants – Sarah Jane Smith and K9, and suffices to say, the pressure cooker was certainly on.

Last seen back in “The Five Doctors”, both Sarah Jane and K9 haven’t been forgotten over the thirty years that they’ve been off-screen. After all, there was a spin off, K9 and Company and Elisabeth Sladen contributing to the ongoing audio books but even the most easy to satisfy viewer will attest that a return of an iconic character can’t be just be for the sake of it but that there has to be an important enough reason for them to reappear and luckily enough, there was one here for both former assistants.

Our episode opened up with The Doctor, Rose and Mickey (in what is probably his most pivotal appearance to date) investigating a strict comprehensive school with super smart children and a creepier than thou staff, most notably Headmaster Finch. Well, let’s be honest, a school where the kids are more interested in trying to decipher an ancient code instead of lunch is always going to be suspect but funnily enough, our TARDIS team aren’t the only ones who are curious about this particular as The Doctor meets an old ally in quite a reunion.

Okay first of all, The Doctor actually meets Sarah Jane in the staff room during a break but she doesn’t seem to recognise him, despite The Doctor throwing a rather vital clue about who he is during their brief little encounter. Maybe she’s playing hard to get or is genuinely unaware, you decide.

However she more than recognises him later that night when she spots the TARDIS in the scary school and bumps into her old pal, along with Rose and Mickey before the four of them face one of Finch’s bat like cohorts and flee but it’s really from here that this episode gains huge momentum.

Dealing with new versus old, the face off between Rose and Sarah Jane is easily an episodic highlight and the pithy antics between Billie Piper and Elisabeth Sladen are a joy to watch. Even as a newcomer to the Who universe, it’s very easy to see Sarah Jane’s perspective every bit as much as it’s easy to see Rose’s.

From her standpoint, it feels like The Doctor abandoned her and replaced with the younger and perky Rose. In fact there’s something of a marriage analogy that is made between the hostilities and introductions with The Doctor/Sarah Jane/Rose that even Mickey makes a rather perceptive comment on it too.

Also having two strong minded women meet up and having them find out that they’ve both shared an intimate relationship with The Doctor and having seen so many things through him, it wasn’t an entire shock that they would clash over it. I loved the scene with both of them trying to compare the extent of their relationship with the Time Lord before they busted into a fit of giggles and bonded over The Doctor’s more eccentric manner.

As for Sarah Jane and The Doctor, well thirty years is a long time to go without maintaining some kind of contact and Sarah Jane was right on how she broached The Doctor about leaving her behind. David Tennant played well amongst Sladen during several character turning moments but I did find it strange that The Doctor didn’t articulate a real reason for his decision not to get in touch. Sarah would’ve understood about the Time War if he had told her.

But however much she wants to be with The Doctor (and she wasn’t exactly shy about that during the first half, given her initial hostility to Rose), she did acknowledge during an important moment that all things must move on, even if it painful to feel.

Sarah Jane’s appearance threw Rose into a sense of doubt about her relationship with The Doctor and now she’s got a new dilemma to ponder over. Instead of the fear of being killed or seeing people such as her Mum and Mickey suffering or dying, she now feels worried about being abandoned and sent home by The Doctor. Is she right to? Yes, she definitely is and even though The Doctor said/promised Rose that the same thing wouldn’t happen to her with him that it did with Sarah Jane, realistically we all know that this isn’t a promise he can ultimately keep.

Then there’s Mickey. Tired of feeling like a spare part, thanks to his interactions with both Sarah Jane and K9, he decides to become an assistant and surprisingly enough, The Doctor actually says yes. Rose doesn’t look particularly delighted with that prospect though, does she? Still though, time travelling with Mickey in tow should be an interesting if unlikely a permanent experience.

However the real highlight for me in this reunion special was of course, K9, the coolest robotic pooch in existence and wasn’t he a delight in stopping Finch and the Krillitanes from getting The Doctor to open up and be able to control time, space and matter? He valiantly sacrificed himself to save our heroes and the kids and wiped out Finch and his lackeys. So it was nice at the end when The Doctor gave Sarah Jane an updated version of K9. Despite her willingness to move, you could tell that she appreciated this particular parting gift as well as the deserved proper goodbye she got from The Doctor this time around.

As villains go, the Krillitanes were certainly an interesting bunch. Did they really want to unlock that code for the purposes of good? I doubt it but ex-Buffy actor Anthony Stewart Head certainly played well against David Tennant (who showed us his dark side again) and they also seem likely to make an appearance again. After all they nearly seduced The Doctor with the promise of keeping Sarah Jane young and saving the Time Lords. It’s like there was something really pivotal about their presence and mission or am I reading into things too much. Still though, their defeat at the hands of a robotic dog is beyond sweet.

Was it me or was it an incredibly audacious opening scene with Finch and that little girl at the start of the episode. Did he kill that girl because she was from a children’s home?

Sarah Jane: “Nice to meet you.”
The Doctor: “Very nice, more than nice.”

The name The Doctor used when he first met Sarah Jane was John Smith. She made a funny crack at the end of adding a Smith to the TARDIS team with Mickey.

Sarah Jane: “You look incredible.”
The Doctor: “So do you.”

What happened to Miles in this episode? He only appeared for like ten minutes and why didn’t that teacher kill Kenny when he morphed into his natural form? Were the kids aware on a subconscious level of what was really happening?

Sarah Jane (to The Doctor): “You didn’t mention me once?”
Mickey: “Oh mate, the missus and the ex-girlfriend. Welcome to every man’s worst nightmare.”

Finch described The Doctor’s race as pompous and The Doctor came out with the “one warning” statement again. We learned that Finch’s species take the best from various other species but have become allergic to their own oil.

Monsters the girls have seen included the Daleks, their emperor, gas mask people, dinosaurs, ghosts, mummies, Slitheen and werewolves. Rose has to win with the Dalek emperor bit though.

The Doctor: “I can stop the war.”
Sarah Jane: “No the universe has to move forward, even through pain and loss.”

Finch (to K9): “Little dog with a nasty bite. Not so powerful now are you?”

K9 was called “tin dog” by Rose and Mickey, “shooty dog thing” by Finch and “old friend” by The Doctor. It was a smart move not to modernise K9’s look.

There was a nice reference to “The Christmas Invasion” here with Sarah Jane and The Doctor discussing the Sycorax’s space ship. How far in 2006/2007 are we time wise?

Another pivotal reminder of the old series, “School Reunion” may be partly nostalgic but it was certainly a lively and discussion worthy romp on the nature of The Doctor’s relationship with his assistants and beyond their sell by date. Add superb guests like Sladen and Anthony Stewart Head and you’ve got the best episode this season so far.