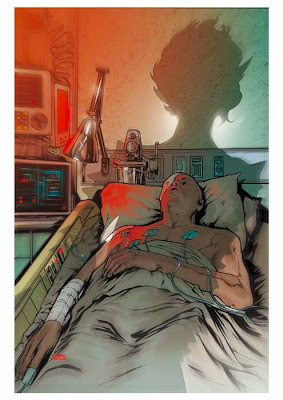 One of the things I enjoyed the most about the “Aftermath” five parter was the lack of Illyria. That means that having a one-off with her and Gunn centre stage didn’t appeal to me (though I like Gunn). The fact that it also is supposed to serve as an epilogue to the long winded “After The Fall” also didn’t help matter.

The thing about comas is that you really can wake up from them. Maybe if you’re Cordelia that’s unlikely to be the case but if you’re Buffy or Faith, you’ll snap out of them and also it seems, if you’re Gunn too.

The consequences of being the idiot who wanted to end existence in hell is that everyone remembers it and a fair chunk of that everyone also wants you to pay for it in a big way. Illyria is also one of those people/demons/whatever who feels that way. Of course, she’d take it personally.

I can understand her being hacked off with Gunn wanting to use her in a bid to end everything. However the interesting part of all this is that Illyria is conflicted when it comes to putting Gunn six feet under.

There’s the part of her that wants him to pay dearly for the havoc he created but the other part of her has stopped every assassination attempt that Gunn had to endure while he was in a coma. Though given Illyria’s love for dismemberment, I doubt protecting Gunn was all that much of a chore for her.

However when Gunn woke up as happy as Illyria (through Fred’s influence of course) seemed to be that he was alive, she still wanted to kill him. I’m not actually surprised that Gunn agreed with her. The characters in this particular verse really do feel guilt when they spectacularly go off the deep end. Gunn merely continues that trend.

Gunn’s waking up however was a bigger surprise. I thought that we’d go the Faith route and he’d just snap out of that coma but some demon lady, a former Lord woke him up instead. Gunn expected death and clearly wanted it. He wasn’t initially impressed when he realised that she healed him instead.

Demon lady’s motives for waking up Gunn were thankfully straightforward. She wanted to reclaim her former glory, set up her own league of super villains (look how that worked on Heroes) and even acted a tad surprised when Gunn refused her offer.

The demon lady also had a very brief interaction with Illyria. She was smart enough to distract the god in her bid to woo Gunn but she hadn’t banked on Kenny the T-Rex being so easily winded. Illyria tossing the girl into the air like a coin was actually kind of funny. Don’t know why though.

I guess the girl had it coming for threatening Illyria. If a T-Rex can’t stop Illyria, then what hope did that girl have of doing so? It’s not surprising how quickly Illyria would go from tossing away an opponent to focusing all of her energies on Gunn. After all, the issue made a point of highlighting that she was Gunn’s constant companion.

I liked that the issue showed various people visiting Gunn during his coma. Angel was able to forgive him and distinguish between Gunn the soulless vampire and the human, comatose version in that hospital bed while Betta George told him about a rehab for demons.

My favourite part of this issue was actually seeing Illyria tell Gunn the number of ways that she had considered killing him. It’s weird because I don’t generally care for the character (something that I’ve pointed out more than once in these comic reviews) but I really enjoyed her here.

She had every right in her own weird way to castigate Gunn for his actions. I even liked the reveal that Wesley and Spike’s memories of Fred were influencing part of Illyria’s decisions in relation to Gunn. Any traces/mentions of Fred are going to be made of win in my book.

This also led to Illyria believing that she’s become infected with humanity. Would an Illyria with a human conscience (or the ability to better mimic one?) actually be a more interesting Illyria to read about? Maybe, I guess. Though I’m unsure of as to whether or not she and Gunn’s road trip will be a long term thing. Isn’t he eventually going to have to face Angel?

The visit to the demon rehab that Betta George suggested was fun. It took me two reads to actually figure out that the woman Gunn was visiting was the demon lady that Illyria had thrown into the air. Gotta give Gunn his props for trying to get her redeemed. Angel would be proud of him.

Also in “Become What You Are”

The cover I got for this issue was demon lady’s shadow over a comatose Gunn.

Illyria (to Gunn, re Fred): “But what you did to me … she trusted you in the past and it led to her death. And I trusted you and I almost fell. Her influence makes me want to protect you but she was weak. That is why she died.”

The second cover for this issue (Nick Runge’s) with Gunn in the blue mist looks so much better.

Betta George (to Gunn): “I know that technically you’re not supernatural anymore. But they have a lot of vampires, werewolves, all sorts of demons and one of the first things they tackle is helping you cope with the guilt. Anyway, when you’re up and about, if you want, you can check it out. Left the address in your head.”

I should’ve mentioned it before but the last few issues seem to have IDW 10th Anniversary highlighted on the covers.

Illyria: “Charles. You’re awake. Healed. Good. I felt remorse for your situation.”
Gunn: “Thank you.”
Illyria: “But what you did to me … she trusted you in the past and it led to her death.”

Gunn: “You’re not infected with humanity. I’ve been in this bed for a while now. Doing nothing but thinking of what I did in hell.”
Illyria: “You are weak like Fred. You are riddled with guilt.”
Gunn: “Not just guilt. I miss it.”

Betta George: “Glad to see you’re up and about. You okay?”
Gunn: “Not even close, George. But slightly closer than yesterday.”

The Gunn/Illyria road trip plot will be continued in the five part story “Only Human”, which is coming out in August. There’s an interview with writer Scott Lobdell about it in this issue.

Gunn: “In fact, emotion, passion – those make you a better fighter.”
Illyria: “Truthfully?”
Gunn: “Swear.”
Illyria: “I am looking forward to getting in touch with my humanity.”
Gunn: “Me too lady. All right, let’s go.”

The Drusilla arc makes its debut in two weeks and there’s an interview with Juliet Landau in this issue about it as well.

Better than I thought it would be. “Become What You Are” is a surprisingly redemptive one shot for both Gunn and Illyria. I would’ve liked Angel to have played a bigger role in this but the issue was more satisfying than I expected.

The demon lady was Non, main antagonist of Spike: After the Fall.

Thanks for that. I often have a hard time figuring out certain characters in the comics because the artwork is really atrocious with some issues.

I'll have a review of the Drusilla issue next week hopefully. Thanks for you comments. Are you the same person who commented on my Buffy Retreat 2 reviews?