My Review of Doctor Who's: "Planet Of The Daleks" 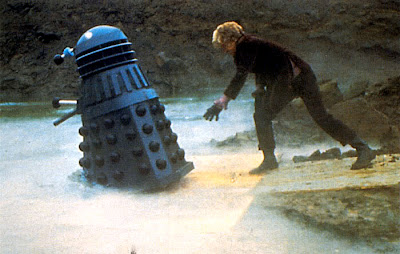 For Jon Pertwee’s penultimate season, they certainly pulled out the stops. Multiple Doctors in the first story and the cavalcade of The Master, Ogrons and Daleks in the previous story. This one is a continuation of that and while it’s not as compelling as the previous one, it does have its moments.

Landing on Spiridon for instance. The Doctor was badly wounded in the last story and made an effort to alert the Time Lords about what the Daleks were getting up to. The problem was that even The Doctor’s endurance only lasts for so long and he found himself in a coma for a good part of the first episode.

Jo Grant can often get a bad rap for being ditzy but over the duration of her tenure, she has gotten somewhat better and better. Here, instead of sulking about The Doctor’s coma, she takes the risky initiative into stepping out on Spiridon’s world in order to try and get some help for her friend.

I know it’s not exactly the most extraordinary thing in the world to do because every companion would’ve done exactly the same thing but fair play to Jo nonetheless. By stepping out into the world, she might have gotten the misfortunate of being poisoned for a while but she also stepped things into gear.

The Thals that landed on Spiridon wouldn’t have met up with The Doctor as quickly if she didn’t alert them to his current condition and when it came to trying to defeat the Daleks, the likes of Taron, Rebac, Vaber, Codal and Latep certainly wouldn’t have gotten as far without his help.

In the last story, the Daleks were planning yet another crack at taking over the universe. Here there’s no Master or Ogrons for back breaking stuff or pithy commentary. Instead the mostly subjugated Spiridon residents are helping their new masters, despite one of them rebelling to save Jo’s life.

When Wester later wanted to talk to the Dalek in command, I had a feeling that he was about to give up The Doctor, Jo and the Thals for some reason or another. Instead he risked his life to infect a few Daleks but killed himself in the process. It was noble of him but also a little stupid in respect.

The Daleks usually have some great schemes in a lot of their stories and while planning to release a bacteria that would kill everything on Spiridon as well as ensuring that they themselves were immunised made sense, it didn’t come off as well for them. Spiridon as a planet could be as a good but with molten ice pools, why risk it?

Also because I have to point it out, but is this one of the few Dalek stories that both the pepper pots and The Doctor largely don’t interact with one another? There’s one or two little scenes but for six episodes, they’re rather few and far between. I kind of wanted some proper Doctor/Dalek dialogue.

Also while it seemed to have taken the longest of times to actually reveal the Daleks big plan, it also felt like it was resolved in seconds as well. Having 10,000 Daleks in suspended animated is pretty good temporary solution for halting an invasion, but wouldn’t finding some more explosives to destroy them while in that state also have been a good one?

As for the Thal characters, this is probably the strongest thing about the story. None of them felt like ciphers. While Vaber and Taron’s opposing views about using explosives got a little tiresome, it was sort of easy to see both sides of their arguments. Similarly it was also easy to see why Taron found his affection for Rebac problematic.

Also this story had some wonderful exchanges between The Doctor and scientist Codal on the nature of bravery as well. Out of all of the Thals, Codal was probably my favourite and I’m pretty glad he survived and while the Jo/Latep love thing was a little rushed, I did feel bad for the latter when Jo declined his invitation to Skaro. You’re probably doing the right thing there, Jo.

Also in “Planet Of The Daleks”

Given the title, I think it was a shame that this didn’t actually take place on Skaro. I suppose they needed certain plot devices though – serious cold, Spiridon invisibility, etc.

Taron: “There’s no such place as Earth. It’s just a name in our old legends. It doesn’t really exist.”
Jo: “Believe me it does.”

There’s a nice reference to Susan, Barbara and Ian and “The Daleks” in this story. That made me smile.

The Doctor: “You still don’t trust me?”
Taron: “Why should I? You come here out of nowhere and claim to be something of a legend.”
The Doctor: “Yes, I see your point but I am on your side.”

The Doctor: “There’s a considerable difference between courage and reckless stupidity you know.”

This is the second story in a row where The Doctor’s had to convince someone that he’s from a legend long ago.

Codal: “Well, the one thing we have got is time.”
The Doctor: “On the contrary my friend. The Daleks don’t intend to let us rot down here.”
Codal: “That little machine of yours has quite an effect.”
The Doctor: “Had quite an effect. Not anymore I’m afraid. You know for a man who abhors violence, I must say I took great satisfaction in doing that.”

Interesting method of escape with The Doctor and Thals using the hot air and some materials to rise themselves away from the Daleks.

The Doctor: “You know after this, I really must take up hot air ballooning. It really is most exhilarating.”
Rebac: “I’d prefer a rocket to take me off this planet.”

The Doctor (to Taron): “It’s a good feeling, isn’t it? When the hunted become the hunters.”

I must say I was impressed with Jo’s little way of pointing to Earth for The Doctor to take her home.

The Doctor (to Taron): “When you get back to Skaro, you’ll be national heroes. Everybody will want to learn about your adventures. So be careful how you tell that story. Don’t glamorise it. Don’t make war sound like an exciting, thrilling game.”

This was released on DVD in October 2009 as part of Dalek War box set with “Frontier In Space”. There’s a really good commentary from Katy Manning, Prentis Hancock, Tim Preece, Barry Letts and Terrance Dicks.

I don’t think you’ll ever get a genuinely awful Dalek story out there but you’ll certainly get ones that are stronger than others. “Planet Of The Daleks” has a lot going for it but it felt rather slight after the previous story and the following story definitely surpasses it as well.

Sorry to disagree with you but there have been some god awful Dalek stories and Planet of the Daleks is most definitely one of them.

Maybe I've been lucky so far with the Daleks stories I've seen. I don't think this is brilliant but it had some good parts.

Happy New Year, Mark. Are you gonna review the specials when they come out on DVD?

Happy new year, Shawn. I am going to write a dvd review of the specials and Hamelt with David Tennant as well as all classic Doctor Who stories as they are released.