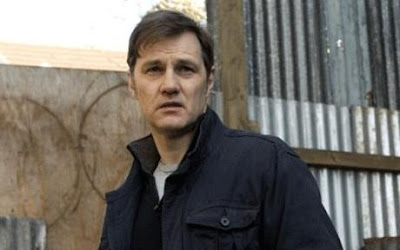 The last thing we need on TV is another cop show and while Thorne might not sound like the most innovative of things, it's actually quite enjoyable - well, the source material certainly is at least. But I'm hoping by tomorrow I can say the same of the series too.
Mark Billingham has written at least 10 books at the point about the character of DI Tom Thorne and over the next six weeks, the series version will play out Billingham's first two books, Sleepyhead and Scaredy Cat and as a reader, I cannot wait to see how it unfolds.
The victim of locked in syndrone is a creepy enough premise and certainly brings the foundations of Thorne going against his own team in order to try and catch the girl's assailant but what I liked about Thorne in the books I've read is how fleshed out he is as a person and I hope that translates with the series as well. Natasha McElhone is a great actress but her character - Anne Coburn was a little older in the book from what I recall and it should be interesting seeing Aidan Gillen as Phil Hendrix, the gay pathologist, given that he's one of the strongest characters in the books apart from Thorne.
Trailer: http://www.youtube.com/watch?v=OnSjvIujN_s
Thorne airs Sundays at 9pm from October 10th.
Posted by shawnlunn2002 at 2:25 PM