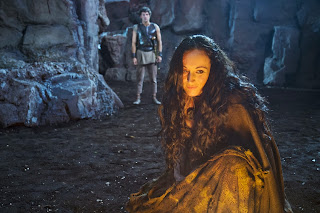 Ariadne: “I would help anyone who would see you dead.”
Pasiphae: “Then you have sealed your fate.”

Oh, dear – it seems the only thing that is consistent about this show is the characters annoying habits of being stupid in order to facilitate the plot. In this week’s one, Ariadne basically cemented her own death and gave Pasiphae the advantage that she had been looking for with very little effort.

Why didn’t Ariadne get rid of the evidence of Jason being in her chambers early? Why did she decide to trust Ione without barely knowing her with her secret harbouring of the assassin and why didn’t she just denounce her maid as a liar during her trial?

Then there’s Jason himself. If not killing Pasiphae was supposed to cement him as a good man with a conscience, then this episode failed especially given that he has killed lesser baddies in previous episodes. Ultimately, Jason should’ve just bumped the queen off (though maybe not on the latrine) and Ariadne’s life wouldn’t be hanging in the balance. Because of his own indecisiveness, she now is.

Not that I believe for a second that Ariadne is destined to die at the Brazen Bull though. No, she’s the love interest and she will survive but someone other than Minos needs to die in the next episode in order to push this show just the tiniest bit forward. At this point, it might as well be Pasiphae.

Another source of contention for this episode was Circe. It’s a shame the writers introduced a character with such potential and then bumped her off in such an unsatisfying manner as well. Not only did Circe respond as a predictable psychopath when Jason failed to kill her sister but Circe herself died in a pretty poor fashion as well.

It also begged the question – what was the point of her? Overman had a brilliant opportunity of another interesting female antagonist with a decent back story and one who could’ve helped develop Pasiphae as a character and he chose to kill her off before the two of them even got to interact onscreen. You genuinely have to wonder what goes on in his head. Even the least skilled of writers would’ve seen the potential for some great future material there.

As for Pythagoras and Hercules – well, they were a support system for Jason and little more. As episodes went, a few comedy scrapes here and there and one or two more serious scenes, there wasn’t much that either of them did that was really interesting.

Also in “Touched By The Gods Part 1”

Like it’s predecessor, it’s nice to see that this series seems to be going for the two part finale approach. I just hope something meaty happens in the second half.

Circe (to Jason): “The time has come for you to kill Pasiphae.”

For all her dislike of Pasiphae, why isn’t Ariadne suspicious that her stepmother might be bumping off her own father?

Jason (to Hercules, re Pythagoras): “When he wakes up, we’ll tell him he’s not an idiot.”

Pasiphae (to Heptarian): “Sometimes I struggle to believe I had such high hopes for you.”

Pasiphae seemed sincere enough when she was talking to Ariadne about her father’s death. If only the writers would show more of that side to her. It would make her a more interesting villain.

Ariadne: “To take a life is not an easy thing. The tables were turned, Pasiphae would not think twice before killing either of us.”
Jason: “We’re not the same as her. Surely that’s a good thing?”

Hercules (to Pythagoras): “Alright, let’s go and get killed together.”

The skeleton battle in Circe’s cave was actually pretty well done. I have to give the episode points for that alone. I’m still not feeling Jason/Ariadne as a couple though.

Chronology: Seriously, how long has Jason actually been in Atlantis at this point and why hasn’t he made some allusions to his former life?

To say that “Touched By The Gods Part 1” was better than the previous episode would be stating the obvious but as an episode, it still could’ve been better than it actually was. Even Ariadne’s fate at the end of this one doesn’t really feel like we’ll lose her as a character.