It's winter finale time and while past seasons of American Horror Story have given us something festive themed to go along with the macabre offerings, this one stays away from the festivities and focuses on just the macabre. 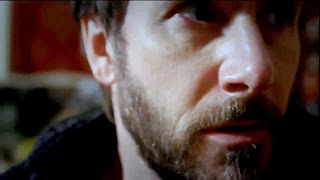 He Shoots, He Causes Gore: Ever since it was revealed a few episodes back that he was a witch hunter, Hank has spent most of his time either pining for Cordelia or being both his father and Marie's whipping boy. This episode not only delved into his fairly obvious history with his father and revealed that he tried to kill Misty, but Hank also got pushed that tiny bit too far by Marie and ended up killing most of her allies and nearly her until Queenie intervened. I don't know why but I'm kind of a little bummed out to lose Hank and despite Marie being forced into an alliance with Fiona at the end of the episode, I cannot sympathise with her at all. She essentially caused the deaths of her own friends because of her own hubris and the first chance she can get something over the coven, she'll inevitably take it as well.

An Eye(s) For An Eye(s): Okay, finally this episode properly confirmed that Myrtle did not blind Cordelia. Instead it was one of Hank's father's associates who did the deed. That being said, Myrtle was both determined to prove her innocence and to give Cordelia back her sight and did both in this episode. The fact that she paralysed the other two council members before taking an eye each from them (and killing them) both scared me and kind of impressed me as well. I've been somewhat lukewarm with Myrtle as a character but this episode was clearly her best yet. Now if she can tone down the Fiona bashing a little bit, we'll be good. And no, I am not forgetting Fiona's multitude of crimes as well over the last nine episodes. 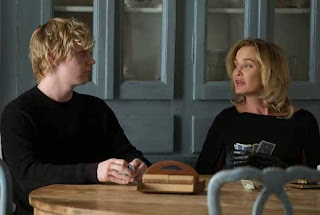 Guard Dog: Let's be blunt - being a bloke on this show is not good for you. This episode alone killed three main male characters, which effectively means that Kyle really is the last man standing now. I thought this was a better episode for him though (minus accidentally killing Fiona's guard dog) and I did like that Fiona played cards with him and spruced him up a bit as well. She's done more good for him in two scenes than either Zoe or Madison have done in nine episodes and she certainly didn't waste a great deal of time in pointing that out either. Actually on the whole, I could do with some more interactions with Fiona and Kyle. It's almost like a slightly healthier version of Constance and Tate from Murder House, isn't it?

Talking Head: You gotta love Kathy Bates. Even as a literal talking head, she's still has remained a highlight of the season and this episode had Queenie going to extremes in order to redeem LaLaurie.I'm not sure why Queenie is even bothering and I'm not sure if the idea of LaLaurie being redeemed sits well with me. However it did seem like Queenie's methods were having some kind of impact on LaLaurie but then again, so did hearing a bunch of people being massacred not far away from you would also do the same thing. I do wonder if she'll be restored to her body in the final four episodes before being killed off altogether.

Everything Else: Well other things did happen in this episode too. For instance, both Cordelia and Misty working alongside each other was just wonderful to watch. I can't be the only one to notice that Cordelia had more chemistry with Misty than she did with Hank, right? Oh and we found out that Joan murdered her husband and tried/probably succeeded in killing Luke as well for good measure. As for Madison, Zoe and Nan, this really wasn't their episode. All three of them didn't have a great deal to do and I kind of wish that Nan had put up more of a fight with Joan as well. Why was she brought back from the dead again?

The show's final four episodes will air from January 8th, where a figure from Marie's past will emerge, Stevie Nicks pops up and hopefully that never ending debate about who the Supreme is finally resolved.
Posted by shawnlunn2002 at 5:14 AM