My Review of DaVinci's Demons 2x09: "The Enemies Of Man" 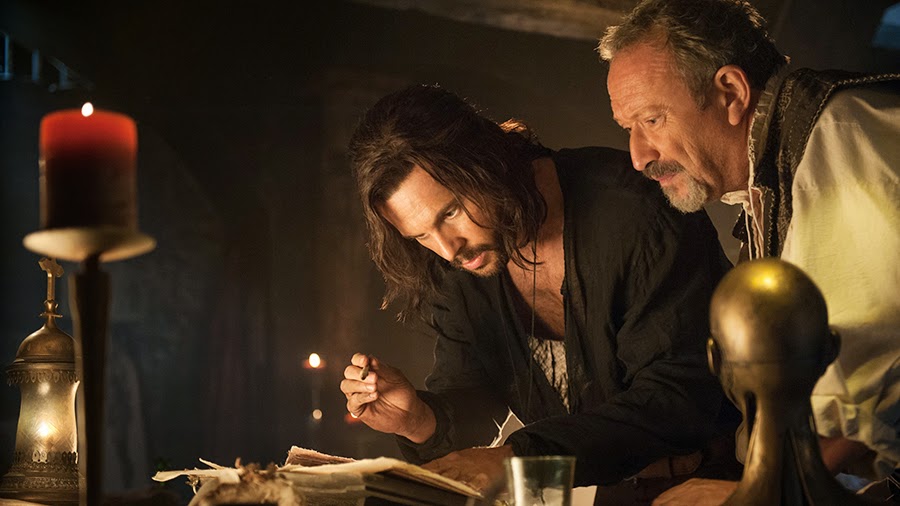 DaVinci: “I will fix this, maestro. I swear I will make this right.”
Andreas: “I know you will, boy. You know no other way.”

It hadn’t been since about three episodes since we’ve had an important death and with Riario losing poor Zita back in the New World, in this episode DaVinci ended up losing the one person who was anything in the way of a parental figure and all because another character revealed their true colours at the worst time.

I actually wasn’t expecting either Andreas to wind up getting the axe quite literally or even Carlo to be revealed as part of the Enemies of Man, but it certainly made the last five minutes of the episode all the more interesting as well. However, both outcomes are also something of a shame as well.

I’ve always enjoyed Andreas and his protective nature over DaVinci and it’s sad to see the latter lose him as well but I’m also sad that Carlo turned out to be a baddie after all. Maybe it’s because his concern for Clarice always seemed genuine or maybe it was just down to the fact that now he’ll probably be dead by a vengeful DaVinci or someone else in the finale but either way, it’s kind of a bummer.

However, dealing with the Enemies of Man has been rather overdue and this episode did delve into an interestingly shared history with Mama DaVinci (who’s still alive it seems) and Carlo while at the same time, actually proving that the Book of Leaves was nearer to Leonardo than he thought. In fact Carlo seemed to point out that it was closer than DaVinci actually thought as well.

I really do hope that by the finale, this Book of Leaves segment is done with once and for all. It started off as fascinating, petered a little, got a bit more interesting again and now it does feel like it’s a storyline that needs wrapping up. At the very least we need to know where it is before the Enemies of Man get their hands on it.

Keeping with the Enemies of Man – I don’t think it was too shocking that Riario ended up being recruited by them. He knew in this episode that his allegiance with DaVinci was over once they returned to Florence. Also given that he burnt his bridges with both his own father and Lucrezia’s, I guess joining another fanatical cult bent on ultimate power was probably the most logical thing for Riario to have done in the circumstances.

As for Florence itself – why didn’t previous episodes actually show the city being sacked properly by Duke Federico before DaVinci and his gang managed to defeat the sadistic ruler and Clarice went from being enslaved to killing her slaver as well? I feel it would’ve helped benefit the series had that been played out a bit instead of being skimmed over for the context of this episode alone.

However Florence wasn’t completely out of danger though. With Carlo and Riario showing their hands again, we also had the misfortune of Alfonso killing his father and denying any peace with Lorenzo as Sixtus looked pretty pleased with himself. I know I’ve complained about Alfonso all season but he’s still a tedious villain lacking any kind of depth and back story and the sooner he’s bumped off the better in my book.

Also in “The Enemies Of Man”

Was it me or did Riario look a tiny bit disappointed when DaVinci told him that their truce would come to an end when they returned to Florence?

DaVinci: “You do realise that Sixtus may show you none?”
Riario: “Perhaps that is what I deserve for worshipping false idols.”

Lucrezia’s ‘torture’ involved being asked the same three questions multiple times before she unwitting revealed information about her father. It’s interesting that her ‘torturer’ seems to think Lucrezia’s father is dangerous though.

DaVinci: “Lorenzo would never abandon Florence.”
Federico: “Yet here I am sitting on his throne, among his many luxuries.”

DaVinci (to Zoroaster): “We’re not leaving Florence. We have to take the city back.”

There were some nice moments in this episode with Nico trying to protect Vanessa from being raped by a guard and Zoroaster and Amerigo’s various exchanges as well.

Bayezid (to Lucrezia): “I trust you are as happy to see me as I am to see you.”

Federico: “I will be judged by my fellow heads of state.”
Clarice: “That you will. Guilty.”

I’m guessing from the bath Lucrezia was getting in this episode, she’s either about to be killed off or married off to someone.

Clarice: “Where does this humility come from? It doesn’t suit you.”
DaVinci: “I’ve had an enlightening few months.”

Carlo was revealed to having killed Cossimo in this episode, Andreas fixed the Brazen Head while DaVinci revealed that he learned to play the lute at eight as a girl and boy were involved.

Chronology: Not long from where “The Fall From Heaven” left off.

“The Enemies Of Man” - something of an engaging episode. It’s a shame that Riario fell into old patterns and that Carlo was revealed as a baddie but it was certainly an interesting to Florence nonetheless and the finale should be pretty interesting when we see it in a fortnight.

To make it a shock.

Right when the real Sixtus rejected Riario, I figured that he was going to fall in with the Enemies of Man. Remember, the Turk told Lucrezia that one day there would be a man who would use the Book of Leaves for the Enemies of Man and she would be the only one who could dissuade him. It suddenly came to me that it would be Riario.