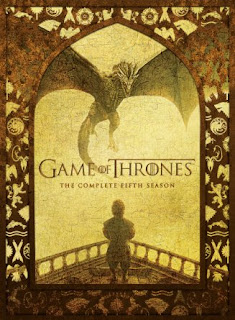 Changing Events: In this season alone, the writers had found themselves at a point where catching up with the books hadn't been an obstacle. It was a case of doing some things differently along the way too. This season mostly followed some of the events seen in A Feast For Crows and A Dance With Dragons but there was also some deviation from the material that was truly noteworthy. Some of this worked better than others did admittedly.

Sansa's storyline for example was merged in with both Theon and Ramsay's scheme to rule Winterfell and considering how that played out in the books, involving Sansa in this storyline actually seemed like a smart idea at the time. Then that wedding happened past the halfway point of the season and the audience's tolerance for this show's penchant for strong violence finally snapped in a big way.

With the absence of Joffrey, Ramsay really has emerged as the most deplorable villain of the bunch and his mistreatment of Sansa certainly upped the ante. On the plus side, at least Sansa was finally able to get away from him even she had foolishly rejected Brienne's help at the start of the season. As for Theon, yeah, still don't really care for him that much but he had some alright moments in the season.

Then there was Daenerys and Tyrion. Bringing these two characters together was a stroke of genius and the episodes leading to it with both Tyrion and Jorah as a grudging team was also a genius moment but naturally things went a little to pot during the finale when Dany herself managed to reunite with the Dothraki and they kind of seemed a little less than welcoming to see her. Dany has had stronger seasons and moments and while her affair with Daario is far from thrilling, at least she was spared a dull marriage to an even less engaging character.

Keeping with the great team ups, I loved seeing both Jaime and Bronn heading to Dorne in order to get Myrcella back (less said about the better), even if Oberyn's daughters, the Sand Snakes and Ellaria were less than exciting characters to watch onscreen. Still, it was a good team as was the one with Brienne and Podrick, even if those two were largely kept out of the main action until the finale.

As for Arya, well she had a learning curve in this season following her entry into the house of black and white. Arya's been getting colder and colder with each passing season but the way things panned out for her following her murder on Meryn Trant, Arya might have finally bitten off more than she can chew for a change.

Cersei was also someone who massively bit off more than she could chew this season. Her attempts of getting rid of Maergary and Loras with the Faith and Jonathan Price's pious High Septon led to the show keeping with the controversial walk of shame scene in the finale but it was also the first time that Cersei genuinely had to suffer consequences for her many misdeeds. In a lot of ways this season really was Lena Headey and she truly excelled as Cersei's downfall really came into the fore.

Then there was the Wall stuff. Not hugely compelling, other than Stannis truly losing the plot and sacrificing his own child before meeting a well deserved death along with the possible demise of Jon Snow and the events of Hardhome. I'm not sure where they'll go next season if Snow isn't brought back but at least Sam and Gilly had the sense to get out of there.

Again there are commentaries for the majority of the episodes (some with more than one) from various cast and crew members but there are also a smattering of other enticing features focusing on the poisons of Westeros, the set designs, Dorne (both weapons and an introduction to the place), a showcases of the locations for the season, new characters, trailers and a recap on the previous season. Once again, there's a wealth of stuff to enjoy.

Season 5 is currently available on DVD.
Posted by shawnlunn2002 at 6:12 AM