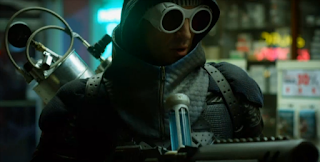 Let's get the obvious stuff out of the way first of all, shall we? First of all, it's felt like ages since we've actually had an episode of Gotham and secondly this episode is shamelessly lifting from the classic Batman: The Animated Series episode, Heart Of Ice and to be honest, why the hell not? Nowadays that episode is the definitive backstory for a certain chilly customer and the best one too.

On here, we're more into the before effects of things as poor Nora Fries's health is deteriorating and her husband Victor is doing everything in his power to try and save her. Mainly by freezing people, unfreezing them and hoping for the best. However until the last moment of this episode, his experiments were mostly failing but the man is a trier and deserves points for that alone.

Nathan Darrow from House Of Cards has turned out to be a great choice for the role of Victor Fries. His desperation to save Nora certainly made him sympathetic amidst the extremes he was more than happy to resort to in order to help his wife. Because of this, I really do want GCPD to fail in actually apprehending him even if they do have Nora in custody and rumbled his experiments as well.

The funny thing about this episode is that Victor was moments from turning himself in but to Alvarez's cynicism and his last experiment actually succeeding in quite a public manner, he decided to leave the station as quickly as he entered the place. On the plus side, this chilling story (I'll cut it with the ice puns from here) will continue on next week.

Of course it wasn't just Victor Fries popping up in this episode too. The show decided to really go for it and add two major villains with the second being Professor Hugo Strange and boy, is he a man with a few fingers in the pie, right?

B.D Wong not only looks the part a little too well for my liking but also embodies it a little too well as even Oswald (who was arrested, declared insane and sent to Arkham) seemed creeped out by him during their one scene in the episode. Also not only is Strange in charge of Arkham but he's also attached to the Indian Hill fiasco and now has Victor Fries to contend with as well. I can already say that he might be something of an improvement on Theo Galavan. He's certainly more dangerous for sure.

As for Gordon, the episode wasn't exactly plausible about how he was reinstated back to his job but aside from both Barnes and Harvey Dent clearly not believing him, at least we got to see Gordon and Bullock back to their usual buddy routine. After feeling a little underused in the previous half of the season, this one did feel like we got a little more Bullock than we had done in a while.

Dent: "Were you involved in Theo Galavan's murder?"
Gordon: "No, I was not."

Butch has become king of Gotham and Tabitha made a strong case to be his right hand woman which Selina observed from afar.

Nygma: "I don't like being called names, detective."
Gordon: "Sorry Ed, I'm sure Harvey was just being colourful."

I like that Nygma showed some support for Oswald in this episode while smartly denying his association with him to Gordon. However, he let some anger slip out with Bullock.

Victor: "I'm sorry."
Nora: "It's not that. I'm just thinking of all those poor mice you're experimenting on."

It's been a chilly month for DC villains on the small screen. We've already had Killer Frost on The Flash and Captain Cold as a regular on Legends Of Tomorrow. Victor even got his Mr Freeze moniker by the end of this episode.

Nygma: "Is there anything I can do to help?"
Oswald: "I'm beyond help. Forget me my friend."

Hugo: "Surely this must be a traumatic experience for you."
Oswald: "Please. This is a pillow fight compared to what I've been through."

A few no shows in this one - no appearances from Bruce, Alfred, Barbara or Theo but I'm guessing the latter being experimented on offscreen. We did get to see Lucius again though.

Nora (to Gordon/Bullock): "My husband did terrible things but he did these terrible things for my sake. I'm dying, he wants to save me. I can't tell you how sorry I am but I can't betray him.

Chronology: 27 days since the events of Worse Than A Crime.

That was a really great opening episode. These mini-arc that the second have been doing have worked a treat and having both Mr Freeze and Hugo Strange in the same episode worked a treat. Mr Freeze was a chilly, but sympathetic installment.