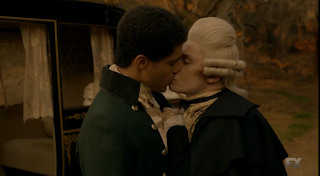 Edward: "I love them you know, the paintings, even more than I love you."
Manservant: "Stop talking and make love to me."
Edward: "Fine but first, let's rouge each other's nipples."

Yes, that was an actual exchange of dialogue in this episode and after a four episode absence, Evan Peters finally made his debut in this season and it was certainly worth the wait. Is it really too much to say that Edward Fellipe Mott is now my favourite character he's ever played? Maybe but I really don't care.

Like with March from last season, Peters just shine better when he's playing a more theatrical character than an angst ridden one and here we got to see Mott cherish his paintings over human company to the extent that he took his vengeance out on the servants before coming to a rather sticky end at the hands of the Butcher and her crew within the first ten minutes of this episode.

Also after playing a slew of lady killers (well, two technically). Evan's character here was not only a descendant from Gloria and Dandy Mott from the fourth season but he was also openly gay and seemed to have no problem kissing his hunk of a manservant in front of people while wanting them to rouge each other's nipples (that line is going to stick with me all day now). Alas though, things did sour with them over the wrecked paintings debacle and the former being killed off.

However while Edward was highly strung and needlessly horrid to the rest of his staff, he did somewhat manage to redeem himself in this episode. Namely by helping Matt, Shelby and Flora twice get away from the Butcher but he couldn't exactly help them get away from the equally as menacing Polk family.

For those of you missing Frances Conroy, this episode was a joy because she finally returned to the series after sitting last season out. Here was she was the scary Polk matriarch (of which Chaz Bono's character was also a part of) terrorising Matt, Shelby and Flora when she wasn't trying to feed them some of Elias's foot for good measure. I've missed Conroy and if this is her only appearance this season, then it was certainly worth it but I hope she shows up again of course.

As for the Butcher storyline, the ending for it felt a little abrupt and with the absence of Scathach, also a little strange. I did like that Ambrose conveniently developed a conscience and sacrificed his murderous mother and self in order to prevent Flora from being killed while Edward untied Matt and Shelby and Lee managed to also provide a getaway vehicle as well.

Now the question seems to be where do remaining five episodes go? It seems that going by the trailer for the next episode we'll finally be going behind the scenes of My Roanoke Nightmare and more than likely Matt, Shelby and Lee are probably going to be forced to revisit that house as well.

- So we got nods to The Grudge, Misery and Texas Chain Massacre in this episode.
- Another voice added into the episode was real life historian Doris Kearns Goodwin and next week we finally get to see Cheyenne Jackson's producer in the flesh. Still waiting on Matt Bomer and Finn Wittrock though.
- Five episodes in and still no opening credits. For crying out loud, can we please sort this out already? I miss not seeing strange titles to accompany this strange show.
- Chronology: Shelby talked about being there for months but surely it was only a week or two since the first episode.

Chapter 5 easily could've been the finale for this season and I think for some viewers, it would've been a relief but instead it offered an illuminating history lesson, finally got Matt/Shelby/Lee/Flora away from that house, stunning performances from both Evan Peters and Frances Conroy and a nice shake up for the remaining episodes.

I had a feeling the "dramatic re-enactment" wouldn't last the entire season. I like that this episode brought it to a timely conclusion. I was ecstatic to see Evan Peters and Frances Conroy in their roles.

BTW Edward was Dandy and Gloria's ancestor, not descendant.