My Review of How To Get Away With Murder's 3x03: "Always Bet Black" 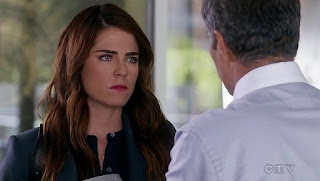 Annalise (to Toby): "You killed two innocent women and you still think you get to complain? Say you'll take the deal. Say it!"

The one thing I've really been enjoying this season so far is that the cases of the week have actually been a lot more interesting than some of the ones from last season. This week we had Annalise and Michaela (before the latter was dropped) defending the rather sleazy Toby Solomon whose actions resulted in two women being killed.

Of course, Toby only went down for one murder and only after Annalise and Bonnie had discovered that he was being blackmailed by another lawyer. Personally, Toby is one of those cases that a part of me would've been happy to have seen Annalise lose but I do think she came up with an effective way of making Toby pay for his crimes while getting even on the opposing council who had it in for Annalise.

Not to mention the fact that Annalise's little victory also curried some favour with college President Soraya as well. However going back to the night in question though, we've got Annalise getting a mugshot down the police station, Oliver erasing the contents of her phone and another person whom we can rule as dead - Bonnie. More to the point, the episode also revealed that two bodies were in the house and one of them still has a pulse so the game has certainly been upped a little here.

Keeping with the game, the hunt for Frank took an interesting turn this week. Laurel was sent to make nice with her father (the role recast with Esai Morales) and while that was a mixed bag in the sense that neither of them completely resolved their issues, we did get at least an insight as to where Frank was hiding even if Laurel decided to keep that information from Annalise and Bonnie. I liked that we learned a lot more about Laurel's family in this one.

As for the rest of the episode, there was moments of domestic bliss with Annalise and Nate, Bonnie making a point of not caring about Asher/Michaela being a thing while also going over her past with Annalise and both Connor and Oliver being awkward around each other during a night out at a casino. I did like that Connor stood up for Oliver when a vacuous himbo was dismissive of the latter, so maybe there's hope of the two of them reuniting, yeah?

- Annalise slightly outed herself as a Connor/Oliver shipper too but Asher is really taking home the crown this season with it. I also loved Oliver's gaping at Nate.
- Frank told Laurel about Annalise trying to kill. Meggy suspected that Wes is into Laurel and Laurel herself was kidnapped when she was 16.
- Going by the trailer for next week, Annalise is going to have to deal with the consequences for slapping her client, even if he did deserve it.
- Chronology, from where the end of There Are Worse Things Than Murder left off.

This season keeps flying off the charts with it's craziness and Always Bet Black continued with that as well. Now on top of trying to guess who died, we also have to guess who is barely holding on as well. This certainly got more interesting.