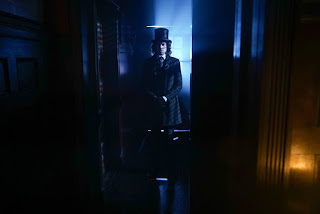 Jervis: "Are you ready to do something impossible?"

Did anyone else get the feeling that this episode was something of a season premiere, mark 2? With the first two episodes wrapping up the Indian Hill storyline kind of and having Fish Mooney take her leave of the city, this episode decided to add another member of the Rogues Gallery into prominence. Enter Jervis Tetch, aka the Mad Hatter.

Mad Hatter is one of the most unsettling villains in the Batman universe for a number of reasons and this episode went to town with two of them. Armed with a pocket watch and hypnotism, Jervis made himself a popular hit within Barbara and Tabitha's nightclub that he even decided to kill one of his victims (after getting them to murder their own spouse) and set up shop in Gotham.

Tetch's ability to hypnotise was certainly eerie and when Gordon predictably got on his nerves, Jervis attempted to get the bounty hunter to kill himself, only for Alice herself to step in and get a little trigger happy. While Alice managed to save Gordon's life, Tetch is still a problem for the city at the moment.

While I do think the show shouldn't have revealed Tetch as a villain as quickly as they did in this one, I will give Benedict Samuel props though. He's off to a great start with Jervis and has certainly embedded the character with a suitable amount of menace. Similar praise should also be heaped onto Naian Gonzalez Norvind as the desperate Alice, unable to escape from her clingy brother while having to deal with some Poison Ivy esque powers to boot. However unlike Jervis though, it does seem like Alice is meant to be more of a sympathetic character despite her powers.

Speaking of Ivy though, Selina decided to step up her own investigation into her friend's disappearance by going to Bruce but he was a little too preoccupied to really be any use to her. However, number Five or Clone Bruce decided to offer his help after giving himself a haircut and treating himself to some of Bruce's clothes and one of the cars. Of course, nothing could possibly go with this particular plan but it certainly didn't take long for Five to reveal his true intentions though.

Keeping with the big storylines, Oswald decided to put himself up for Mayor and considering how much of an incompetent boob Aubrey James has been in the role, I'd be voting for Oswald too. While it's obviously paying lip service to the same plot from Batman Returns, it's certainly entertaining and the fact that it's also resulted in Nygma also getting the all clear to leave Arkham means the potential is truly there for some great stuff ahead.

- Leslie has resumed working in GCPD and it was revealed that she's engaged to Mario Falcone (whom Gordon briefly met). Carmine on other hand seems understandably wary of Leslie. Gordon and Valerie are also a thing now.
- Despite her appearance last week, Ivy sat this episode out along with Lucius.
- Both Jervis and Alice had an Indian Hill connection as the latter was there under Hugo Strange's care. Benedict Samuel has also been promoted to a series regular.
- Chronology: not too long since the events of Burn The Witch.

Another strong episode, Look Into My Eyes has certainly given the Mad Hatter storyline a satisfying start, while setting up some new and interesting plotlines and intensifying a few others. While I do think they should've held back on showing Jervis's villainous side all at once, I was still pretty impressed with this one.