My Review of Empire's 3x03: "What Remains Is Bestial" 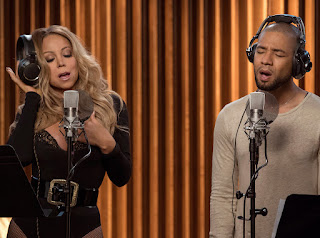 Tariq (to Andre): "You are your father's son after all. We shall see. It doesn't take much to put the screws on a black man once he's part of the system and you ain't no ordinary black man."

Last week the episode ended with Andre getting attacked by cops. This week the episode ended with uncle Tariq threatening more cops on Andre. In between that, Andre also was charged for assaulting cops, which he didn't do. Needless to say that along with another Ghost Rhonda appearance and Lucious being unsupportive, this wasn't Andre's week at all.

Tariq's obsession with taking Lucious down has certainly gotten nastier and more desperate after the camera in the stuffed bear was discovered. Threatening Andre like that at the end of this episode means that Andre for all his protestations otherwise will probably end up having to snitch on Lucious after all. Considering that Lucious continues to treat Andre like dirt at times, it wouldn't be the most shocking of developments.

This week though, it seemed like Lucious was more and more determined to antagonise everyone. He continued to ridicule Jamal's PTSD, lament on Hakeem being spoiled when he wasn't having a go at Andre and calling his kids out for the privileged life that he's given them. On top of that, he also went behind Jamal's back and released the Black & White album before declaring war on Cookie.

On the plus side and in spite of my current feelings for the character, at least Anika was a little better at playing Lucious at his own game. I did like that she pulled exactly the same stunt on him that he did to her in the episode earlier and I also liked that she genuinely rattled him as well. I'm also loving the growing hatred between Leah and Anika as well because it's inevitable that something crazy is going to come out of that too.

As for the rest of the episode, between seeing Hakeem acting like a spoiled brat over Tiana performing with another rapper and being disturbed by Shyne's treatment of Nessa, he was somewhat annoying in the episode. Using Tiana's track was an act of spite even if it upped his vocal game though.

Jamal didn't fare much better in this one either. His attempts of group therapy were a bust and seeing Freda in prison did more to intensify his anxiety than anything else. On the other hand, I did like his scenes with Kitty (Mariah Carey giving a serviceable performance) and their duet was definitely the highlight of the episode but I really want Jamal to get his groove back fairly soon.

- I do like that Angelo is posing a good threat with Lucious and Cookie as the latter seemed more enamoured with him this week.
- I wonder how many more ghostly appearances of Rhonda we're going to get this season.
- Standout music: Easily Jamal/Kitty's Infamous.
- Chronology, more or less from Sin That Amend left off.

Not really an amazing episode. Duet aside and the final scene with Andre/Tariq, I found myself drifting during most of What Remains Is Bestial if I'm being honest. I guess I'm waiting for something bigger to happen than what currently is at the moment.