My Review of "Dead And Gone" 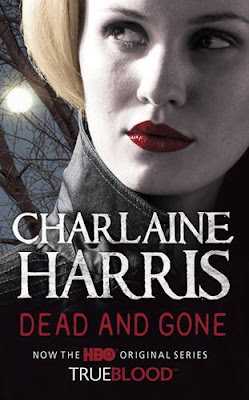 Written by Charlaine Harris
Released in 2009

Niall (to Sookie): “The vampire is not a bad man and he loves you. Goodbye.”

Like Sookie at the end of this book, I too also wondered about which vampire in particular that Niall was referring. I know both Eric and Bill love our little telepath but who was Niall referring to the most?

In this book alone, Bill could almost be forgiven for the crap he’s previously put Sookie through because he did basically almost die in this one trying to protect her from homicidal fairies, Neave and Lochlan. Unfortunately while this book has given Bill more to do than previous ones, he’s still being petered out of the way even further.

Sookie might have softened considerably towards him but it’s this time that her bond with Eric has become much stronger. Not only is she forced to drink from him again but there’s also plenty of shagging from the pair in this one as well as Eric tricking her into marrying him of sorts.

Now this is a continuous problem that I have with Sookie and Eric as a romantic pairing. Nothing we’ve seen of them seems to be down to choice. Eric might have good reasons for often maintaining a powerful grip on Sookie but it makes it difficult to ship the pairing when Sookie’s constantly being tricked or treated as a possession by Eric. It would be nice to see them as a couple without the blood feedings and arranged marriage bits in the next few books. At least then we could see if they really do have a future together.

Speaking of futures, it’s interesting that Quinn briefly popped up in this one to read Sookie the riot act on dumping him. He probably didn’t help his case by castigating her about her bonds with Eric, Bill and Sam but he wasn’t completely without point. In the TV series, I can’t see a Sookie/Sam pairing but the books open up the possibility of it.

The last book had Sam trust Sookie with a lot of personal knowledge about his family background and here he had to rely on her to run Merlotte’s when his stepfather shot his mother. It seems that even people in Sam’s family had difficulty accepting the public outing of weres in the world.

Outing the were segment of the supernatural world was hinted in the previous books and this one, there is a mixed reaction of sorts. Most people seemed okay with the idea but you also had Arlene and her Fellowship boyfriend attempting to kill Sookie in protest of this revelation. Never have I wanted a character in a book like Arlene to die horribly as a result. Sadly she didn’t.

Speaking of murders though, not did this book kill of Crystal Norris in a rather grisly way but Sookie herself got the shit tortured out of her by Niall’s rivals and even poor Tray Dawson became a casualty in the rising fairy wars that dominated a large segment of this book. Without sounding like a sadist but I do hope that this is something that winds up on the TV series somewhere down the line. I actually like all this faerie politics and I sort of hope that Niall isn’t completely gone from Sookie’s life, even if it looks like that poor Claudine is as well. At least Amelia and Tara are still around.

- Dermot bore a resemblance to Jason, which was supposed to explain Niall’s resistance towards wanting anything to do with Jason. I actually don’t blame Jason for getting mad at him.
- Both Tara and Claudine were pregnant in this book and Crystal was still pregnant when she was murdered by Neave and Lochlan. They also killed Sookie and Jason’s parents.
- We didn’t get much on Hunter in this book but I’m sure later ones will follow up on it though. Sookie even considered communicating with him while she was being tortured but fought against the urge.
- Tanya briefly reappeared in this book as well and Octavia moved out of Sookie’s house.

Certainly a strong book in parts but also rather grisly too, torture wise. If a man had written “Dead And Gone”, I’m sure there would’ve been controversy for the murder of two pregnant characters but perhaps Charlaine Harris gets to get away with it. It’s not the best book from the collection but it won’t leave you bored either.