My Review of Doctor Who's 5x10: "Vincent And The Doctor" 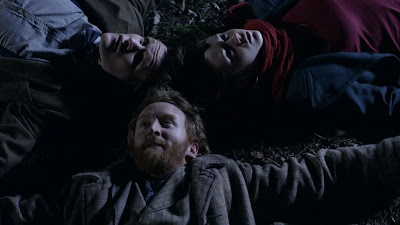 Vincent: “I believe there are more wonders in the universe than you have ever dreamed of.”
The Doctor: “You don’t have to tell me.”

By any chance would one of these wonders be this episode in particular because it bloody well should be? If you find yourself surprised at my gushing of this week’s episode, then clearly you and I were watching something entirely different. Seriously, this episode was that good and then some.

Historical figures are a great part of Doctor Who and within the confines of 2005; we’ve had the likes of Dickens, Queen Victoria, Reinette, Shakespeare and Agatha Christie all playing some vital impact on the Doctor. Even Queen Elizabeth the first but I don’t think she’d be as quick to offer a glowing recommendation of the Time Lord.

With this episode, it was time to meet an artist and I have to admit, I actually did think that when the day would come, it would be DaVinci but I’m certainly that it wasn’t. I’m not going to pretend that I’m an enthusiast of Vincent Van Gogh but this episode certainly made me see him in a whole new light.

For starters, you had the museum in Paris bits where the Doctor and Amy realised that a sinister looking monster was in Van Gogh’s painting and after getting some vital information from Dr Black, it wasn’t long before the Doctor and Amy actually met Van Gogh and first impressions were the order of the day.

Shakespeare might have been able to get away with telling his audience to shut their mouths after one of his plays had ended but Van Gogh couldn’t even sell a painting in the local cafe to get a drink. Mockery was the mood when it came to Van Gogh as even the waitresses’ poured scorn over his credentials as a painter.

However for Van Gogh, he was oddly used to it. Sure, he might have been a little desperate when trying to sell a portrait but he took an instant suspicion to the Doctor’s attempts of pandering to his better nature. I’m guessing that on a list of failings for this Doctor that maybe flattery is one of them. Even I rolled my eyes a little and I believed the Doctor when he was praising Vincent.

As for Amy, that girl is so sweet; she could attract a whole hive if she put her mind to it. Vincent barely wasted a second to notice her and he was certainly impressed with what he was looking at. The thing is though, Vincent’s flirting with Amy though frothy never feels as strong as Shakespeare’s was with Martha and I don’t mean that in a bad way.

I thought seeing Amy getting pal-like with Vincent might a bad thing in light of Rory’s death but actually it’s really not. I’m still unconvinced that Rory is permanently gone and I also noticed how easily Vincent picked up on Amy being sad, even if she actually had no idea why she was that way inclined. This is a good thing. Certainly means that Rory is lingering in her subconscious.

But it’s also one of many perceptive moments from Vincent as well. After all, he was the only person in this episode who could actually see the Krafayis and while it’s never stated that it’s due to Vincent’s mental state, it is an interesting thing nonetheless as the Doctor himself had difficulties seeing the creature without the aid of some strange contraption that didn’t last very long in the process.

Another interesting thing about this episode was the monster itself. I’m gonna admit that the Krafayis looked a little silly but the one thing I loved was that it wasn’t a malicious creature. I know it was responsible for a death and did try to kill the Doctor a few times but largely, it was blind and confused and when Vincent killed it in self-defence, he was remorseful for his actions.

It had taken the artist to piece together a lot of stuff about the Krafayis than the Doctor did. He had realised far too late that the creature was lashing out and he could relate. He had had his moments in this episode where he was sinking into depression and lashing out at the Doctor.

Also Vincent had been aware of the Doctor’s interest in the church, picking up on it almost as immediately as he did with Amy’s sadness. He even found himself instinctively following the Doctor and Amy into the church when the Krafayis was on the rampage and pretty much saved their lives in the process.

But as amazing as Vincent was in this episode, he didn’t believe in himself all that much. You don’t need to be a tormented artist to be able to relate that element of self-doubt as it’s pretty innate. It didn’t matter how many times the Doctor and Amy tried to convince him that he was a good artist; Vincent simply didn’t buy it until he got physical evidence of his greatness.

I always find it a bit strange if the Doctor decides to bring a historical figure into the future to show that their work lives because it is technically interfering but I’m going to make an exception for this one though. Seeing Vincent being confronted with the fact that his work lives on might have been emotionally manipulative but damn it, I nearly cried during that scene.

Tony Curran was constantly effortless throughout the entire episode but the moment Van Gogh is in the Paris gallery and overheard Dr Black cite his work so highly was some of the best television ever on this show, especially as it continued in my opinion a trend of the series maintaining its emotional impact throughout the season.

Of course, despite the resurgence of his self-belief, the episode wisely didn’t alter Van Gogh’s sad outcome, even if Amy wanted the Doctor to rewrite time on it as well and that’s where else this episode works so effortlessly as well – the Doctor telling Amy that even bad things don’t spoil the goodness that is out there. For an episode that is pretty heavy in parts, the end message is actually quite life affirming.

In terms of the arc stuff though, this episode isn’t awash with anything really new. There were no mentions or visuals of mysterious cracks, mentions of the Pandorica opening or silencing falling but we’re at the point now where the Doctor and Amy are getting closer to the Pandorica and all manners of craziness breaking loose.

Also in “Vincent And The Doctor”

Bill Nighy might have had a short role as enthusiast Dr Black but he pulled in a lovely understated performance in this episode.

There was another mention of bowties being cool when the Doctor and Dr Black complimented each other’s choice in them.

Vincent (to the Doctor/Amy): “I’ve come to accept the only person that's gonna love my paintings is me.”

We got visuals of William Hartnell and Patrick Troughton in this episode along with a slight redesign of the TARDIS console.

The Doctor (to Krafayis): “I hope we meet again soon so I can take you home. Maybe not that soon.”

Amy outside in the sunflowers really was a striking visual in this episode. The camera really loves Karen Gillan, doesn’t it?

Vincent: “Yes, well I may be mad. I’m not stupid.”
The Doctor: “No, quite and to be honest, I’m not sure about mad either. It seems to me depression is very complex.”

The Doctor (Amy/Vincent): “Is this how time normally passes – really slowly, in the right order? If there's one thing I can't stand, it's an unpunctual alien attack.”

Seeing the Doctor physically bored with how long it took the Krafayis to appear at the church was an amusing touch. Eleven really is impatient, isn’t he?

The Doctor: “Can you breathe a little quieter please?”
Amy: “No. He’s gone past.”

The Confidential for this episode showed Tony Curran looking at Van Gogh’s paintings in California and this episode was also mostly filmed in Croatia along with “The Vampires Of Venice”.

The Doctor (re Krafayis): “I suppose we could try talking to him.”
Amy: “Talking to him?”
The Doctor: “Well, yes, might be interesting to know his side of the story.”

Amy (to the Doctor): “Oh get a grip, this is not a moment to re-evaluate your self-esteem.”

This episode actually featured music when the Doctor and Amy went back to the Paris gallery for a second time. ETA: It's "Chances" by Athlete.

Dr Black (to the Doctor, re Vincent): “He transformed the pain of his tormented life into ecstatic beauty. Pain is easy to portray but to use your passion and pain to portray the ecstasy of joy and magnificence in the world, no-one had ever done it before. Perhaps no-one ever will again.”

Chronology: Within the confines of 2010, though a specific date wasn’t given.

Without a doubt an amazing episode. “Vincent And The Doctor” nearly had me in tears, gave a truthful look into mental illness, forged a genuine rapport between the Doctor, Amy and Vincent and just had some sublime dialogue, character moments (hand holding for all three, this show’s take on “Starry Night”), so basically, what more could you want? I had my reservations about Richard Curtis but he nailed this one perfectly.