My Review of Doctor Who's 7x01: "Asylum Of The Daleks" 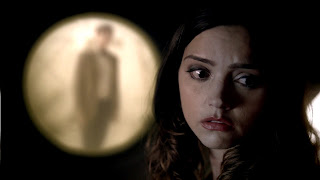 Oswin (to Rory): “Do you know how you make someone into a Dalek? Subtract love, add anger. Doesn’t she seem a bit too angry to you?”
Amy: “Well, somebody’s never been to Scotland.”

There are times when being blissfully unaware of big spoilers can be a massive benefit and despite the numerous press screenings for this episode over the last few weeks (London, Edinburgh, New York, etc), I am bloody glad that the biggest of them all was kept a secret because knowing it might have deterred the impact for me.

Jenna-Louise Coleman immediately commanded attention as the flirty, fun, red dress wearing, soufflé burning, computer genius also known as Oswin Oswald. A very unusual name with an unusual introduction but it doesn’t alter the fact that her appearance in this episode alone was a completely pleasant surprise from the off.

I had kind of hoped in my wildest dreams that Miss Coleman would get a chance to actually work with the outgoing Karen Gillan and Arthur Darvill, so having Oswin doing her damndest to help the Doctor, Amy and Rory throughout the episode as they faced the very definition of a Dalek hell was another blooming treat. And then came that horrible revelation as well.

Oswin being a Dalek completely and utterly floored me as a viewer. I spent this entire episode being entranced by her, enjoying her flirting, her observations on Daleks and our heroes and when it looked like the Doctor was going to rescue her along with Amy and Rory, Oswin only went and became a Dalek.

The idea that it had happened to her over a year ago and she had been so traumatised by the experience that she believed she was human added a cruelty to the thing as well. We all know by Christmas time, Jenna-Louise Coleman will be back on the show as a character rumoured to be called Clara Oswin but whether or not there’s a connection between Clara and Oswin remains to be seen, though I am thinking they’re the same person/descendants of some kind, etc.

Still, even being a Dalek didn’t stop Oswin from doing the ultimate game changer on the show – she made the Daleks forget about the Doctor. The Doctor’s been trying to be Mr Unknown for a while now and now, thanks to Oswin, he’s managed to get his wish and then some. It’s a pretty ballsy move on Steven Moffat’s part to do something this genuinely audacious but it’s definitely a plot line I approve of for the time being.

Speaking of the Daleks, this was definitely a better story for them than the previous centre stage number back in Series 5. Sure, seeing as many versions of the evil pepper pots was all fun to behold but the actual insanity of the Daleks was actually nicely explored in this particular episode.

Their concept of beauty may disgust the Doctor but they still managed to abduct him, Amy and Rory and force them down to the Asylum planetoid in order to for them to actually kill the more wretched of Daleks down there. As for the idea of human Daleks, it may bring back bad memories of that Series 3 two-parter but again, the idea was actually more horrifying to watch here with Oswin’s dead crew mates, Darla Von Karlsson and even nearly at point, Amy and Rory, though they managed to avoid that fate truly happening to them.

Keeping with the Ponds for a moment – I kind of thought the near divorce//instant reunion was a little rushed but at least their reasons for nearly breaking up for good were believable. Amy feared that by not being able to have children, Rory wouldn’t want her and once again, he assured her that wasn’t the case. Dramatically, it was definitely a good episode for them, even if at times they were a little overshadowed by Oswin.

Though to be brutally honest, if any main character was underused in this episode, it was probably the Doctor. Maybe it was because of the set up for Oswin/Clara, the Ponds personal issues or even the Daleks and their depravity but the Doctor did seem a little underused in this one, though his method of figuring out Oswin’s identity was incredibly effective and devastating, so points there.

Also in “Asylum Of The Daleks”

The credits have been slightly changed for the series, with bits of green/black/smaller writing/logo adjusting to be had. And no, Jenna-Louise Coleman’s name wasn’t in the opening credits.

Amy (re divorce papers): “And then we’re not married?”
Rory: “Just like magic.”

Amy’s still doing the modelling gigs (one which included having Love/Hate on her knuckles) while Rory is still at his old job.

Dalek Prime Minister: “Does it surprise you to know the Daleks have a concept of beauty?”
The Doctor: “I thought you’d run out of ways to make me sick, but hello again! You think hatred is beautiful?”

In the opening scenes to this episode, which were narrated by Darla, we actually saw her and the Doctor on Skaro when she abducted him for the Daleks. The thing about her daughter was a not so clever ruse the Doctor saw through.

The Doctor: “Don’t worry, we’ll get through this, I promise. Don’t be scared.”
Amy: “Scared? Who’s scared? Geronimo!”

Oswin (to Rory): “First boy I ever fancied was called Rory. Actually, she was called Nina. I was going through a phase. Just flirting to keep you cheerful.”

Speaking of cheerful, Oswin’s nicknames for the Doctor included both “chins” and “Chinboy”. She also commented on Rory’s nose as well.

Rory: “Who killed all the Daleks?”
The Doctor: “Who do you think?”

Rory (to Amy): “Basic fact of our relationship is that I love you more than you love me.”

The Doctor and Oswin managed to reverse a Dalek into blowing up it’s comrades, the thing with eggs was the clue to Oswin’s identity and her ship/mission was ALASKA.

Oswin (to the Doctor): “Rescue me, Chinboy and show me the stars.”

Oswin (re the Doctor): “Run you clever boy and remember.”

Standout music: Murray Gold gave a rather unsettling score during Amy’s delirious moments and a heartbreaking one with Oswin’s reveal as well as the general use of Carmen throughout.

Chronology: Several months since “Pond Life” presumably and instead of Confidential, there are now three minute webisodes for each episode of this series.

If “Asylum Of The Daleks” proved anything, it’s that the blockbuster movie format for Series 7 may very well work in Steven Moffat’s favour after all. The effect on this episode alone were stunning, the amount of Daleks captivating but of course, it was the character drama from the Doctor, Amy, Rory and Oswin that was the best thing of all. An excellent opening story for a show that was gone too long.