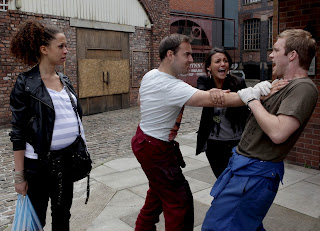 Coronation Street: Not the best month we've had. Still don't really care about Gary and Izzy's surrogacy storyline (which still seems rushed) and the arrival of Stella's overbearing mother Gloria hasn't proved too exciting but at least Kirsty has given birth to a baby she called Ruby and the storylines with her and Tyrone continue to be interesting as she struggles with motherhood and the return of her parents while turning everyone against Tommy and Tina. 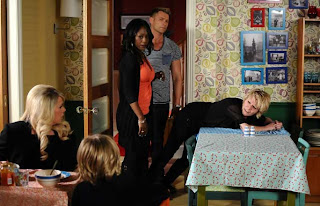 EastEnders: Actually a pretty solid month for storylines. Carly briefly returned and took Shirley out of Walford with her, Kat's affair was revealed to Alfie (and her mystery shagger narrowed to a Branning, naturally), Sharon was revealed to have an addiction while continuing her flirty banter with Jack, we got a new character in Danny, giving Christian and Syed some storyline before their exit in November and of course, Janine's paranoia got the best of her and she left Michael and Scarlett as well. Already I miss her. 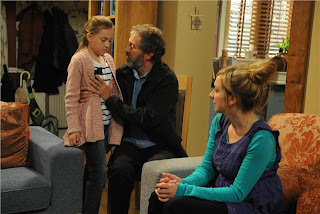 Emmerdale: I wish the writers would realise just how little chemistry both Laurel and Marlon actually have because their whole relationship has been mostly a source of tedium for the last month, especially with the merging of Marlon's destroyed friendships with Paddy and Rhona and well, basically, it's just rubbish to watch. At least Carl being back to his mercilessly scheming ways with Chas and Cameron provided some entertainment this month. 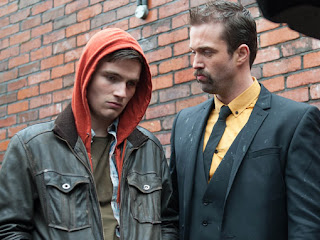 Hollyoaks: This year's Later finally pushed Brendan into darker territory than I think he can recover from but on the plus side, it also revealed more about his childhood and the inevitable war between him and Walker is looking good. It was also nice to see some more on Joel's backstory but did we really have to suffer the gormless idiots that are Bart, Jono and Neil and their boring antics in Amsterdam? It's just as bad as Maddie's pathetic campaign against Esther, Ally's myriad of lies and Doug's new found clingy attitude with Ste as well. On the plus side, the Rhys/Cindy tryst despite coming out of nowhere is fun to watch and Mercedes new levels of craziness in order to get back at Riley and Mitzeee has also been rather compelling to watch in it's own way.
Posted by shawnlunn2002 at 5:59 AM