My Review of Torchwood's 4x05: "The Categories Of Life" 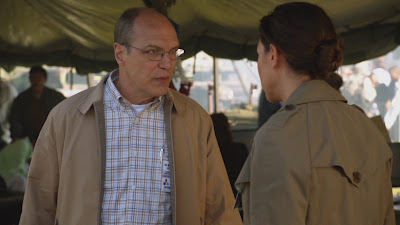 Oh, Vera, you really should have done your homework. Even when the world is immune to death, Torchwood’s almost monstrous knack for having its staffers killed can’t seem to take a break. I know this was coming but why did it have to come now?

Couldn’t Vera have made it through a few more episodes without ending up as a casualty? I guess not and as deaths go here, Vera’s wasn’t dignified and it wasn’t heroic but it sadly was believable and if there’s one thing this season is excelling at, it’s in the depiction of how human beings can become ruthless bastards in great peril.

Slimy Colin Maloney had no problem in causing misery to the poor people that he had hidden away from the public and when Vera threatened to expose him, he also had no problem in shooting her down and incinerating her. I hope for Vera’s sake, she actually is dead because no one should suffer that level of torture if she did survive being burned alive.

The episode wasted no time in showing the sinister side to the overflow camps, which means that it finally feels like this show is progressing with the storyline and that’s something to be pleased about. That being said, there are some logic gaps in relation to the overflow camp situation.

I find it a little to believe that more liberal countries would quickly cave into the idea of packing people off and I certainly find it hard to believe that for all her intelligence, that Gwen would be a tad reckless as well in her attempts to get her father. Don’t get me wrong, I applaud her determination, it’s just her planning that seemed to lack common sense.

Trying to demand her father out of the overflow camp was never going to work, even with Andy trying to use his police status and what was the point of using a fake ID when Gwen practically told those sarcastic soldiers who she was? And then there was the rescue attempt with Geraint – sadly not Gwen’s finest hour.

Instead of getting her father to safety, Gwen managed to endanger the poor man up the first category and seeing what’s just happened to Vera, Gwen really doesn’t have much time to spare before her own father could end up incinerated and that’s something the episode’s ending forced her to confront as well.

Speaking of confrontations, I just loved the exchange between Jack and Oswald in this episode as well. As if PhiCorp trying to manipulate Oswald wasn’t enough, Jack attempted to have a go at it but getting Oswald to expose PhiCorp’s prior knowledge to the miracle and for a moment, it did look like Jack was going to win.

Seeing Oswald working a crowd would’ve normally been a highlight for me because usually it is intriguing to see villains manipulate the general public but here, it was actually sickening to watch. Even though Bill Pullman is doing the best he can with this show, I find Oswald too abhorrent to root for in any way and the fact that people are stupid to follow him and believe the angel theory from Oswald is every bit as sickening as the overflow camp situation.

As for the rest of the episode – who was that guy talking to Jilly before Oswald? One of PhiCorp’s head lackey or someone else who’s interested in her PR skills? Four episodes in and Jilly is still more of an enigma than a lot of the other characters. I hope we learn more about her soon because I don’t think Lauren Ambrose has many more episodes left to go in the series and I find her character more fascinating than Oswald.

Similarly fascinating was the fact that this episode was the first one where Rex managed not to annoy me from start to finish. He was funny, helpful and clearly devastated when having to witness Vera’s demise. All in all, if we get more episodes like this with Rex, he could be more entertaining to watch.

The only character who I felt was a little short changed in this episode was Esther. Sure, she was there to help Rex and Vera during the overflow camp scenes in San Pedro and she had two nice scenes with Jack but I don’t know, maybe something was off with Esther this week or something. Still, I continue to like her a lot more than other fans seem to do.

Also in “The Categories Of Life”

Category 1: No brain function, Category 2: Ordinary people with minor problems and Category 3: People in between life and death, Rex for example.

Vera (to Rex): “Oh, I’m doing a lot more than that. I’m joining the cause. Whatever you’re doing to fight this miracle, count me in.”

This was the first episode since “The New World” where half the action was based in Wales. Now that is definitely something I want to see more of.

Jack: “All I get is a kiss?”
Esther: “You look after yourself. You’re unique, you’re Category Jack, so don’t get yourself into trouble.”

Loved Jack telling the paramedic that Rex was his boyfriend for the latter’s reaction as well as Gwen and Rhys’s flirting at the airport. Gwen’s also still using her Yvonne Pallister alias – in this episode as a nurse.

Jilly (to Oswald): “Don’t get angry. Careful with the bloodlust, it’s showing.”

Phil Collins was mentioned in this episode. I wonder if we will see an actual known celebrity during this miracle debacle.

Oswald (to the miracle rally): “The truth is, I know what I am and I know what you are too. Yes, I do. Each and every one of you.”

Chronology: A couple of hours since “Escape To LA.”

This was an odd episode. In some ways, “The Categories Of Life” had excellent humour, forwarded the plot and had some suitable gore but I guess while I am enjoying the season for the most part, it doesn’t feel like the show I started watching back in 2006.