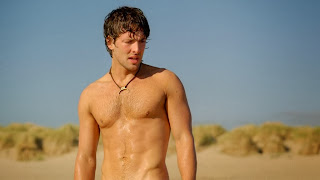 Hercules: “Whoever heard of a hero called Jason?”

Okay, let’s get some basics out of the way first, shall we? If you’re looking for a historically accurate show about Greek mythology, you’re going to have to avoid this one like the plague. It’s going to play fast and loose and pretty much merge various myths and do some rewriting of it’s own. In other words, not quite unlike it’s predecessor Merlin there.

Leading to the second bit – the comparisons between this show and it’s predecessor are hard to ignore and watching this episode will certainly give you a sense of déjà vu or whiplash, depending on your levels of patience. Aside from that, this was actually a decent enough start to what the BBC are hoping will be another success story for them in terms of Saturday night tea time dramas.

Jason himself (Jack Donnelly) pretty much enters the show by being from the present day, going down into the ocean in a submarine in a quest to find his father’s wreckage and then gets transported to the mythical city of Atlantis. Once he’s there and getting into scrapes, he’s also making friends with both Pythagoras (Robert Emms) and Hercules (Mark Addy) respectively.

The dynamic between the three is certainly played for laughs with moments of seriousness as both Pythagoras and Hercules seemed to be at odds with Jason staying with them while the former and Jason then ended up saving Hercules from deserting the city on the night before being forced to pick between being spared or sacrificed to the Minotaur itself. Again, best not to expect historical accuracy here folks.

The Minotaur plot is an oddity for this opening episode. Personally I’m not bothered that it’s being reworked so that Jason, Pythagoras and Hercules are the ones facing it but despite all the hype with the black (sacrifice) and white (spared) stones, the Minotaur itself was actually dispatched with too quickly and only served to add some more mystery into Jason being in Atlantis in the first place.

I have to give the episode credit for not wasting time in revealing some stuff, thanks to the Oracle. While I hope Juliet Stevenson is given more weighty material as the series progresses I did like that the Oracle informed Jason that he was originally from Atlantis and that many people will try to kill him if they realise who he actually is. I guess we’re going to have to wait a little longer before finding out who his parents are though.

When the episode wasn’t dealing with various prophecies, discussions on destiny and Minotaurs, we also got to see the rulers of Atlantis as well. Pasiphae (Sarah Parish) definitely seems to be the tyrant of the bunch compared to her husband (Alexander Siddig) while Ariadne (Aiysha Hart) seemed more sympathetic to the civilians’ plight with the Minotaur while barely concealing her attraction to Jason.

None of the characters aside from the three leads – Jason, Pythagoras and Hercules seem to be drawn out just yet but it’s the first episode and there are twelve more to see how layered the likes of the Oracle, Minos, Pasiphae, Ariadne and by next week, Medusa will be. Hopefully the show won’t let us down on that front.

In terms of the friendship between Jason, Pythagoras and Hercules, it’s clearly going to be the heart of the show and the dynamic between Jason and Pythagoras in particular will inevitably drawn comparisons to Merlin and Arthur. Though whether or not it will be as hyped as theirs was remains to be seen. I think it will be a success though.

Also in “The Earth Bull”

Jason’s necklace was the symbol seen in the Oracle’s temple and guess what the submarine was named as well? Ariadne also gave him hers to guide him in the Labryrinth as well.

Pythagoras: “You’re in Atlantis.”
Jason: “Atlantis? As in the lost city of Atlantis?”

Amazing how Jason wound up naked and there was a set of clothes handy for him to change into upon his arrival to Atlantis.

Jason: “You’re the triangle guy.”
Pythagoras: “How did you know I’ve been thinking about triangles?”

The Oracle (to Jason): “You have many enemies here in Atlantis. You must tell no-on that you’ve journeyed through the gateway.”

In case you were wondering – Pythagoras/Jason have been given the name of Python.

Pasiphae: “How dare you question your father! You bring shame on your family.”
Ariadne: “It is not I who bring shame.”

This episode managed to pull in over five million viewers for BBC1 during the weekend. It’s a good start, hopefully they can keep it going.

Ariadne: “Do you believe you can succeed where so many have failed?”
Jason: “I cannot explain it but it was as if for the first time in my life I am absolutely certain of what I must do.”

The Oracle: “The earth bull has been slain.”

Chronology: Present day for about two minutes before Ancient Greece of course.

As an opening episode goes, “The Earth Bull” won’t go down as the most innovative of introductions and perhaps the over familiarity of certain tropes from Merlin will not work in the series favour but I plan to stick with Jason and the gang at least for the next few months.