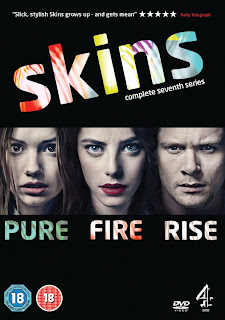 All Grown Up?: The one thing I have consistently enjoyed about Skins over it's seven year run is that it has consistently always played by it's own rules. This has always been a series that has never had a problem with taking it's characters into some of the darker of places or changing it's own cast every two years with gleeful abandon.

The seventh and final series, comprising of six episodes broken into the stories - Fire, Pure and Rise however decided it was time to bring back at least five of the show's most popular characters from the first four series. While a part of me was annoyed with the show's decision not to include anyone from the previous two series, the characters chosen for this last chapter are certainly put through the ringer of sorts.

Fire itself takes in London over several months and mainly dealt with Effy thrown into the cutthroat world of investment and the consequences that the world had when she slept with her boss (Kayvan Novak) and committed a little bit of fraud on the side. The result are grim for Effy but they're nowhere near as grim for viewers than the outcome of Emily and Naomi in this story.

Arguably the most successful couple that Skins had ever produced, Fire not only had them barely interacting with each other (Emily's mainly in New York) but when Naomi fell ill, it took until literally the last minute for Emily to be informed and able to see her ailing girlfriend. I know this show has bumped off main characters in the past but this time, it felt more like a slap in the face.

However as frustrating as the first two parter was by it's second half, it's the second story of the bunch that really lets things down. Pure was the first time since 2008 that we had seen Hannah Murray playing the role of blissful Cassie and sadly for her, she had nothing worthwhile in the whole two episodes.

There was a great subplot with her father and brother struggling to cope with the death of Cassie's mother but it's barely touched upon in a favour of a dull stalker plotline with an annoying co-worker and some pretentious waffle with photography. It's a shame because Murray is good and there's some nice atmosphere moments like there was in all the stories but it's such an unengaging and lifeless story, you just won't care.

The last story, Rise centring around one of my least favourite characters in Cook turned out to actually be the best of the bunch. As a series finale, it's far from perfect but it's the only story where Cook felt both in character, showed some tiny bits of growth and one where the grimness actually worked in the narrative's favour too.

I'm not gonna lie and say that I found Louie a particularly convincing baddie but his hot pursuit of Cook and the bodies that were left in both men's wake amongst a snowy backdrop was certainly effective and it added to a rather bittersweet if not perfect end to the show's seven year saga.

DVD Extras: None, strangely enough. Another missed opportunity there.

Episode Ratings From 1 To 10

Season 7 is currently available on DVD.
Posted by shawnlunn2002 at 5:27 AM